The Restoration of the Fountain of the Lions of the Alhambra: Criteria, processes and methodology 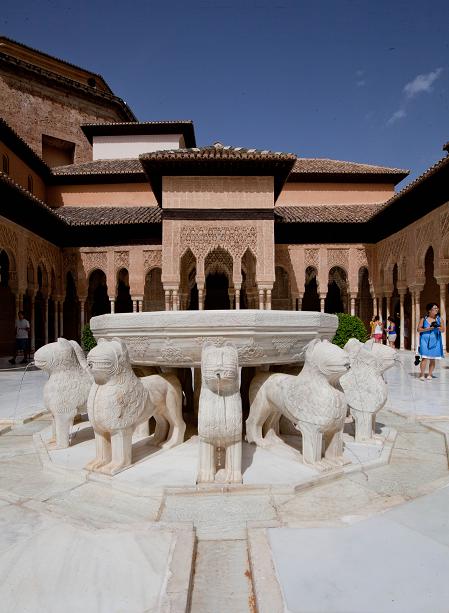 The Patronato de la Alhambra y Generalife, and the Mediterranean Centre of the University of Granada are organising the course The restoration of the Fountain of the Lions in the Alhambra: Criteria, processes and methodology, which will be held from the 17th till 21st September, 2012 in the Auditorium of the Palace of Charles V. Those who are interested in taking part in the course should make their reservation through the website of the Mediterranean Centre of Granada University, or by telephone: 958 242 922.

The objective of this course is to acquire a deeper knowledge of the Court of the Lions and its fountain, which is the principal focus of the Complex of the Nasrid Palaces. This is the courtyard which reveals at its greatest splendour the refined sensitivity of its creators and it is also the most well-known and symbolic image not only of the Alhambra, but even of the city of Granada.

The passage of time, atmospheric conditions, the reform work carried out, and even human action have been the cause of considerable deterioration to this set of sculptures and the hydraulic circuit, which are characterized by their fragile state. Due to the continuous flow of water the functioning of the fountain has also been damaged.

Thanks to the continuous work of conservation by the Patronato de la Alhambra y Generalife and, specifically, after a period of research, monitoring and analysis that began in 2002, a rigorous process of complete restoration has been under way since 2006, with respect to the figures, basin, and rest of elements that form the hydraulic system located in the Court of the Lions.

The Patronato de la Alhambra y Generalife and the Mediterranean Centre of the University of Granada, on the occasion of the 2012 summer courses, are attempting to inform the public from different approaches and methodology regarding the process of reform work on this emblematic symbol of Hispanic Muslim art.

Location: Generalife Assembly Hall of the Palace of Charles V. Historic-Artistic Complex of the Alhambra and the Generalife.

Alhambra and the Generalife