The restoration of the Court of the Lions and the Archaeology Plan, discussed by the Board 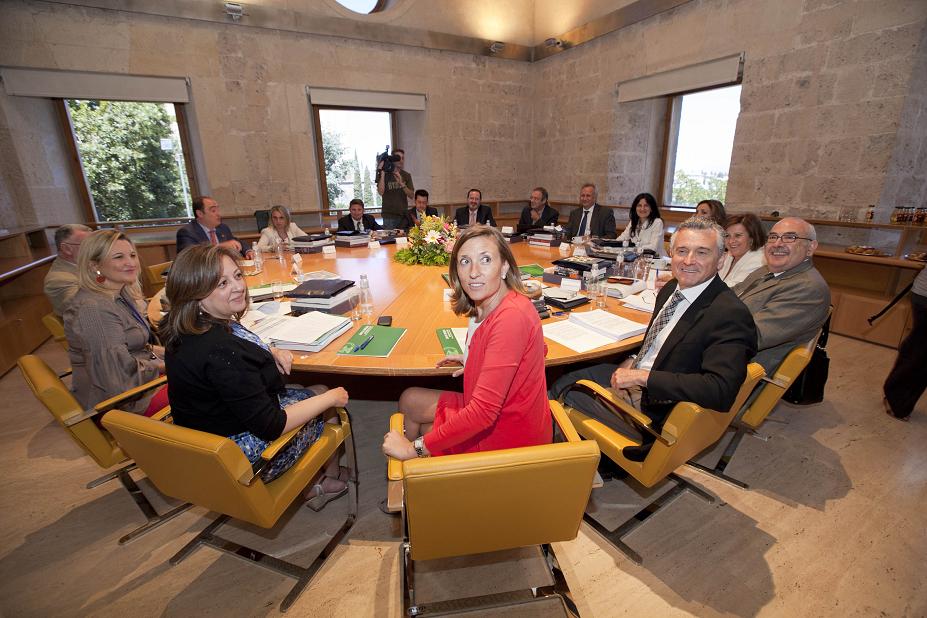 Unesco and the World Monuments Fund are benefactors

This morning, Paulino Plata, Government of Andalusia minister for Culture, chaired the first meeting of the year of the Board of Patronato de la Alhambra y Generalife (PAG), held in the Palace of Carlos V. The meeting approved the report and expenditure for 2010 and the plan of action and budget for 2011, set at €22,646,984. Other issues included the sponsorship and cooperation of a range of professional groups and public and private institutions, including the Ministry for Culture, the European Union, laCaixa, the World Monuments Fund (WMF) – for the restoration of the Partal oratory and financing for the Hidden Alhambra programme – and Cervezas Alhambra. At the proposal of the minister, the PAG admitted UNESCO and WMF as benefactors.
The admittance of benefactors to the trust has been possible according to the PAG statute book since June 1999. According to Plata, these incorporations aim to “consolidate strategic alliances with agents that can help us to achieve our aims”.  Under the statutes, benefactors can be “persons or institutions providing outstanding support in the form of economic contributions or donations” for the preservation and development of the site. Benefactors have speaking but not voting rights at Board meetings and are admitted for renewable periods of two years.
The main activities facing PAG this year include finalising the restoration of the Fountain of the Lions, scheduled for December 2011, and other work to the Court of the Lions; the revision of the Special Protection Plan (PEPRI) for the Alhambra and Alijares; the implementation of the Comprehensive Security Plan; the installation of the New Door project by architects Álvaro Siza and Juan Domingo Santos, winners of the Alhambra Atrium International Ideas Competition, and the 1st Phase of the Alhambra Archaeology Plan, to be put in operation by a research group headed by University of Granada professor of Mediaeval History Antonio Malpica, under a collaboration agreement with UGR.
The Board also discussed other important actions to be performed in 2011, such as the rehabilitation of the Wicker Workshops as the future location of the PAG Educational System, and the installation of a lift in the Palace of Carlos V, at a cost of €322,490, of which Fundación laCaixa will contribute €150,000 under the Accessible Alhambra programme.

The meeting also approved new projects for the Alhambra Sustainability Laboratory, focussing on analysing the impact of tourism on the site, and an economic study on the direct-indirect-induced impact of the Alhambra site on the city and province; the continuation of the cataloguing of the Museum of the Alhambra under the DOMUS integrated system; the finalisation of the works on the document depository of the Alhambra for the installation of the library and archive, as per specific Government of Andalusia regulations for depositories; the cataloguing and restoration of the Leopoldo Torres Balbás collection, and the finalisation of the Alhambra Oral Memory and Audiovisual Memory project.
Plata praised the consolidation of the site’s cultural offer, with exhibitions such as M.C. Escher. Infinite Universes in the Science Park and Palace of Carlos V; an exhibition on English architect Owen Jones scheduled for October, in collaboration with the Victoria & Albert Museum, and the forthcoming inauguration of Dialogues: Baroque paintings from Andalusian Museums in the Hermitage Museum. Plata underlined the importance of the site after 25 years of management by the Government of Andalusia, described in the exhibition La Alhambra crece (The growing Alhambra), which deals with some of the works acquired over this time, and the course organised with the University of Granada Centro Mediterráneo on the period.
The Board also discussed the co-production of the show Federico según Lorca, to be held in the Generalife gardens, as part of the Lorca and Granada programme. The show, staged by Eva Yerbabuena, is a public-private initiative and will be premiered as part of the 60th International Festival of Music and Dance.
Finally, Plata spoke of the consolidation of budget funding from the Ministry for Culture for work on Gate of the Pomegranates, the Seat of the Moor and the Generalife’s mediaeval kitchen gardens.