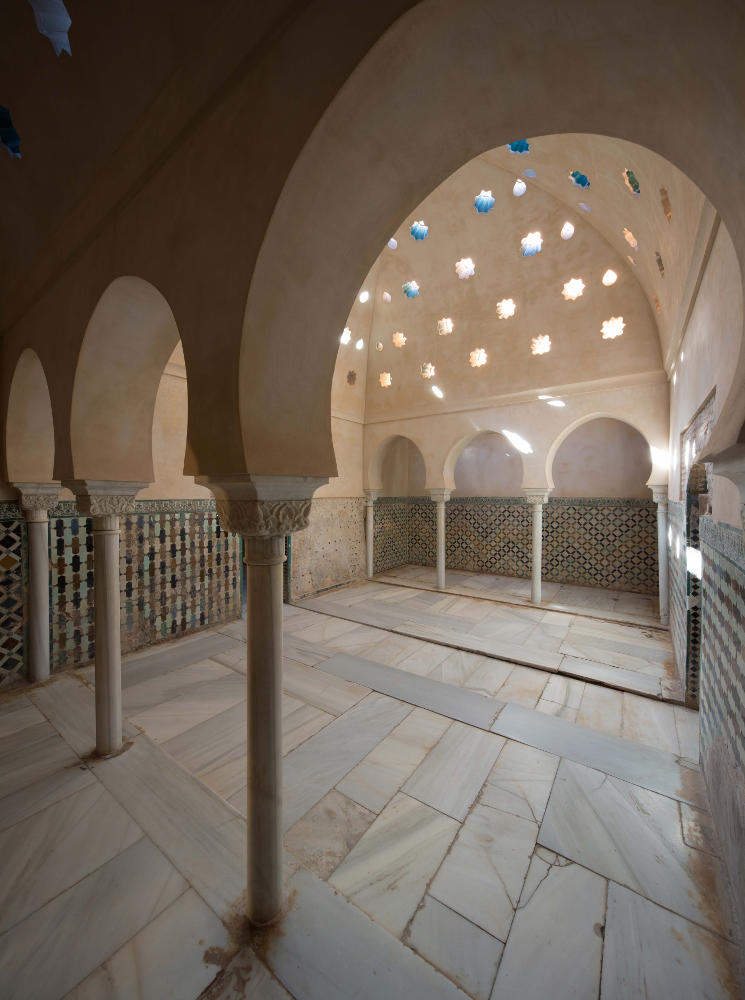 The baths being essential Moorish urban elements, it is easy to understand why each palace in the Alhambra has its own baths.

Particularly notable among the unique features of Islamic architecture preserved at the Alhambra is the hammam: the Comares Bath, until recently called the Royal Bath due to having been reserved for the personal use of the Catholic Monarchs. Today we know that each palace of the Alhambra had its own hammam, but this is the only Islamic medieval baths which has been practically fully preserved in the West. Taken from Roman baths by Islamic culture, it soon became an essential element in the Muslim world.

The rooms of the baths of the Alhambra, due to their state of preservation and special nature, are not regularly visited, in order to preserve them as well as possible; however they can be viewed from other spaces through gaps.

Located between the palaces of Comares and Lions, near the bedrooms of the palace, it has a direct door onto the patio, next to the corridor in which the Sultan lived and governed.

These baths have preserved all elements quite well, with structural alterations due to a change of use and maintenance which was more symbolic than functional. The entrance, on the same level as the patio of the Arrayanes, leads to a first vestibular space for undressing, with an alcove and a separate latrine with a vent.

The first apodyterium descends by a steep staircase to the rest room, called the bayt al-maslaj, which is perhaps the most notable place in the baths, with the so-called Bed room, due to the two large, slightly elevated chambers flanking the main room.

This whole space was vented and lit with a skylight, through a central lantern, very common in Nasrid architecture. The decorative elements of the room, fountain, flooring, columns, tiling and plasterwork are largely original, although ceilings and plasterwork were repaired and repainted with bright colors in the second half of the 19th century. The doors which flank the beds form part of the baths’ original structure: in addition, parallel to its entrance is a service storeroom; the edges lead to a latrine behind the alcove, and the steam rooms of the baths.

The whole steam area of the hammam is covered with vaults perforated with a multitude of slightly conical skylights, with lobed and star shapes. With openable windows on the exterior face, the bathroom servants opened them or closed them to regulate the steam atmosphere in the rooms.

Following this is a smaller space and passage, called bayt al-barid, with a basin of cold water, followed by the central area of the baths or bayt al-wastani, a large room heated with a central area flanked by slightly pointed triple horseshoe arches.

Facing the entrance, another doorway leads to the final heated room of the baths, the bayt al-sajun, at the ends of which, under large iwans, two large basins pour cold and hot water. Under the floor of this room is the hypocaust, next to which, behind the blind arch, are the furnace (al-furn) and the boiler, with a woodshed nearby to store the material to burn, and the rear service door.

The steam rooms have marble floors, under which there are pipes for maintaining the heat, therefore in these rooms, thick-soled footwear had to be worn. In the same way, earthen channels of different sizes and diameters were installed in the walls to vent the hot air and steam from the boiler and reach the necessary temperature and humidity for the baths.

In the 16th century, some ceramic baseboards of these rooms were renovated, on some of which, the abbreviation of the imperial “Plus Ultra” could be read, and a modern output installed, through the adjoining Lindaraja patio.

Due to its uniqueness, for visitors and artists the Comares Bath has been one of the main points of fascination in the whole Alhambra. From Jerónimo Münzer in 1494, to avant-garde Henry Matisse in 1910, people have been captivated by the atmosphere and the mystery of its light. The wealth of visual artists who have depicted it is extensive, notably the writings of Alexandre Laborde (1812), the notes of Richard Ford (1831) and the plan made by James Cavanah Murphy (1813) with details such as the circuit of pipes and the boiler of the baths.

Pay special attention to the Palacios entry time marked in red. The space can only be accessed at the time indicated in the entry. The rest of the view of the momumental set can be made during the general opening hours.