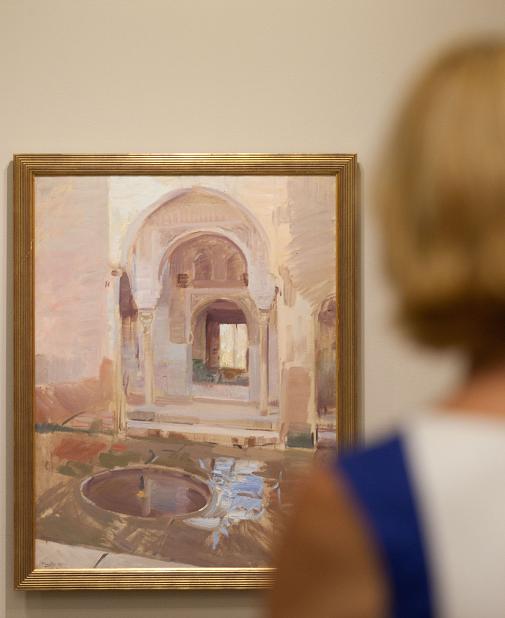 The Patronato de la Alhambra y Generalife and the Mediterranean Centre of the University of Granada, are organizing a symposium, Sorolla, his Last era, on the occasion of the exhibition Gardens of Light, which will be held in the in the Palace of Charles V on 12th and 13th September, 2012. It will be chaired by Tomàs Llorens, Blanca Pons-Sorolla, María López, and Boye Llorens. Reservations to participate can be made on the symposium web page or telephong 958 242 922.

Sorolla’s artistic career reached professional fulfilment after being awarded with the gold medal at the Paris World Fair of 1900. The first decade of the 20th century witnessed a series of large-scale international exhibitions in Paris (1906), Berlin (1907), London (1908), New York (1909) and Chicago (1911). As from 1911 the artist decided against participating in big exhibitions and focused on the commission from the Hispanic Society of America. He did not complete the task until 1919, not long before a stroke put an end to his creative career.

As historiographic sources unanimously state, the U.S. commission encouraged the painter to seek a more restsrained and objective style in keeping with the choral and epic conception of the project. Nevertheless, during that decade –which would be the last of his career- Sorolla also carried out a series of paintings whose inspiration followed the opposite direction to the series of the Hispanic Society.

He accomplished mainly medium-size paintings, created merely for the pleasure of painting, almost always without human figures and created with great confidence, without sketches or preliminary studies. They reveal a deeply lyrical and introspective style. This was evidence of a silent meditation that grew as years went by, and the painter progressively abandoned technical perfection and preferred to concentrate on the most essential characteristics of colour and light.

We can appreciate the source of Sorolla’s new style in a series of paintings on the Alcazar of Seville and the Alhambra in that the artist carried out as from 1908.  Sorolla was especially interested in the gardens of both monuments. In fact he was so interested that he took them as a model for the domestic garden that he was planning and laying out in his home-studio in Madrid. This was to be the focus of the favourite theme of his later painting.

The aim of the symposium is to study Sorolla’s way of painting in his later years. This is an aspect of his painting that has received little historiographic attention up until now and which reveals aesthetic interests that contradict some of the most widely spread clichés about the artist.

In an attempt to understand his works to a fuller extent, special attention will be given to the cultural –and especially literary- context of Sorolla’s later years.  Besides, the privileged role played by the figure of “the garden of the painter” in the later works of some contemporary artists such as Monet or Liebermann will be taken into account. We must take into account the historic context of this works set between two different periods: the late spread of symbolism and the general feeling of the end of an era together with the arrival and establishment of approaches that reflected the new sensitivity of the 20th century. An example of this, in Spain, is the “pure poetry” of Juan Ramón Jiménez.