Prized exhibits of the Museum of the Alhambra. Jewellery 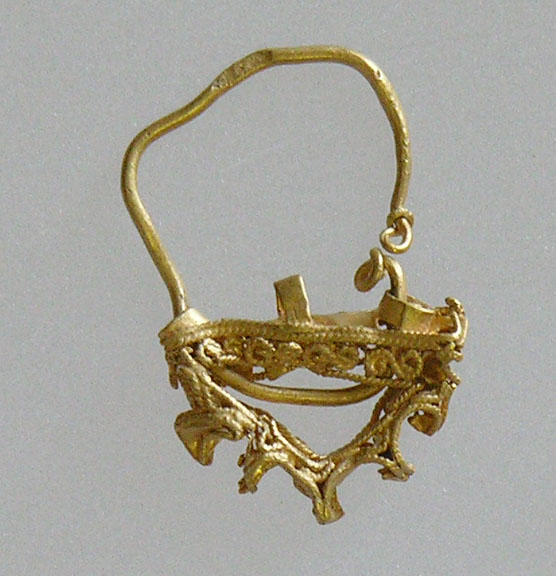 Hispano-Muslim jewellery is known above all thanks to the large number of hoards that have been discovered. There are also some descriptions of jewellery in written sources with explanations of how they were used. Some particularly interesting descriptions have been found in letters written to accompany Morisco dowries.
The surviving pieces suggest that a wide variety of shapes, manufacturing techniques and materials were used.
The most highly prized jewels were those made of gold and silver but we also have a number of pieces made with other less fine metals used by the different social classes.
In addition to the various different metals, these jewels were also decorated with precious and semiprecious stones, pearls and glass. Glass was widely used in the decoration of jewels either as a cabochon or as beads.
Other kinds of jewels included those thought to act as talismans such as the hamsa (a hand-shaped amulet) or the glass bracelets often placed on children’s wrists to ward off the evil eye.

JEWELLERY IN THE EMIRATE ERA
The Museum of the Alhambra has a number of objects from a hoard discovered at Medina Elvira (the former site of Granada), including three fragments from the same ajorca (solid bracelet). This item of jewellery could be worn on the arm, the wrist or the ankle.
This piece was made out of plated silver formed by joining four hollow cylinders which are twisted together like twine. Remains of a decoration in filigree have also been conserved. The clasp for closing the bracelet is at one of the ends. These hollow cylinders were probably filled with a paste made from mastic resin, remains of which have been found in similar pieces.
Researchers were able to date this ajorca because of the three Emirate-era coins found with it. Two of these coins have been perforated and still have a ring from which they could be hung as a decorative jewellery item.

JEWELLERY IN THE NASRID PERIOD
Examples of jewellery from the Nasrid period include several golden earrings. With a lobster clasp worked with rolled-up threads and unbased filigree, and decorated with enamel, cabochons, pearl necklaces and glass beads.
We also have fragments from the same gold ajorca, made by joining two sheets. The inside is undecorated while the outside is adorned with embossed geometric shapes. These fragments have lost their original shape as the paste filling that maintained the shape has disappeared.
The pieces with reference numbers R2803 and R. 2805 are buttons or adornments to be worn on clothes. The first has an engraving in the shape of a flower and the second has filigree appliqués. R.2804 is a pendant that once belonged to a hayte or necklace. This is one of the hanging pieces that were commonly used in necklaces as were alcorcíes (star-shaped pendants). It is in the shape of a pyramid and has a ring at the top for joining it to the necklace. It was made in gold sheet and is decorated with filigree and embossed on both sides.
Number 1099 is a cord-type necklace meticulously braided with gold thread.
Rings made of less fine metals such as bronze were popular and many have been found. The decoration centred on a seal decorated with a chiselled engraving technique. The first one shows a horizontal cartouche, which suggests that it may have been epigraphic, with plant motifs on the sides. The other, R. 7141, has a decoration centred on a triangle whose angles develop into a palm, while snake-like shoots ending in palms extend from the sides of the ring.
Most of these objects come from the Alhambra or nearby, from the hoard found in the River Darro or the group of pieces found in restoration work on the SE stairwell of the Courtyard of the Water-Channel, from the D?r al-Manlaka al-Sac?da in the Generalife estate.

GLASS JEWELLERY
All the rings have been worked and stamped. They are monochrome pieces made of very dark glass.
These black bracelets (R 12005 and 12004) are among the few complete pieces of this kind held at the Museum of the Alhambra. There are various hypotheses as to their use. Some authors consider that they were used as a substitute for pieces made of jet black, which were in fashion in Roman times. However Patrice Cressier and others think that: “these bracelets were probably trinkets with a prophylactic function, a kind of amulet to protect the wearer against certain diseases and the sinister evil eye, without forgetting their possible function as a sign of social status and even of religious persuasion”. These bracelets are normally very small in diameter, perhaps because they were worn above all by children.