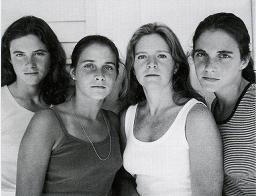 Location: Chapel of the Palace of Carlos V.
Date: 6 May – 7 June, 2009.
Visiting hours: 9:00 – 20:00, Monday – Sunday.
Free entrance.
The American artist Nicholas Nixon has explored the portraiture and the social photography since the 1970s. Time, human fragility and abandonment are recurrent subjects in his photographs where his work gets more interesting and private, as in the series of the elderly in old people’s homes, AIDS terminal patients or his best known work, The Brown Sisters. These are subjects lived by the artist, concerning private experiences, but at the same time they evoke experiences of our own lives and deep emotions.
The Brown Sisters stands halfway between documentary objectivity and emotional intimacy. We accompany to this family from youth to maturity; we are privileged spectators of their slow ageing, of the physical transformation which changes subtly each year. That´s how the series turns into a chronicle, a methodical annual, but also into an intelligent and powerful essay on the portraiture and the passage of time. Nixon exploits naturally one of the primary qualities of photography: the nostalgia caused by its capacity to stop the time, and that makes it an art that shows implacably the vulnerability of the persons and the irreparable passage of life.
The series has some formal constants: Although Nixon realizes twelve exposures, he selects only one each year; the sisters are always placed in the same order and, with some exceptions, in front pose, looking at the camera. Natural lighting is used, normally outdoors. In some photographs Nixon crept in between them with his shadow.
Several aspects make this series a masterpiece of Modern Photography: in the formal aspect, Nixon uses an eight-by-ten-inch view camera, which gives the images technical perfection, precision and clarity. In addition, the photographs are loaded with meanings: The time, which is unseizable; an emotion in which the devise of repetition – connected with the serial works developed widely by the Avant-garde – achieves a narrative effect by accumulation, in a calm way and without dramatic qualities.
Finally, this selection of photographs seems to confront us with a private and familiar scene: the artist´s wife and his sisters-in-law. But waching the images we discover something more: the series is on a family, but especially on one person: his wife, Bebe, the second one from the right, who always looks at the camera, to Nick. This series is also a homage for a wonderful person who has accompanied Nixon in the adventure of his life.
The director of the ‘Patronato de la Alhambra y el Generalife’, María del Mar Villafranca indicates that “the presentation in the Alhambra of these portrait series as a metaphor for the passage of time is an opportunity to connect the history of an extraordinary monumental complex, passing the centuries, with the photograph series of a human story close to us”.
Mapfre Collections. Nicholas Nixon.