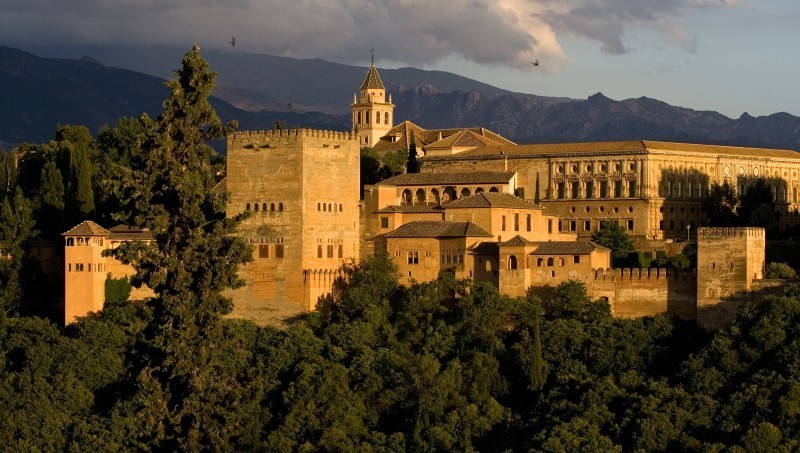 The Alhambra of andalusi and islamic tradition, was a city born for the servide of the Court

The Nasrid Alhambra was a palatine city, designed and built for the service of the Court. Its urban structure, inheriting the purest Andalusian and Islamic tradition, is perfectly organized in its development over the two and a half centuries of existence, with the logical transformations which imply an unstable sultanate and changing politics depending on pacts and vassalage.

A military complex for elite guard guaranteed the interior security of the Sultan, his family and the Government Institutions from the Alcazaba. The Alcazaba was like an independent military city, strategically located and cleverly connected with the rest of the Alhambra, where the guards lived with their families, with homes, a water cistern and baths, as in any quarter of a city.

There was a palatial area reserved for the life of the Sultan and his closest family. Here there were administrative offices, with a clearly formal layout, becoming more private and palatial depending on their departments. There were also spaces for Surah meetings and Councils of Viziers (ministers) and for public audiences. The Sultan called courtly parties coinciding with notable celebrations in the Muslim or State calendar.

In this palatine area, several palaces are set out, built in different periods, either through the adaptation and redecoration of their predecessor, or through the construction or addition of a new palace on its land. A street, with access to different areas of the palaces, would also serve to separate and isolate them from the rest of the Alhambra.
Serving this court was the Alhambra Medina, a whole city designed to cover any need of the Palace. Organized around a main street ascending slightly from west to east, the city had public baths, a mosque, shops, etc.
Next to the Mosque were the Rauda or Cemetery of the Sultans and a Madrasa.

In the lower are, behind the Puerta del Vino which served as the main entrance, there were houses, some very important, where civil servants and Court servants lived, small water cisterns and public spaces. Toward the middle of the street and along its sides are two large areas considered true palaces: the Hall of the Abencerrajes and what was formerly the Convent of San Francisco.

The upper area of the city was occupied by a range of small traditional industries: furnaces for glass and ceramic, a tannery for leather, waterwheels and even a mint for making currency.
The Acequia del Rey (or Sultan) entered the Alhambra through this area, through an aqueduct and a hatch, descending parallel to Calle Real, distributing water to the whole complex through countless channels. Small streets, alleys and small shelters made up the urban landscape of the cit.

The whole Alhambra was surrounded by a wall which made it unassailable in any attack, connecting it with the general wall of Granada. It had four main doors, two the the north – Armas and Arrabal – and two the the south – Justicia and Siete Suelos.

Passing through the traditional medina, the remains of buildings can be seen with furnaces for ceramic, and houses.
The Alhambra is entered through the medina traditionally known as “Secano”. Moving along an archaeological walkway where in addition to the start of the Acequia Real through the Aqueduct, the remains of buildings can be seen with furnaces for ceramic, tanneries and houses next to the internal side of the wall with its towers, partially destroyed in the withdrawal of Napoleonic troops in 1812.
On this archaeological walkway through the Upper Alhambra its main entrance can be observed from the exterior of the wall: the Puerta de los Siete Suelos, one of the four of the complex.
At this high point, the Upper Alhambra, there is an excellent panoramic view of the Sierra Nevada, over the wall of the section, as well as the Cerro del Sol, the natural rear-guard of the fortress.
Here a path begins through cypresses cut to form arches, designed in the 1930s, as well as the adjacent gardens, making the archaeological ruins of this area visitable.
Between the cypress arches, to the right a partial view of the Convent of San Francisco, can be observed, built in the 16th century on an Islamic mansion, currently a National Tourism Viewpoint.
To the left, at a lower level, the remains of several Nasrid houses can be identified, brought to light in the 1930s by architect Leopoldo Torres Balbás.

The main artery of the sophisticated water system, allowing the permanent presence of water in the palatine city
The Alhambra cannot be discussed without evaluating the element which allowed its establishment – water. Without it, what the Alhambra was and continues to be would not have been possible.
The water reached this hill thanks to a sophisticated and intelligent water system which would allow it to be collected from the Darro river and distributed through the Acequia Real, as the main artery, and a secondary network of smaller channels supported by waterwheels and tanks, allowing the transformation of this land into a rich, inhabitable orchard.
The same system which allowed the design of its palaces and gardens with a permanent presence, both visual and audible, with formal resources of great beauty and symbolism and which made life possible in this palatine city.

A beautiful viewpoint protrudes from this building currently occupied by the National Tourism Viewpoint
Built in the 16th century on an Islamic mansion, it is currently a National Tourism Viewpoint. Among other remains, a beautiful viewpoint remains, protruding from the building, easily identifiable, inside of which the sepulchral graves of the Catholic Monarchs were prepared while the Pantheon of the Royal Chapel was constructed in the city, where their mortal remains lie today.

Descending the Street, at the bottom the Puerta del Vino can be seen, and from there, the entrance to the Alcazaba.


BATHS OF THE MOSQUE AND HOUSE

Partially preserved in the house, today an evocative Museum where Ángel Barrios was born and lived Along the Calle Real there were various public buildings, residences and small industries, some of which remain, transformed by time and with new uses.

Especially noticeable in this section of the street is the Church of Santa María de la Alhambra, completed at the beginning of the 17th century on the grounds of the Mezquita Mayor mosque, as well as its baths, partially preserved in the house where musician Ángel Barrios was born and lived, today an evocative Museum about him and the intellectual atmosphere of the first third of the 20th century.


ARCHAEOLOGICAL AREA OF THE ABENCERRAJES PALACE

Located in the upper area of the Alhambra, an important place located near the urban centre of the medina.

Located in the upper area of the Alhambra, an important place located near the urban centre of the medina, this allows us to discuss the importance of its inhabitants. This archaeological area is known as the Abencerrajes Palace, the Spanish name given to the Banu Sarray, a noble family of the Nasrid kingdom.
In 1501, the building was given by the Catholic Monarchs to Juan Chacón, Governor of Murcia, and senior accountant of the Royal Council, from then on being called the Contaduría Palace. The first renovations of the complex date to the end of the 19th century, now in ruins, the remains of its architectural structure and its urban outline remaining. In the 1930s, its study and excavation began, revealing the importance of this place.

In the main area there was a pond parallel to the wall on a central patio, presided over by a pavilion with three rooms which preceded the tripartite main room on the interior of the tower, architectural solutions later repeated in the Hall of the Abencerrajes and in the Palace of the Lions.
A small residence is attached to this main area, following the traditional architectural layout of Islamic residences, with a central patio and small pond, excavated at the end of the 20th century.

On its eastern side is a double bath, from different periods, one primitive, and the other from the period of the rule of Yusuf I (1325-1354). The first is smaller than the other, which follows the design of the baths of Comares, a resting room with an overhead lantern and top floor, containing a small water cistern, separated from the room by a small anti-damp chamber. The cold room, with lateral alcoves with columns embedded in its walls, is found across a passage where there is also a latrine. The warm room, also with lateral alcoves, had a small font for washing one’s feet. The hot room preserves the hypocaust pillars and the boiler area, having lateral alcoves like the warm and cold rooms.
Numerous decorative elements and tiles have been preserved, showing us its rich decoration.

Pay special attention to the Palacios entry time marked in red. The space can only be accessed at the time indicated in the entry. The rest of the view of the momumental set can be made during the general opening hours.