Variations on the Japanese Garden 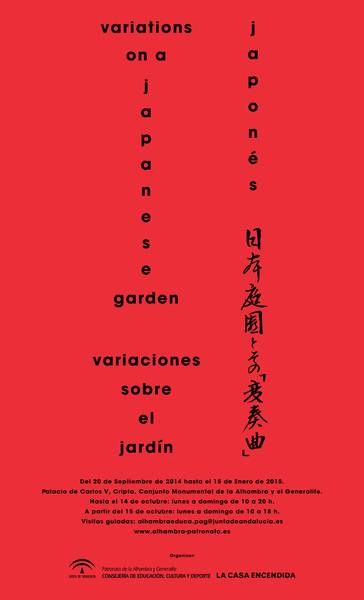 This exhibition is an invitation to walk around the edge of emptiness. It was inspired by the Ryoan-ji Zen garden in Kyoto, a dry garden from the 15th Century, which one enters merely by glancing at it. An abstract garden that imitates the inner essence of nature.
The musical term ‘variations’ appears in the title of the exhibition because the exhibition seeks to present a free composition, a dialogue between authors from very different periods, cultures and disciplines that centres around the figure of Mirei Shigemori (1896-1975).  Creator of gardens, painter, tea master and ikebana (flower arranger), Shigemori exemplifies the artistic conquest of his time, which seeks to transcend the stereotypical ideas of oriental immobility and western dynamism.
In the 1960s Shigemori impregnated himself with European art, philosophy and religions to bring new life to the Japanese garden. Defender of the concept of the “eternal modern”, his line of thought coincides with that of the “modern primitives”, who are searching for the essential energy in Japanese history (Jomon period -10,000 B.C. and Yayoi period – 300 A.D.). The aesthetics of the “modern primitive” was conceived by the poet Shuzo Takiguchi and later developed by intellectuals, poets and architects such as Kenzo Tonge.
The project tries to imitate the feats of Mirei Shigemori in his effort to combine the voices of East and West, on the basis of the time-space quality of the Japanese garden. For Shigemori the notion of micro-macro cosmos reflects the coexistence of the garden and the observer as a unique and unbreakable work of art and emphasizes the artistic function of the garden-mirror as a place for contemplation and self-knowledge.
Place: Palace of Charles V, Crypt. Alhambra and Generalife Group of Monuments
Time: Until 14th October: from Monday to Sunday from 10:00 to 20:00. From 15 October onwards: from Monday to Sunday from 10:00 to 18:00.
Guided visits: alhambraeduca.pag(at)juntadeandalucia.es