THE TENDILLA. LORDS OF THE ALHAMBRA 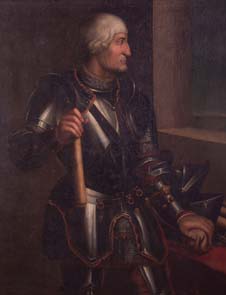 We have designed this exhibition to commemorate the death of Don Íñigo López de Mendoza (1440-1515), Count of Tendilla, because of the importance of this character in the history of Granada and the Alhambra.
Appointed governor of the Alhambra by the Catholic Monarchs, he set up house in a Nasrid palace, where he preserved the main heritage of the sultans of Granada and established a policy of understanding with both Moors and Jews. His open-minded Renaissance humanist spirit made him one of the most important wardens of the Alhambra that has survived to this day.
His successors held the post of governor of the estate until the 18th century, when King Philip V dismissed them for their support of the Austrian candidate in the War of Succession.
The exhibition is divided into several areas in which we try to give an overview of the activities of the Tendillas from the 15th to the 18th century.
The first section is devoted to "Heritage of the Mendozas: weapons, purple and the Arts", where we start with the Marquis of Santillana, a leading 15th century writer, and continue with representative works of other relatives such as Cardinal Mendoza or influential personages who were contemporaries of the Count of Tendilla, such as Cardinal Cisneros and Archbishop Talavera; all involved in shaping the modern Granada; not to mention his brother, Don Diego Hurtado de Mendoza, Archbishop of Seville, to whom some magnificent items are devoted in this exhibition.
The second area focuses on "The Great Tendilla: Don Íñigo López de Mendoza y Quiñones," attempting -through representative objects such as his abundant collection of letters and interesting audiovisual displays- to show his various facets as military man, politician, diplomat and patron of the Arts; placing particular emphasis on his activity as protector of humanists including Pedro Mártir de Anglería, tutor of his children.
The third area is devoted to the immediate successors of the governor under the title "The Mendozas of the Renaissance". These include his eldest son and heir, Luis Hurtado de Mendoza, who was responsible for the construction of the Palace of Charles V, but the children of the Great Tendilla also included other important characters such as Diego Hurtado de Mendoza, ambassador and writer (of whom the exhibition contains a magnificent portrait attributed to Titian), and Antonio de Mendoza, viceroy of New Spain and Peru. The section ends with the War of the Alpujarras, which adversely affected the power of the Tendillas because of their tolerant position with regard to the Moors.
In an intermediate area of the exhibition, taking advantage of the stairs between the two large exhibition spaces of the chapel and crypt of the Palace of Charles V, we offer a gallery of portraits of the monarchs who used the Alhambra as Royal Palace between the 15th and 18th centuries.
We also use this intermediate are to display a cabinet with weapons of exceptional quality, related to the reliefs that the architect Pedro Machuca made for the basements of the Palace of Charles V, owing the accuracy of his drawings to the availability of the extensive and well-documented armoury of the Alhambra.
In the crypt of the Palace, we have set up the fourth section called "The long decline" stretching from the War of the Alpujarras to the 18th century when the Tendillas were dispossessed of the governorship of the Alhambra by Philip V; an extensive period of great historical interest in which, from the inventory of property of Count of Tendilla VII, we reconstruct some of the furnishings (textiles, books, silverware) to be found in the various rooms of these palaces in the mid-17th century and everyday objects or items related to the governors discovered during excavations and renovations carried out in the Alhambra complex in modern times; including also a restoration of what was once the palace of the Tendilla, destroyed in the 18th century.
As an appendix to this section we finish, in the adjacent room, as an epilogue, with the family history written by Don Gaspar Ibáñez de Segovia, the last to hold the title of Governor of the Alhambra; in addition to a selected bibliography and audiovisual displays explaining the unity of the exhibition and the genealogy of the Mendozas of Granada.
CHAPEL OF PALACE OF CHARLES V. MONUMENTAL COMPLEX OF ALHAMBRA AND GENERALIFE
OPENING TIMES: Monday – Sunday, 10 a.m – 8 p.m.
6 April – 5 Jun 2016
Imagen Gallery
Imagen Gallery
alhambraeduca.pag@juntadeandalucia.es

FREE ENTRANCE
Free guided visits by the Education Programme  of the Alhambra. Saturdays and Sundays at 10:30 and 12:30 (from 16th April to 22nd May) Group sizes NO LARGER than 15 people
SIGN UP: Corral de Carbón / 958 575 126 / alhambraeduca.pag@juntadeandalucia.es