Owen Jones and the Alhambra 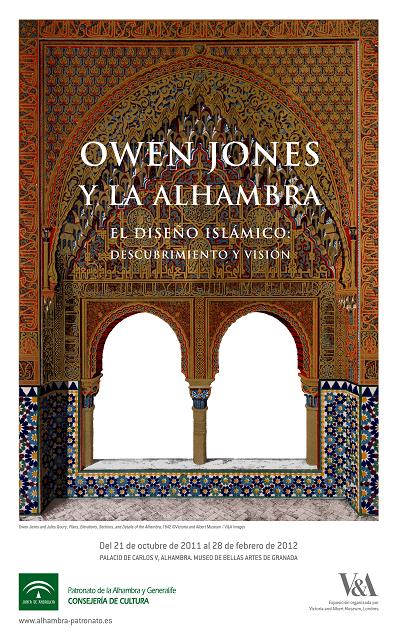 Patronato de la Alhambra y Generalife (PAG) and the Victoria and Albert Museum will honour English architect Owen Jones at an exhibition to be held in the Museum of Fine Arts, on the upper floor of the Palace of Carlos V, from 21 October until 28 February. The exhibition Owen Jones and the Alhambra. Islamic design: discovery and vision has been commissioned by University of Granada History of Architecture Professor, Juan Calatrava, in association with Mariam Rosser-Owen and Abraham Thomas, based on a V&A exhibit, and aims to contribute not only to the study of Jones himself, but also to the understanding of the important role played by the Alhambra in the work of many contemporary artists and architects.
Owen Jones (1809-1874) played a pivotal role in the great aesthetic debates of the 19th century triggered by the uncertainties surrounding the advent of the Machine Age. Active for nearly 50 years, he carried out architectural and interior decoration projects, designed industrial pieces and building elements, illustrated books, came up with new typefaces, and produced designs for miscellaneous products, including playing cards. He travelled to Spain, France, Italy and the Orient, wrote widely read books, taught classes and gave lectures, and enjoyed an enormous influence that continued long after his death.
One of his journeys took him and the French architect Jules Goury to Granada and the decisive encounter with the Alhambra. On his two visits to the monument (1834 and 1837), Jones saw the Alhambra through different eyes. It was no longer a place of fantasy or romantic legend, but a veritable treatise on architecture, a forgotten treasure trove that provided clues to something eagerly sought after by the architects of the day: the laws governing the exact science of ornament and colour. It was at the Alhambra that Jones developed his lifelong ambition to integrate the Islamic legacy with contemporary culture, a goal he pursued throughout his lengthy career as an architect and decorator.
Jones studied the monument in painstaking detail, producing drawings, plans, tracings and even plaster casts. The fruit of this work was Plans, Elevations, Sections and Details of the Alhambra, published in two volumes in 1842 and 1845. This seminal work on a new type of Orientalism turned the Alhambra into one of the central themes of architectural debate in the 19th century.
An unparalleled occasion to demonstrate this presented itself in 1851 with London’s Great Exhibition (the first World’s Fair) and the Crystal Palace. Jones received a number of commissions, including the interior decoration of the palace, where he painted the metal structures in the primary colours of the Alhambra (blue, red and yellow). But his greatest opportunity came in 1854, when he created a replica of the Court of the Lions and other parts of the Alhambra inside a second version of the Crystal Palace erected in Sydenham. In his explanatory leaflet The Alhambra Court, Jones reiterated what he believed to be the scientific laws governing the ornamental details of the Alhambra and gave an honest explanation of the differences between his replica and the original Court of the Lions. Until it was destroyed by a fire in 1936, the Alhambra Court at Sydenham was a source of knowledge about the Nasrid palace for millions of people.
In 1856 Jones took the next step: condensing his experience into a veritable treatise on decoration. His Grammar of Ornament attempted to summarise the scientific principles of design in a kind of “grammar” and became standard reading for at least three generations of architects and artists (including Le Corbusier, represented here with three drawings copied from Jones’s work).
Jones’s work and theories had enormous influence on his contemporaries. Countless objects and ornamental elements made by artists from different countries who benefited from his ground-breaking work serve to remind us that the impact of this figure can only be fully appreciated within a wider context—encompassing modern art, architecture and design—in which Jones established dialogues with figures such as Ruskin, William Morris, Henry Cole and Christopher Dresser. But Jones also left his mark on the Alhambra itself, where he became a key reference for the 19th-century restorers and for Rafael Contreras in particular.
Location: Monumental Complex of the Alhambra and Generalife.
Dates: From 21 October 2011 to 28 February 2012.
Opening hours: Monday through Thursday and Sunday 9:00 am – 6:00 pm. Friday and Saturday 9:00 am – 8:00 pm
Free guided tours for the general public
Date:
December 27 and 28, 2011
January 3 and 4, 2012
Opening hours: 5:00 – 6:00 pm
Information and reservations for guides tours: Corral del Carbón Information Office (Mariana Pineda St., 7 – Corral del Carbón Building) / 958 57 51 26 / alhambraeduca.pag@juntadeandalucia.es (Please state your name and telephone number)