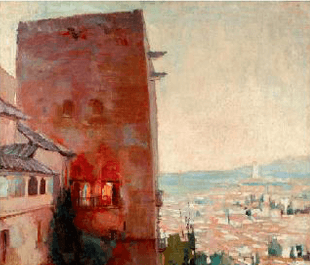 The Nasrid Sultanate of Granada which ran from the 13th to the 15th centuries left behind an art form exemplified in the Palaces of the Alhambra and Generalife, which had a profound impact on the first Romantic travellers from Britain and France who, from the first third of the 19th century, began to include Spain in what was known as the Grand Tour, a journey through the countries of Europe that were generally considered to be exotic and had a historic romantic past.

Granada and the Alhambra were a "gateway to the Orient" steeped in epic legends passed on by the Romantic writers in their pilgrimage through Spain. These included Gautier in his "Picturesque Journey", Viardot, Alexandre Dumas… and his poem "Granada " etc…

The Orientalist theme was a constant, crucial feature in painters such as Lewis, David Roberts, Alborch and Ford and the term “Alhambrismo” was coined to describe a genre that spawned hundreds of paintings across Europe. In “The Grammar of Ornament” Owen Jones highlighted the art of the Alhambra as the “Moresque Style”. This fascination for the exotic was also clear in the work of Eugene Delacroix, one of the French painters with most personality.

In Spain and more specifically in Andalusia from the 1840s onwards, painters from different schools turned their attention to the palaces and gardens of the Alhambra as a way of developing a more sensual, intimate style.

Alhambrismo also emerged as a genre in music. During his visit to Granada in 1919, one of the great artists of the 20th century, Henry Matisse, was awestruck at the sight of the rooms once inhabited by the Sultans.

Other avant-garde Spanish artists such as Manuel Ángeles Ortiz, Rodríguez Acosta and Scally also expressed themselves in an art form that combined spirituality, exoticism and modernity, and all agreed that beholding the Alhambra and painting it was akin to a “religious experience”.

Place:
Museum of the Alhambra, Palace of Charles V