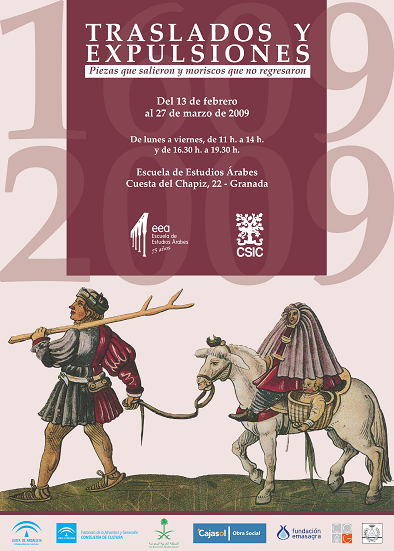 Movements and expulsions. Pieces that went out and Moriscos who did not return explains the historical event that supposed the expulsion of the Moriscos, through a collection of original architectural pieces of the Moorish Houses of the Chapiz and that were dispersed in different Spanish museums.

The exhibition composed among other pieces by windows of plaster, fountain of marble or small chest of wood, complements itself with informative panels that show the origin, the evolution and the destination of the Moorish, Muslim Hispanics of the 16th and 17th century that were forced to be baptized.

The exhibition is organized by the EEA, dependent institution of the High Council of Scientific Research (CSIC), the Consejería de Cultura de la Junta de Andalucía (Ministry of Culture of Andalusia), and the Board of the Alhambra and the Generalife. Furthermore collaborations of the Kingdom of Saudi Arabia, Cajasol’s Benefit society, the Emasagra Foundation, the Official College of Architects’ of Granada (COAG) and the University School of Technical Architecture of the University of Granada.
Place: School of Arabic Studies (EEA), Cuesta del Chapiz, 22. Granada.
Date: From the 13td of February to 27th of March 2009.