EMBROIDERED. Fabrics in the furnishings of the house 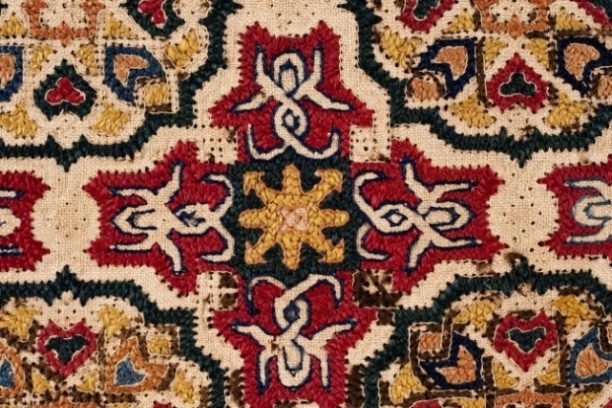 The samples of embroidery presented show us the quality of Nasrid fabrics in their technical finish. These pieces were generally used as part of the furnishings of the house in cushions, tablecloths, curtains, etc.
Decorative designs covered the whole surface generally with a looping pattern which in turn is filled with smaller motifs. The textile base was taffeta linen and the embroidery was done in practically untwisted coloured silk.
The tradition of embroidery from the 15th century on followed two different paths: one on the lberian peninsula evolving into a Christian decoration; and one which continues in North Africa with the same emigrant Nasrid craftsmen, who use the same materials, technique and decoration but with certain changes. 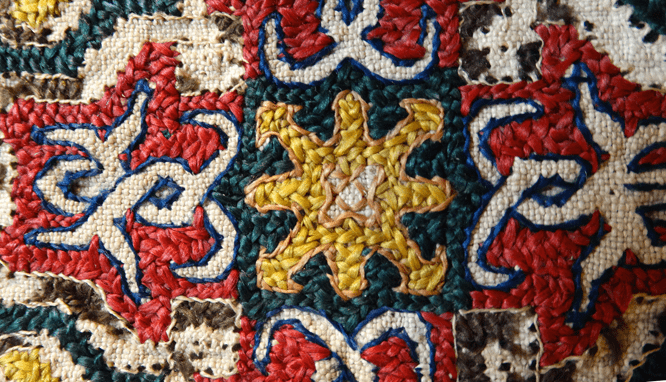 The interest of this piece is that it has retained one of its edges, which is trimmed with a hem stitched in natural coloured thread and with small closely spaced eyelets surrounded by yellow stitching, possibly for the fastening of the piece. This edge has two parallel lines of cord embroidered in golden yellow.
The pattern is prepared for embroidering, transferring it to the fabric with a line of the same natural undyed colour in bead stitch. The embroidery is only seen on the front and on the back you can see the arbitrary stitching done to fill each motif with vivid colours.
The filling is braided herringbone with a cross stitch overlapping and extending on either side. It is sometimes deformed by the irregularity of the space to be covered. The embroidery follows the rhythms of cable stitch, i.e. every crossover alternates with the next, one over the other, as done in carpentry with a fastening as well as decorative purpose, and it is passed to any form of geometrical representation of the Nasrid loop, as in this case.
Originally, the underlying fabric was virtually invisible on this piece as it was completely covered with embroidery. Today, it has lost most of the spaces embroidered in brown-grey colour, perhaps due to the dying process, which has made them less durable and caused them to virtually disappear. The loss of this colour in the embroidery, on the other hand, has changed the resultant effect of the piece, as it was the colour that filled the strip of the whole decorative design outlined by the thin line of natural white bead stitch similar to the background, which produced in a very delicate way a dark coloured geometric design with thin ivory coloured edges leaving spaces that were filled with the vivid colors that survive today. 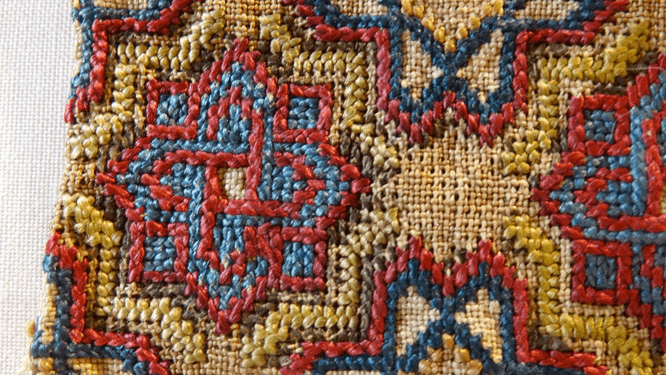 It has a loop framework with stars and crosspieces. It is delineated by a golden yellow silk ribbon framed by another in brown. The interior design is filled with 90º stars formed by a continuous intertwined ribbon, and the crosspiece, having a square between the stars, presents another star shape outlined in red line and on the inside, in blue, a central square and the peaks of the arms of the crosspiece
This embroidery, as in those preserved from the classic Nasrid period, uses a brown silk thread, which because of its dye deteriorates and disappears, only leaving its testimony in some small samples. 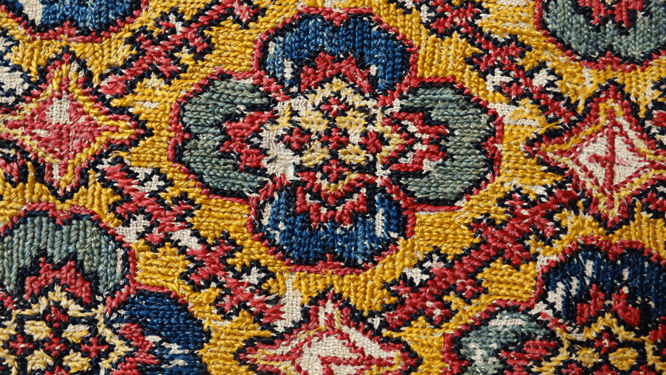 A rectangular pattern with two triangular shapes at the ends to form a hexagon has been preserved. It may have been part of a larger unembroidered piece showing  these highlighted forms. It has a rectangular space with a diagonal grid pattern and inside each square, with a quadrifolia and triangular ends, it shows a base border and black filling.
Other pieces very similar to this one are preserved at the Lázaro Galdiano Museum.
Such fabrics are the direct heirs of Nasrid embroidery, which quite possibly soon changed on Christian grounds.
In the city of Chefchaouen the Nasrid embroidery tradition continues, being one of the destinations in the expulsion of the Nasrid sultanate which began in the 15th century (A. López). Thanks to these workshops we can see the evolution of the decoration of the delicate and complex Nasrid embroideries which continue to be used primarily for household linen.