The Count of Romanones collection in the Alhambra Library 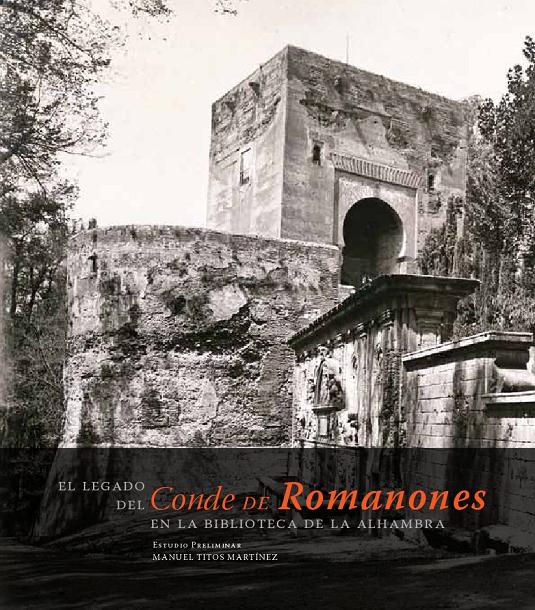 As with many Spanish cultural institutions, the Alhambra Library was born in the troubled 19th century, when the doctrine of public ownership of ecclesiastical, noble and crown properties was consolidated, leading to the public use of many heritage elements. This period of social and political agitation saw the emergence of many of the main agents in the creation of the bibliographical fond known as the Romanones collection, but actually put together by the Malagueñan Marquises of Casa-Loring and completed by the Vice-Count of Irueste and probably his brother, the Count of Romanones, who donated the collection to the Alhambra in 1909.
Jorge Loring and his wife Amalia Heredia felt a special link with the Alhambra, which was what motivated them to build up their library. Renting the rooms above the Gate of Justice as their residence and spending long periods of time there, they brought with them a collection of books on Alhambra, travel and Moorish themes, to which they added over the years.
After suffering a rail accident in France, their son-in-law, the Vice Count of Irueste, also moved to the Gate of Justice apartments to convalesce. When he died in 1901, he bequeathed his books to his brother the Count of Romanones, who had them moved to Cartagena before eventually bestowing them definitively to the Alhambra.
The story is marvellously recounted by Manuel Titos, author of the preliminary study and once more collaborating with PAG in promoting our cultural heritage. I emphasise it here, because it is rich in aspects that, though well known, continue to hold our interest. The first is the affective bond felt by all who live the Alhambra, “the experienced Alhambra”, as Pedro Galera calls it, which marks the passage of their lives. These places not only become impregnated by the memories of those who live in them, but sometimes, as on this occasion, they become the actual receptacles of their physical memories, as with the books which became a part of the Gate of Justice, at least until 1915, when they were translated from the Alhambra Library to the now gone mezzanine floor of the Palace of Carlos V.
The other aspect is that of a private collection which, through donation or bequest, over time becomes the seed of a great cultural institution, as with the Romanones Collection and other Loring family legacies in Malaga, such as the Concepción estate and the outstanding collection of classical sculpture partly preserved in the Museum of Malaga.
This collection expresses our gratitude towards those visionaries who understood the universal cultural value of their property, so that it can now be enjoyed by everybody. I would also like to thank the specialists of the Alhambra Library for their professionalism and dedication, particularly on this occasion María del Mar Gil and María del Mar Melgarejo, who scrutinised and valued the collection.
Finally, I would like to call the attention of the researchers in our midst, to whom the cataloguing project, beginning with Washington Irving in the Alhambra Library, is particularly dedicated. Thanks to their work, the Alhambra now offers a reliable point of reference for studies on the monument and the fascinating world of stories collected and written down by the Romantic travellers, culminating decades later in Orientalism and the glorification of the remains of a Moorish past.