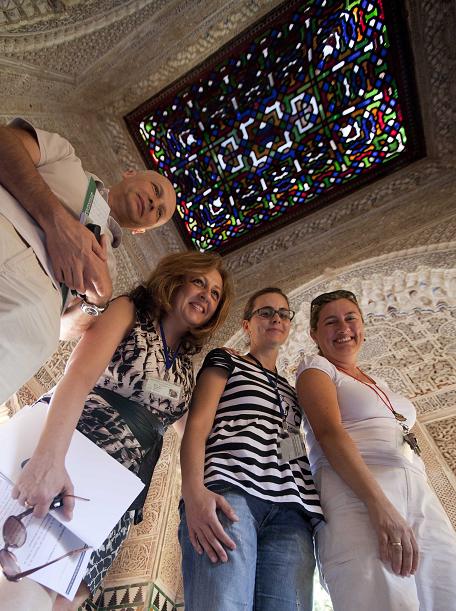 Restoration works on the unique piece have lasted one year

This morning María del Mar Villafranca, general director of the Patronato de la Alhambra y Generalife (PAG), presented the results of the restoration of the wooden and glass roof lantern of the Patronato de la Alhambra y Generalife (PAG), a small belvedere to the north of the Hall of the Two Sisters and belonging to the Palace of the Lions (built by Muhammad V from 1370 to 1380). The PAG Carpentry Restoration Service was commissioned to undertake the works on the skylight, a unique rectangular pinewood structure, shaped like an upturned cradle, which lets light into the mirador through a series of coloured glass panes.
During the works, which had a budget of €74,424.81, several pathologies were discovered, including a thick coating of dirt, built up due to the accumulation of dust and organic material from the outside, and the deformation, breakage and loss of wooden elements due to the aggression of the elements, which has also resulted in the rusting of metal elements and the cracking and fading of panes.
In addition to the material and structural consolidation of the skylight, the restoration works have also made it possible to date peinazos (wooden strips supporting the glass panes) and planking, reconstruct the material history of the mirador through textual and graphic documentary evidence; define the phases in the construction and assembly of the skylight; identify the types of peinazos used (59 different types have been identified) and how they were assembled and put together. Additionally, a series of drawings, mainly preparatory carving sketches for carving, were found behind the palmettes and pine cones of the frieze.
Another of the main lines of work was to determine the technique used to manufacture the original panes and to establish their composition and the type of colouring used, comparing them with original glass pieces held in the Museum of the Alhambra. This is the first time that glass of these characteristics has been analysed both quantitatively and qualitatively – small fragments of glass found show that the original colours used were clear, violet, ochre, blue and green.
Modern materials, including fibreglass, were introduced to reinforce the wooden joints and to add a certain weight to the structure, while a reversible peg system is used to hold the panes in place without adhering them to the frame.
Of enormous complexity and technical quality, the Lindaraja ceiling, considered by experts an essential element in conceptualising the windows of the noble parts of the Alhambra, has undergone restoration works on other occasions, to reinforce the peinazos and to replace missing or broken panes.
Works on the structure, which have taken a full year, focussed on facilitating the future maintenance of the skylight. Drop-down platforms were installed, with lifelines to ensure workers’ safety, along with glass windows that can be opened from the outside, allowing access to the tower for preservation works. The mirador has also been fitted with a special state-of-the-art LED lighting system, to enhance the richness and colour of the skylight after the restoration works.