“VISIONS” of the Alhambra on display in Berlin 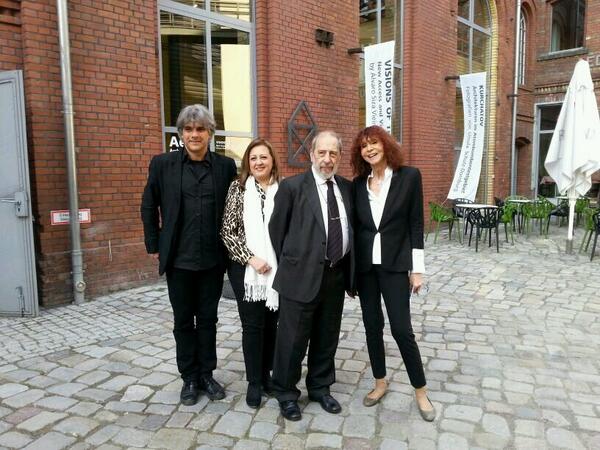 With an exhibition of the project for the Atrium of the Alhambra, designed by the architects, Alvaro Siza and Juan Domingo Santos, winners of the International Ideas Competition for the design of the new visitors’ entrance...

“Visions of the Alhambra” is the title of the exhibition that Aedes, the International Forum on Architecture and Urban Design Forum in Berlin, is devoting to the Portuguese architect Álvaro Siza Vieira (Oporto, 1933). This exhibition, which is being organized in collaboration with the Council of the Alhambra and Generalife and was inaugurated today, presents the New Gate project, devised by the tandem formed by Siza and the Granada architect Juan Domingo Santos (Granada, 1961). The project won the International Ideas Competition held by the Alhambra in 2010 for a New Entrance Pavilion and Visitor Reception and Information Centre.
Numerous personalities from the world of architecture, culture and politics in Berlin attended the inauguration of the exhibition by the Director of the Council of the Alhambra and Generalife, María del Mar Villafranca, and the project’s architects Álvaro Siza and Juan Domingo Santos.
Villafranca said that she was “delighted” that such a well-known Forum as Aedes had decided to showcase the project: “the Atrium of the Alhambra is a great cultural project in itself. This new reception area presents us with the challenge of sharing the past, present and future of this privileged space with those who come to visit it, so as to prepare them to enjoy our heritage in an organized way, and offer them the necessary information to help them understand it better from the perspective of an advanced architectural concept”.
After its stay in Berlin, the exhibition will be travelling to the Vitra Design Museum in Basle from 13th July to 31st August, before moving on again to the Alhambra and Generalife Group of Monuments, in spring 2015. In June next year, the exhibition is scheduled to arrive at the Aga Khan Museum in Toronto.
‘Visions of the Alhambra/Álvaro Siza’ will have many of the architect’s sketches for the Atrium of the Alhambra project. Siza, who won the prestigious Pritzker prize in 1992 considered the Nobel Prize for Architecture, himself described it as “the.. (most important).. project of my life. I have given it my all. Each new project is a challenge, but this one is of mythical proportions”. The exhibition will also have scale models, floor-plans and representations in 3D, which will familiarize the Berlin public with the New Gate project.
The exhibition also displays various pieces showing the “close links” between the architects and the Alhambra. Álvaro Siza first visited the palace with his parents when he was a boy: “I was fascinated. I have since revisted the Monument several times, sometimes in the company of people who know it very well, and this has enabled me to immerse myself in its history”.
The New Gate project will involve the reorganization of various different entrances to the Alhambra, a job which the two architects believe “will be complex”. Their top priorities will be insertion into the landscape and respect for the territory and the archaeology. Alongside this exhibition, Aedes also plans to hold workshops and debates in which they will be analysing the importance of heritage in contemporary cities in order to open new lines of dialogue.
Over the years this gallery has staged numerous exhibitions about some of the greats of architecture including several Pritzker Prize winners, internationally renowned studios and famous architects such as MVRDV, Tadao Ando, Frank O. Gerhy, Daniel Libeskind, David Chipperfield, Peter Zumthor, Zaha Hadid, Richard Rogers, Richard Meier, Norman Foster, Morphosis, Peter Eisenman, Peter Cook, Alvaro Siza, Gustav Peichl and OMA.
The Alhambra and Generalife were declared a World Heritage Site by UNESCO in 1984. The Council of the Alhambra and Generalife is the body responsible for the protection, administration and conservation of the Monument, and all its buildings, woods, gardens, groves and other land, along with the drafting and execution of the plans that must be implemented in its conservation, restoration, excavations and in general any plans that may affect it and may be executed within its boundaries and its surrounding area.
The Council of the Alhambra and Generalife is in charge of the protection and conservation of this important exceptional legacy, approaching this task from a modern conception of a custodian of cultural assets that goes beyond the purely artistic and cultural aspects to a wider vision that also encompasses the preservation of the surrounding area and landscape, as is vital given the Alhambra’s urban location within the Historical and Artistic Centre of Granada.