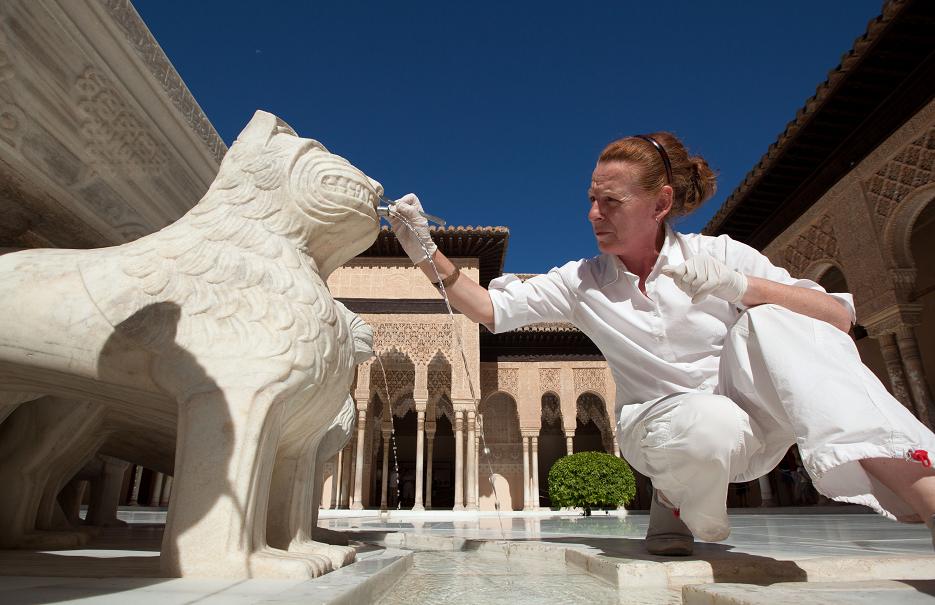 The restoration of the set of sculptures of the Fountain of the Lions and its hydraulic circuit has constituted the nucleus of the different talks in the third session of the course organized by the Patronato de la Alhambra y Generalife and the Mediterranean  Centre of Granada University (UGR), The restoration of the Fountain of the Lions of the Alhambra: criteria, processes and methodology.  This is being held throughout this week in the Palace of Charles V.  The restorer Carmen Tienza, who is responsible for the restoration of the set of sculptures of The Lions, has highlighted in her talk the methodology carried out during the whole process. It has meant the reconciliation of purely traditional work and a series of very innovative skills and scientific advances which have made it possible to achieve the desired results and have proved that tradition and innovation are not incompatible.

Tienza has commented on the fact that during the whole process a protocol of performance has been followed, in which research and prior analysis have provided the necessary data so that the group of experts forming the technical commission could take the most relevant decisions in agreement. The Department of Conservation of the Patronato de la Alhambra y Generalife has directed the work of  Carmen Tienza’s team, consisting of eight people, and which has required more than three years of work dedicated to cleaning, disinfection, consolidation and reconstitution of unknown factors to achieve the present image of the twelve figures of the Fountain of the Lions.

On the other hand, Beatriz Martín Peinado, also a restorer, has explained the process of restoration of the basin of the fountain. Due to the dimensions of the basin, 2.52 metres, it was impossible to transfer it anywhere else, therefore all the cleaning and restoration work was carried out in situ. According to the restorer, it has been possible to maintain the good condition of the basin, in spite of the weather and climatic changes, thanks to the fact that it was sculpted from one single block of White marble from Macael, the same as the twelve figures of the lions of the fountain.

Finally the architects Pedro Salmerón and Diego Garzón, together with the industrial engineer Patricio Bautista have closed the session giving details of the whole process of restoration of the hydraulic circuit of the Courtyard of the Lions.

During today’s session, the hundred participants attending the course have showed great interest in the subjects dealt with in the different talks in the course The restoration of the Fountain of the Lions of the Alhambra: criteria, processes y methodology. This is directed by María del Mar Villafranca, Director of the Monument, and by the architect Pedro Salmerón, who has led the restoration of the hydraulic circuit of the courtyard.

Director of the Monument