The Lions return to the Nasrid Palaces of the Alhambra 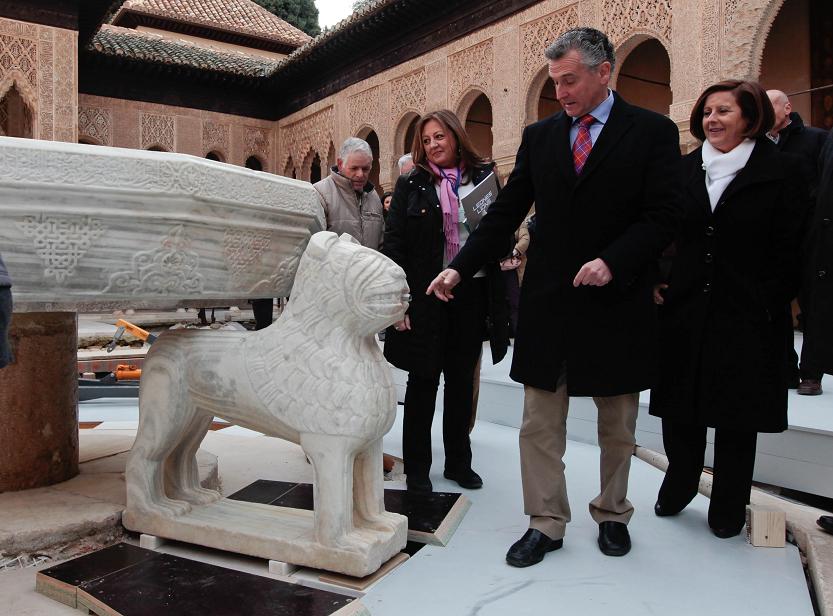 Today, the lions return to the Alhambra. Paulino Plata, Government of Andalusia minister for Culture, today oversaw the first step in the process of returning the Nasrid sculptures to their historical location in the Court of the Lions, after being removed from the site in 2007 for a complex restoration process at the workshops of Patronato de la Alhambra y el Generalife (PAG). The final phase of the works on the Court of the Lions includes the installation of the hydraulic circuit and the laying of new flooring, making it possible to the public to walk in the central part of the Court in the spring of 2012.
According to Plata, the Alhambra is “an international example of heritage management”, and great care and effort are needed to maintain the “balance between protection of the site and the high number of visits”. In the first 10 months of 2011 the site had received 2,051,834 visits, up 7.21% on 2010. Plata also mentioned that the Alhambra employs 5845 people, and that visitors leave some €356 million with the site each year. He added that the restoration of the Court of the Lions and its sculptures cost €2,160,000.
Lion No. 8 was the first to leave the Crypt of the Palace of Carlos V, where it had been on show to the public since it and the other 11 lions were restored, to great expectation from visitors, authorities and media, gathered to witness a unique event, which was also streamed live on screens installed in the Palace of Carlos V, the Generalife Entrance Pavilion and on the website Palace of Carlos V, in collaboration with Granada Science Park. Plata classified the transfer of Lion No. 8 as “historic” and added that “the intervention in the heart of the Alhambra will mark the principles of preventive conservation in the Alhambra, through an innovative model of heritage management”.
In this regard, and in order to guarantee the perfect state of conservation of the Lions and the fountain bowl, PAG will have a “highly specialised, state-of-the-art team”, said PAG general director María del Mar Villafranca, who also said that the measures to be put into place will include the installation of instruments to record and analyse conditions in the Court itself, a weather station to evaluate the behaviour of the elements in the micro-climate of the Court of the Lions, and an advanced security system.
The restoration of the 12 lions, performed by the Alhambra conservation service, the Spanish Institute for Cultural Heritage and the Andalusian Institute for Historical Heritage, in conjunction with the Seville Higher School of Engineers and the University of Granada Department of IT Systems and Languages, included the removal of a thick coating of lime, halting the invasion of biological elements, the repair of damages of several kinds and the removal of metallic elements and harmful adherences, such as cement. It has also thrown up very valuable information with regard to their artistic, historic and symbolic interpretation.
The intervention, guided by the principle of authenticity, has revealed the intricate and detailed process followed in the making of the sculptures. Although the lions may look alike, a multitude of differentiating features has now come to light. Each block of marble was carefully chosen so that its natural grain would best highlight the shape and features of each figure, including differences in their coats, marked jaws with sharp fangs, prominent snouts and almond-shaped eyes. The delicacy of the details, such as the features of their faces and the clearly-distinguished phalanxes of their paws, are a harmonious element of the naturalist decoration of the palace.
The lions can now be grouped into three groups, each consisting of two pairs, sharing share similarities in their snouts, coats, attitude and tail. Their analysis has contributed to the understanding needed to restore features that had been lost from their faces, as well as their ears, some of which have been restored following the shape they had been given when they last underwent restoration, while those which had not been completely lost, were protected with a finishing that respects their original features.