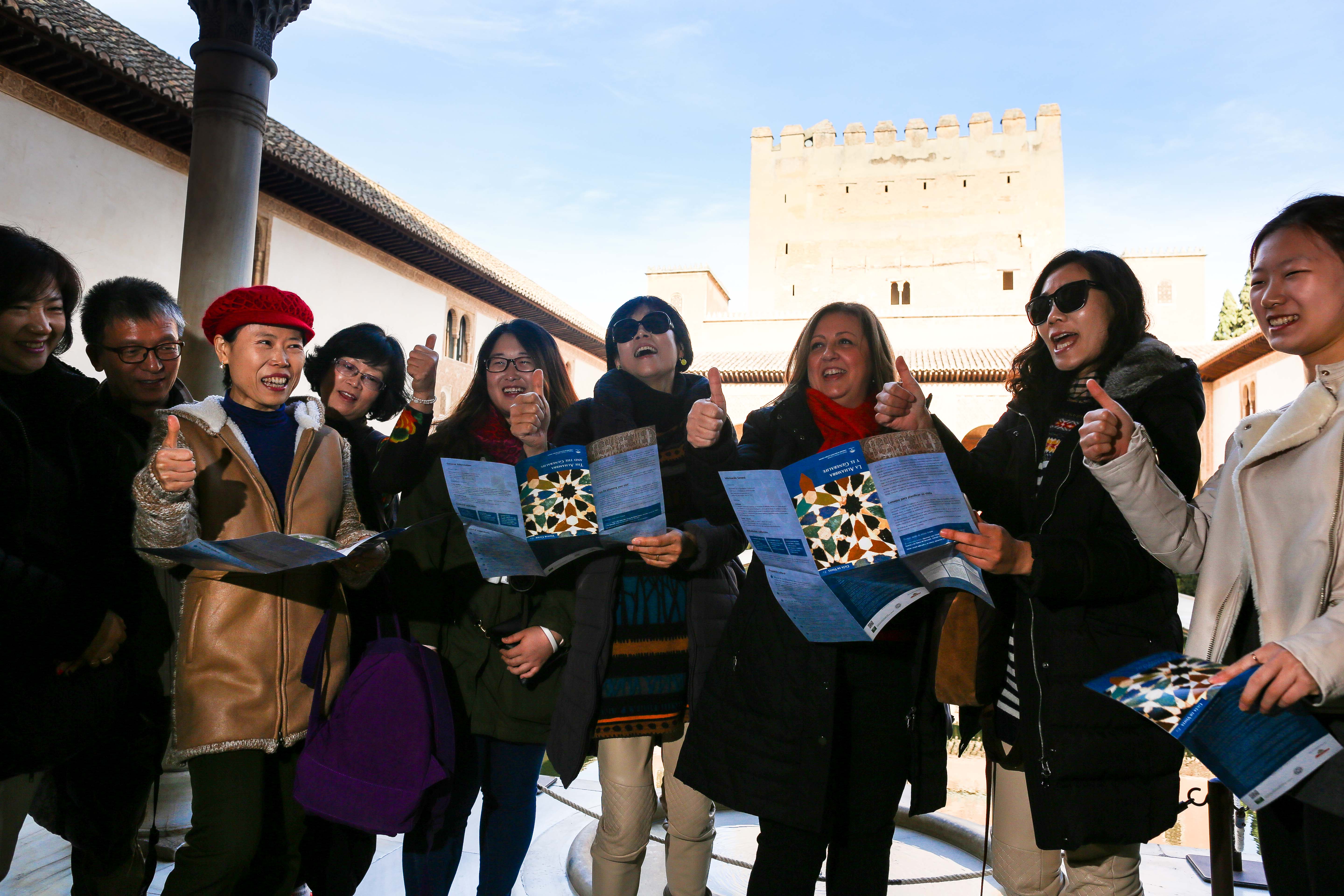 The Alhambra and Generalife Group of Monuments has once again broken its own record of visitors, confirming its position as the most visited monument in Spain with a total of 2,402,473 visitors.

The Alhambra and Generalife Group of Monuments has once again broken its own record of visitors, confirming its position as the most visited monument in Spain with a total of 2,402,473 visitors. These are “excellent results” showing a rise of 3.78% on 2013, with 87,456 more people than last year choosing the Alhambra as a cultural destination.

These results make 2014 “the best year for tourism in the history of the Alhambra” according to María del Mar Villafranca Jiménez, the Director of the Council of the Alhambra and Generalife, in the presentation of the Annual Report on Education, Culture and Tourism at the Monument. She highlighted the “substantial” growth in educational programmes, in which 93,273 schoolchildren took part in some of the various activities organized for them, 4,646 more than in 2013.

According to the data provided by the Alhambra’s Sustainability Laboratory, the most notable increase was in January and February, which normally have fewer visitors, with percentage rises of 20.08% and 9.68% respectively. The day with the fewest visitors was 11th December in which 2,212 toured the monument and the day with the most was the 1st May with 9,329. As regards the monthly results, May broke the record again for the highest number of visitors with 260,727, followed by August, April, September and October.

In her speech, the Director stressed that the Alhambra remains the most popular tourist attraction in Granada and in Andalusia, and is the most visited monument in Spain.

The study also confirms the growth in cultural consumption. as manifested in the increasing popularity of the museum, exhibition and cultural events and activities offered by the Monument. 202,111 people visited the Museum of the Alhambra and 151,636 enjoyed the Granada Fine Arts Museum on the upper floor of the Palace of Charles V. A further 299,554 people attended the temporary exhibitions. The events staged as part of the International Festival of Music and Dance (22,123), the Lorca and Granada flamenco show in the Generalife Gardens (30,000) and other cultural activities (5,588) also proved popular. When all these figures are added to the number of tourists on the general visit to the Alhambra (2.402.473), we reach a grand total of 3,113,485 visitors to the Group of Monuments in 2014.

The Director also noted that the growth in cultural activities has above all been due to the high impact exhibitions, which have “reinforced” the attraction of the Monument. These include ‘the Art and Cultures of Al-Andalus – The power of the Alhambra’ (82,391), ‘Variations on the Japanese Garden’ (56,392), ‘José Guerrero – The presence of black’ (20,462), ‘Universo Morente’ (18,422), ‘Ángel Barrios – Creativity in the Alhambra’ (60,899), ‘Weapons and Equipment in the Nasrid Defensive System’ (27,002) and ‘Inno-vating tradition’ (5,944) among others, which together received a total of 299,554 visitors in 2014, an average of 825 a day. It is also interesting to note the “great interest” these exhibitions aroused amongst local people, who represented 25.13% of the total.

As regards the most popular type of visit, the day visit came first with 1,984,462 people, up 0.73% compared with 2013; this was followed by the visit to the Gardens (210,096 visitors); the night visit to the Nasrid Palaces (65,297), the Tourism Pass (36,560), Alhambra Experiences (27,473) and combined visits with other institutions (14,843). However, although there have been increases in all the different kinds of visit compared to 2013, Villafranca highlighted the “spectacular” increase in Combined Visits, Alhambra Special, Gardens-night, Alhambra Experiences and Gardens, and of the Tourism Pass “which has returned to the levels seen prior to the crisis”.

As regards overnight stays, the results of the study by the Sustainability Laboratory show that 1,770,260 visitors to the Alhambra stayed in a hotel in the city in 2014, a rise of 33,418 on 2013 (1.95%). In terms of types of stay, individual visitors rose by 2%, while visitors in groups fell by 4.8%. As regards the type of accommodation, the preferred option was Hostel/B&B to the detriment of 1, 2 and 3-star hotels, and staying in private accommodation with friends and family. Organized groups of tourists tend to use 4 and 5-star hotels.

Visitors to the Alhambra also visited other places in Granada such as the old city centre and the Albaicín, followed by the Cathedral and Sacromonte.

As regards the country of origin of visitors to the Alhambra in 2014, the largest group were from the European Union (43%), above all from France and Germany, followed by the USA (7.40%), the United Kingdom (5.90%) and Japan (3.32%). Growth in emerging markets (Latin America, North America and Asia) has consolidated and now represents 25% of group tourism and 21% of individual. However domestic tourism from Spain with 766,869 visitors (groups and individuals) (31.92%) is the main source of customers for the Alhambra, of whom 34,920 were resident in Granada, 122,484 in other provinces of Andalusia and 609,466 were from the rest of Spain.

The report on the tourism, educational and cultural activities of the Alhambra and Generalife Group of Monuments has a special section on visitor profile. The majority of tourists who choose to visit the Alhambra are between 26 and 50 years old, are university graduates with qualified jobs and leave the Monument with a high or very high degree of satisfaction, valuing above all the good state of conservation of the buildings, the maintenance of the gardens and the fact that it is clean and tidy.

The report also confirmed the consolidation of the booking system, as 70% of visitors to the Alhambra now plan their trip in advance and buy their ticket before coming.

The use of new technologies has also had a positive effect on people’s knowledge of the Monument. In 2014, the Council of the Alhambra’s website (www.alhambra-patronato.es) received 1,245,394 visits, up 39% on 2013, with an average of 8 minutes per consultation and over 4,736,000 page visits, up 27% on 2013. With regard to the profile of the visitors to the Alhambra website, most are between 35 and 44 years old, mainly women, with university education and qualified jobs.

According to a survey by Kantar Media for the Council of the Alhambra and Generalife, the Alhambra has generated a total of 26,558 news items, showing a notable increase in all media. This occurred above all in Internet with 20,530 references and in printed media with 5,496 impacts, of which 958 were headlines. There were also 303 radio news items, of which 104 were broadcast on nationwide channels, and 203 television reports, 67 of which were nationwide. In terms of audience the impact in 2014 reached 2,867 million people, which at today’s advertising prices would have cost almost 30 million euros.