The Alhambra opens its doors to Granada 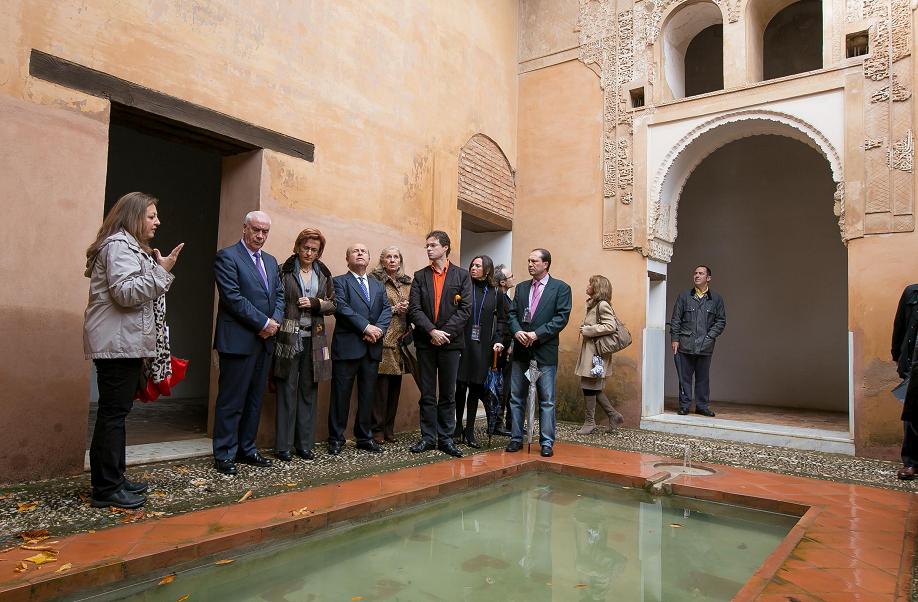 Thousands of Granada citizens enjoy the Open Day, in spite of the the rain that fell all day

The Alhambra opens its doors to Granada. More than 10,000 Granada citizens of all ages have taken part this weekend in the Open Day Our Alhambra. This was one of the activities that the Patronato of the Monument has organized to join in with the official programming on the occasion of the 40th anniversary of the World Heritage Convention of the UNESCO.  This year its theme is orientated towards the local community, to foster greater awareness of the need for “protecting and caring for” the Sites registered on the List, which in the case of the Alhambra and the Generalife was in 1984.
The Minister for Culture and Sport of the Regional Government, Luciano Alonso, together with the Mayor of Granada, José Torres Hurtado, and the director-general of the Patronato de la Alhambra y Generalife, María del Mar Villafranca, welcomed the citizens of Granada, the early risers, who in spite of the rain wanted to enjoy this festive day, with numerous special activities:  “Two days to take pleasure in our nearest Heritage: the Alhambra and the Generalife, that for the first time is opening exclusively for them”.
On his route around the Monument, the Minister showed how satisfied he was about the favourable acceptance of this initiative by the Granada citizens. The tickets that were available sold out in just a few hours, and he pointed out the importance of caring for and protecting a “legacy like the Alhambra to pass it down to future generations”.  He was also able to listen to the quartet of medieval music, La Dancerie, which throughout the morning delighted the visitors with different renaissance music in the Palace of Charles V. Afterwards he made a short tour of the Royal Baths of the Mosque and the Nasrid House, ending with a visit to the Gate of the Seven Floors. He was accompanied by a group of Granada citizens with whom he shared a mutual fascination for this Monument.
During this open day, hundreds of people have taken part in different routes through the Castle, the Water in the Alhambra, the Silla del Moro (Castle of St. Elena) and the Gardens and Orchards. Others have chosen to get to know some pieces from the Museum of the Alhambra, accompanied by Senior Citizen volunteers, or have been able to access areas which are normally closed to the public, such as the Gunpowder Tower, the Tower of the Princesses, the Gate of the Seven Floors; the Nasrid House, the Baths of the Mosque in the Royal Street and the Viewpoint in the Southern Pavilion of the Generalife.
The youngsters of the family have also enjoyed themselves with story-telling in the Alhambra Bookshop in the Palace of Charles V, and they have taken an amusing illustrated souvenir of some of the photographic places prepared for this occasion. Some of these, although they were born in Granada, were visiting the Monument for the first time. The Guest Book was also available on Open Day, and it has received thousands of comments from Granada citizens who have wished to leave evidence of their experience.
The 40th Convention of World Heritage is being held this year with the theme of World Heritage and sustainable development: the role of local communities and it focuses on the path and the challenges facing the World Heritage list to accommodate new types of heritage (industrial, cultural landscapes, underwater heritage, and serial nominations). In particular it focuses on the essential role of local communities regarding the conservation of inscribed property.
As from the Convention of World Heritage in 1972 the regulations for the protection of World Heritage sites were established, by means of mechanisms such as the inclusion by Member States of sites and monuments on the World Heritage list. At present Italy and Spain head the ranking of countries with the greatest number of registered Sites.  All the activities programmed by Patronato de la Alhambra y Generalife have been approved and supported by the World Heritage Centre, and therefore they carry the compulsory logo that was designed for the celebration of the 40th anniversary.
More information
Video made by Patronato de la Alhambra y Generalife to commemorate the 40th anniversary of the Convention of World Heritage of the UNESCO
Photo Gallery of the Open Day Our Alhambra

Photo Gallery of the Open Day Our Alhambra (Pdf. 874 KB)