Paving work begins in the Court of the Lions 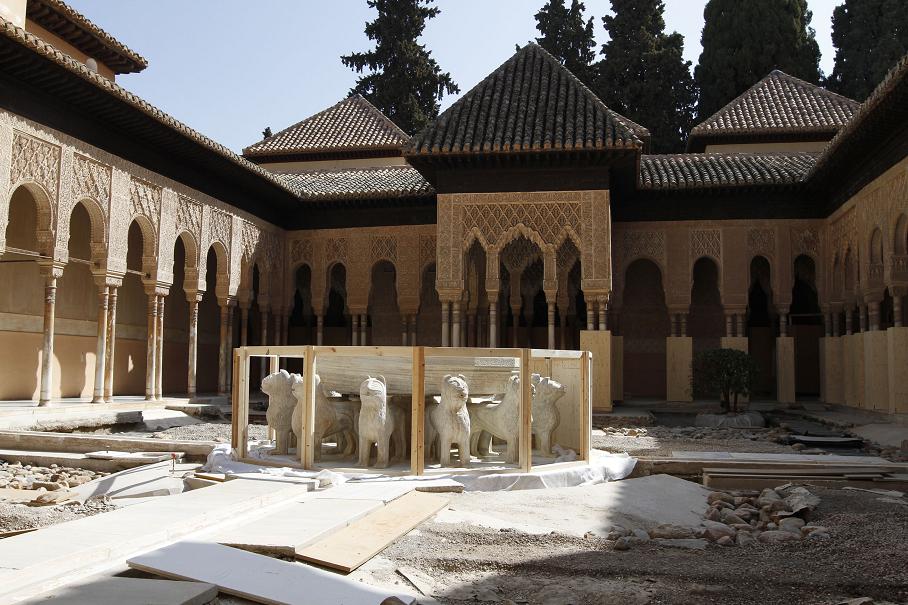 This Monday, the fountain and sculptures will be covered with a tailor-made protection system

This Monday, the Patronato de la Alhambra y Generalife (PAG) Conservation Service began preliminary work on the paving of the Court of the Lions. Early in the morning, the sculptures and fountain were covered with a specially-designed protection system, to guarantee their wellbeing for the duration of the works, estimated at two months. Also in preparation for the works, the water supply to the fountain and lions was cut off.

The work will be undertaken by Construcciones Otero, using marble from the Macael quarries in Almeria.

The makeover aims to restore the Court of the Lions to its original image, as conceived by Sultan Muhammad V in the 14th century and described by early travellers, such as Hieronymous Münzer, as being paved in white marble.

An exhaustive study of historical documents from several national archives has revealed that the floor was paved in white marble in the late 15th century. Accordingly, the makeover will restore the courtyard to its original image, in addition to better preserving the hydraulic system.

To guarantee the optimum conservation of the fountain and the lions, Patronato de la Alhambra y Generalife will use a highly specialised team, equipped with cutting-edge technology. Measures to be put into place will include the installation of instruments to record and analyse conditions in the Court of the Lions, a weather station to track the behaviour of the elements in the micro-climate in the Court, and an advanced security system.

At the time of Muslim rule in Granada, two architectural styles dominated in Spain – the Gothic style in Castille and the Arabic-Andalusian style in Muslim Spain.  It was at this time when Macael marble reached the height of its splendour, being used in the dominant architectural style as a symbol of an entire culture. And it was also during this period when the Alhambra and the Generalife were built, along with many other fountains and palaces throughout Andalusia. When Granada was conquered by the Catholic Monarchs, demand for marble soared for use in the multiple churches, cathedrals, palaces, villas and public and private works carried out in the 16th and 17th centuries.