Paulino Plata visits Cosentino quarry in Macael, supplier of the marble for the Alhambra’s Court of the Lions 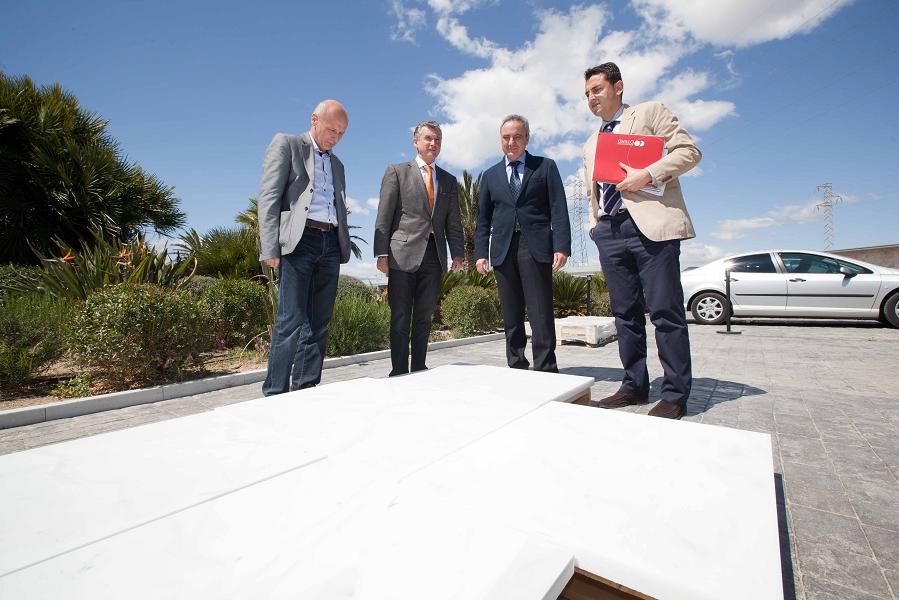 Acting regional minister for Culture Paulino Plata visited the Cosentino marble quarry in Macael, supplier of the marble used to be paved the Alhambra’s Court of the Lions

This morning, acting regional minister for Culture Paulino Plata visited the Cosentino marble quarry in Macael, supplier of the marble used to be paved the Alhambra’s Court of the Lions. The slabs of white marble follow mediaeval tradition and the line of other replacements previously carried out at the Nasrid site. Now that the lions, the fountain and the water system have been restored, the paving of the floor in white marble completes the rehabilitation of the Alhambra’s best-known courtyard. Plata underlined the importance of commissioning the marble from “an Andalusian company committed to our historical heritage”, and one which has also “recently donated 1000 square metres of marble to Lorca’s church of San Mateo, damaged by the 2011 earthquake”, and explained that, once the floor has been laid, “visitors will be able to walk right up to the fountain, to see it close up and appreciate the detail of the restoration works” – since the 1990’s, visitors could only see the courtyard from the gallery.

Restoration works began several weeks ago, when the fountain was covered and the water supply cut off. The works will be supported by cutting-edge technology, including instruments to record and analyse conditions in the Court of the Lions, a weather station to track the behaviour of the elements in the micro-climate in the Court, and an advanced security system. The paving is being laid by Construcciones Otero and is slated for completion in early June.

The makeover aims to restore the Court of the Lions to its original image, as conceived by Sultan Muhammad V in the 14th century and described by early travellers, such as Hieronymous Münzer, as being paved in white marble.

“Obviously, as we are dealing with an internationally-renowned monument, the works are adhering closely to historical, archaeological and conservation criteria”, explained the minister. An exhaustive study of historical documents from several national archives has revealed that the floor was paved in white marble in the late 15th century. Accordingly, the makeover will restore the courtyard to its original image, in addition to better preserving the hydraulic system.

At the time of Muslim rule in Granada, two architectural styles dominated in Spain – the Gothic style in Castille and the Arabic-Andalusian style in Muslim Spain.  It was at this time when Macael marble reached the height of its splendour, being used in the dominant architectural style as a symbol of an entire culture. And it was also during this period when the Alhambra and the Generalife were built, along with many other fountains and palaces throughout Andalusia. When Granada was conquered by the Catholic Monarchs, demand for marble soared for use in the multiple churches, cathedrals, palaces, villas and public and private works carried out in the 16th and 17th centuries.