Griñán visits restoration works at Court of the Lions, to be reopened to the public in the spring 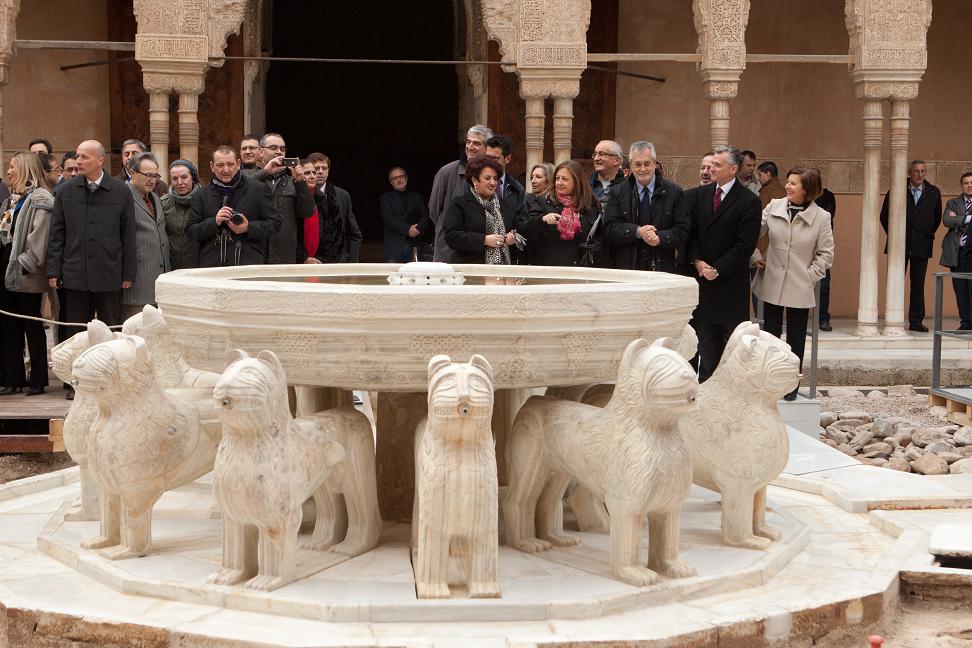 Andalusian prime minister José Antonio Griñán has visited test runs carried out on the water circuit at the Alhambra’s Court of the Lions. The intervention will allow the fountain and the lions watching over it to pour forth their water on the Hill of Sabika again.
The test runs are the final stage in the restoration works of this splendid work of art, originally built by Muhammad V in the second half of the 14th century. The final phase of the intervention of the courtyard will include the laying of new flooring, making it possible to the public to walk in the central part of the Court in the spring.
The restoration of the 12 lions included the removal of a thick coating of lime, halting the invasion of biological elements, the repair of damages of several kinds and the removal of metallic elements and harmful adherences, such as cement. It has also thrown up very valuable information with regard to the artistic, historic and symbolic interpretation of the Nasrid site.
The intervention, supervised by Patronato de la Alhambra y Generalife, was performed by a multidisciplinary team made up by technicians from the PAG Conservation Service, the Spanish Institute for Cultural Heritage and the Andalusian Institute for Historical Heritage, in conjunction with the Seville Higher School of Engineers, the University of Granada Department of IT Systems and Languages and the team of architect Pedro Salmerón.
The intervention, guided by the principle of authenticity, has revealed the intricate and detailed process followed in the making of these works of art, sculpted in white Macael marble. In this regard, the qasida or poem inscribed around the rim of the bowl was essential for a correct interpretation of the aesthetic function of the original design of the fountain.
New hydraulic circuit
The restoration of the hydraulic circuit, the final phase in a process which commenced in 2002 with the removal of Lion No. 4, involved replacing the water pipes running into each of the eight fountains – located in the Galleries and in the Eastern and Western Pavilions, the Hall of the Two Sisters and the Hall of the Abencerrages, and the central Fountain of the Lions – as well as cleaning and restoring the floor fountains and surface channels.
As new features, the circuit will be independent from the rest of the Alhambra (for conservation reasons), water quality will be controlled and system sustainability is guaranteed by means of recirculation of the supply.
The makeover, carried out in coordination with archaeological works in the courtyard, also involved the partial raising of floors affected by the works, and the cleaning and consolidation of stone elements of the fountains.
From now onwards, each Lion will have a new hydraulic system, consisting of a reinforced silicone pipe running through the inside of the original pipe and connected to an unpolished stainless steel spout ending in a concave section in the mouth of the lion. This is connected to the water supply through a hole made underneath the left front paw of each sculpture, next to which there is a small inspection box with a cut-off key and a flow regulator, to set the exact position of each jet of water.
For the reinstallation of the bowl, a unique piece weighing 2.10 tonnes when empty and 3.30 tonnes when full, and its connection to the new system, it was first dismantled using a hydraulic lifting system. The mediaeval spout, weighing 90 kilos, made it possible to recover the functionality of the piece.

To guarantee optimum conservation conditions for the Lions and the Fountain, PAG will have a specialised preventive maintenance team on site, equipped with state-of-the-art technology. Measures to be put into place will include the installation of instruments for recording and analysing conditions in the Court of the Lions, a weather station to evaluate the behaviour of the elements in the micro-climate in the Court, and an advanced security system.