Griñán presides over the reopening of the Court of the Lions, which recovers its historical image and which will be open to the public 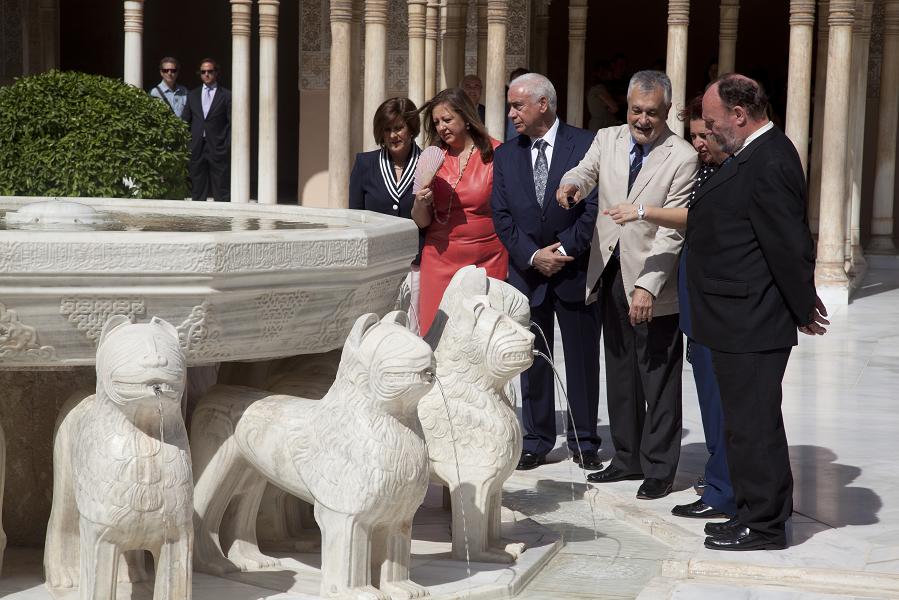 The president of the Andalusian autonomous government, José Antonio Griñán, has presided over the reopening of the Court of the Lions of the Alhambra this morning in Granada. As from today the visitors will be able to see the fountain, which has recovered its historical image. After ten years the citizens will be able to enjoy and appreciate the aesthetic values of the sculptures of the lions and the Nasrid fountain, both pouring water again.

The first stage of the complete restoration of the Court of the Lions has been organised by the Patronato de la Alhambra y Generalife in collaboration with the Spanish Institute of Historical Heritage and the Andalusian National Heritage Institute. Other professionals have worked in this project as well: a multidisciplinary technical team from the universities of Granada, Córdoba and Seville; about 20 companies –mostly Andalusian– which have used over a hundred of their specialized professionals, and eleven aditional experts who have worked on the restoration directly.

The project, with a total cost of 2,243,730 Euros, has recovered the fountain’s image and restored the hydraulic system with authenticity and integrity –crucial principles at World Heritage sites.

The restoration at the Palace of the Lions began in 2002, when the first of the twelve sculptures –the Lion number 4– was removed. In 2007 the rest of the lions were removed of the court to undergo a long process of restoration. Thick calcareous layers were eliminated, biological invasion stopped, breaks from different causes repaired, and metallic elements and harmful accretions such as concrete removed. This restoration took place at the Patronato de la Alhambra y Generalife workshops. The basin had to be restored on site due to its size. A temporary workshop was installed at the court for this purpose.

Following the fountain’s hydraulic circuit restoration works in 2011, an excavation based on archaeological methodology took place. The excavation made it possible to document and preserve the materials found, while it confirmed the existence of archaeological remains dated from a period previous to the construction of the emblematic Palace of the Lions, which was built by Muhammad V in the second half of the XIV century.

The lions came back to their original location in December 2011. They had remained nearly two years at the crypt of the Palace of Charles V. After their restoration they have been exhibited and visited by over a million people. The authenticity principle –which has guided the lions’ restoration– has highlighted the meticulous and perfectionist process followed to create this sculptural gem.

This stage of the Court of the Lions complete restoration has concluded with the laying of 250 marble pieces. The pieces, which have  different measures and weights –ranging between 90 and 110 pounds– cover a 400 square metre surface and have been specifically designed for this location. The project has been coordinated by the Conservation Service of the Council of the Alhambra under the supervision of the architect Pedro Salmerón.

In an effort to keep the lions and the basin in a perfect state of preservation, the Patronato de la Alhambra y Generalife will have specialized and leading-edge technology equipment from now on. Among other facilities the Complex will be provided with instrumentation equipment to register and analyse data –which would be located at the Court–, a weather station –which will evaluate the adaptation of the materials to the microclimate of the Court of the Lions–, and an advanced security system.
In order to carefully explain to the visitor the recent works promoted by the Patronato de la Alhambra y Generalife in the Court of the Lions, an exhibition Fountain of the Lions. Methodology of a Restoration has been installed at the crypt of the Palace of Charles V. The exhibition will show documentary videos about the most relevant works developed in this area.