The tile panel from the Mexuar room 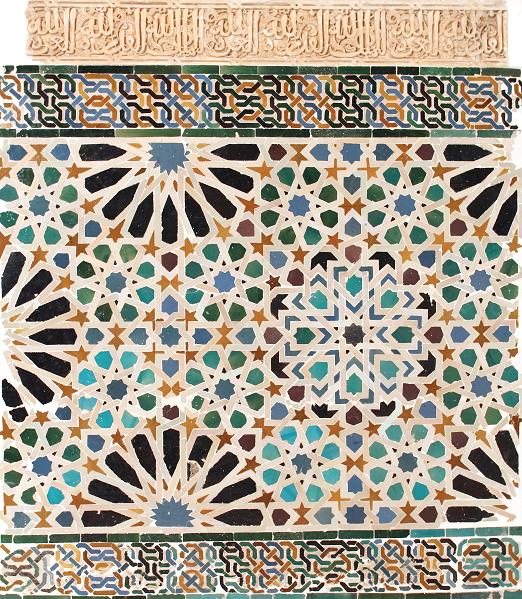 May’s museum piece of the month is the tile panel from the Mexuar. Every Saturday in May, from 12.00 noon onwards, as part of this free programme, organised by the Patronato de la Alhambra y Generalife, Gaspar Aranda, doctoral candidate in History of Art and M.A. in Museology, will reveal the peculiarities of this element of Nasrid decoration in Room V of the Museum of the Alhambra.
This large panel, originally part of a much larger wainscot, consists of a plasterwork frieze running along its upper part and a large ceramic pane decorated in the alicatado tiling technique, which involves small glazed tiles cut or moulded into different shapes and arranged into intricate geometric patterns, somewhat like a ceramic mosaic.
This particular piece involves two geometric designs, one a braid of narrow, coloured ribbons, running along two bands above and below the larger pane. These blue, ochre, green and black ribbons, on a white background, weave over and under each other in a strict interlaced pattern. The geometric basis is quadrangular-octagonal, obtained by overlaying two square grids in different orientations.
The second design, which occupies the central part of the panel, is made up of small polygonal shapes in the same colours as the interlaced ribbons, arranged into compositions around eight- and sixteen-pointed stars, making up ruedas (‘wheels’) outlined in white. In the central part, a large rueda bursts from a black central eight-pointed star, next to another, incomplete sixteen-pointed star rueda with long black zafates or polygons (cut off on its left side). This second rueda design is repeated in the upper and lower corners of the panel. A series of smaller eight-pointed star ruedas, with blue central stars and shorter zafates, fills the spaces between the larger ones. The geometrical basis for this design is more complex, consisting of several superimposed grid layers.
This panel was removed from the north-eastern wall of the Mexuar Room and transferred to the Museum in 1947, as it was discovered to be concealing a Nasrid archway which originally led onto the northern gallery of the Museum of the Alhambra. According to Gómez-Moreno in his Guide to Granada, the tile wainscot, with depictions of the Nasrid motto, the coat of arms of Carlos V and that of the Mendoza family, is a product of the mid-16th century, when the room was being decorated by Morisco artists to convert it into a Christian chapel.
When: Every Saturday in May, from 12.00 noon onwards
Where: Room V, Museum of the Alhambra, Palace of Carlos V.