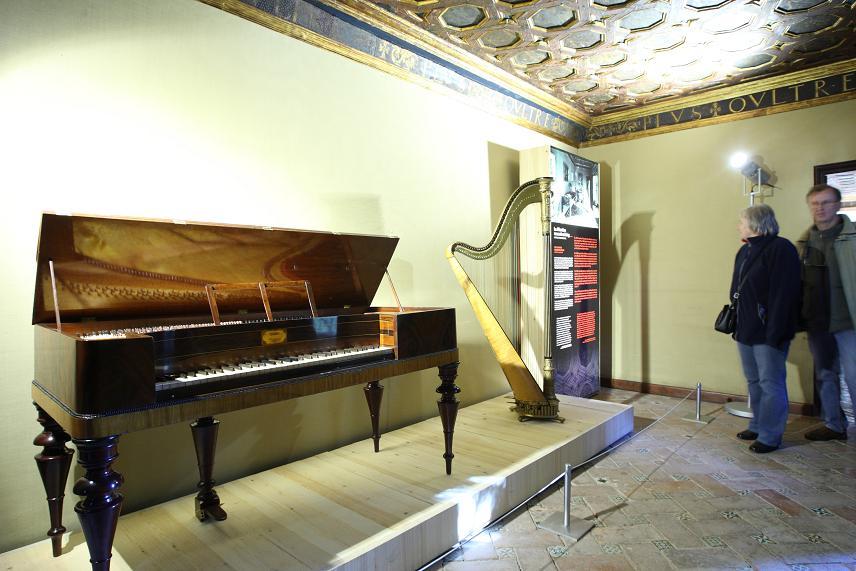 The Patronato de la Alhambra y el Generalife opens today to the public as the space of month, the chambers of Washington Irving (1783-1859), also known as the Emperor’s Chambers, featuring a collection of furniture and objects that evoke the Romantic era in which the American writer lived. Among the exhibits we can find a pianoforte, a harp, a bed and a wall clock, from the collection of the Patronato de la Alhambra y el Generalife. This event is part of the celebrations commemorating the 150th anniversary of the death of the author of “Tales of the Alhambra” organized by the Autonomous Body.
Throughout the month of February, exceptionally from Monday to Sunday from 8:30 to 18:00, those entering the Monumental Complex will have the opportunity to see an area normally closed to public visits for reasons of preservation and security.
Washington Irving fulfilled his dream to visit Granada and the Alhambra in 1828, where he stayed for a few days. However, his deep admiration for the Alhambra motivated him to return to Granada on the following year, staying this time in the Nasrid Palaces for nearly three months, from May the 4th to July the 29th of 1829.
At first, he spent his time in the rooms located on the top floor of the Nasrid Palaces, a loan from Colonel Francisco de la Serna, at the time governor of the Alhambra. Later, he moved into these Renaissance rooms, known as the Emperor’s Chambers, in reference to King Charles V, who promoted their construction in 1528.
The unique experience of living in the Alhambra and spending his day to day with its inhabitants, the “sons of the Alhambra”, stimulated his imagination and allowed him access to oral traditions that he used to write the work that best expresses his romantic vein, the Tales of the Alhambra. Between these walls, he worked on his texts about Christopher Columbus and began to outline his stories, which were published first in 1832 in London and Philadelphia, and then in 1833 in Valencia.
It is not the first time that the Alhambra remembers Washington Irving. In 1914, the first Patronato de la Alhambra placed a plaque on the entrance door of the chambers he occupied – known as Fruits hall due to their ceilings decorated in 1537 by Julio Aquiles and Alejandro Mayner – in memory of the writer.
In 1929, the preservation architect of the Alhambra Leopoldo Torres Balbás (1923-1936) decided to commemorate the centennial of the American writer’s stay in these rooms and carried out a series of refurbishment works incorporating as well a set of Romantic objects, furniture and prints evoking the time of Irving.
In 1959, coinciding with the centenary of his death, more pieces of Spanish Ferdinand-and-Isabella-style furniture were acquired. Some of the exhibits from that time, such as ‘Castillo de Gaucín’ (1849), by G. Pérez Villaamil, can now be seen in the exhibition ‘Washington Irving and the Alhambra: 150 anniversary’, that can be found in the Crypt  and in the Chapel of the Palace of Charles V.