Washington Irving “returns” to the Alhambra 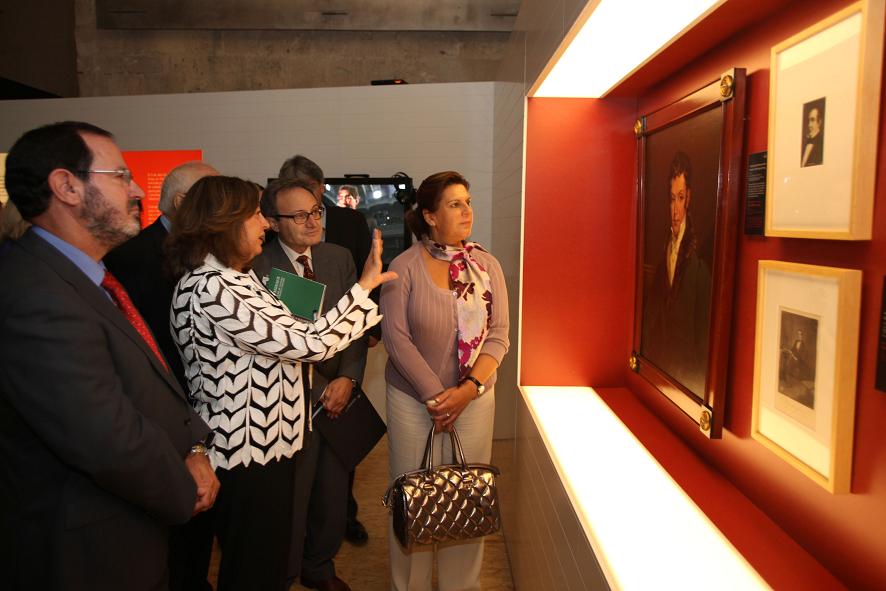 “Washington Irving and the Alhambra: 150 anniversary” is the title of the exhibition through which the Patronato de la Alhambra y el Generalife commemorates the North American writer 150 years after his death. From today until February 28, in the Chapel and Crypt of the Palace of Charles V will be on display original manuscripts, letters and notebooks, first editions of his books, drawings, engravings and high quality paintings, historic photos and filmography, interactive material and scale models.
The exhibition ‘Washington Irving and the Alhambra: 150 anniversary’ is a part of the commemorative program dedicated to the author of Tales of the Alhambra, whose first edition´s 175 anniversary was in 2007. The exhibition recalls Irving´s journey through Europe and Spain, paying special attention to his tour through Andalusia, Granada city and his beloved Alhambra.
The exhibition, with 189 pieces on display, in large part from the Archive and Library of the Patronato de la Alhambra y el Generalife, is supported by the collaboration of 40 lender institutions, as the New York Public Library, the Hispanic Society of America, Museo del Prado, Museo Romántico, the National Library, Patrimonio Nacional, as well as museums of Great Britain, France and Germany, together with private collections.
The exhibition has been supported by “la Caixa” and the company Rober in terms of diffusion, and it is focused on four large subjects: Portrait of the artist; Journey to Spain; Granada and The Alhambra: the enchanted palace, are the general areas zoned into several sections.
Furthermore, this exhibition brings back again the importance of the publication of Tales of the Alhambra, considered as the first world-wide promotion action of the monument. In fact, this work linked Washington Irving (New York, 1783-1859) in a very intense way to Spain, as well as it showed to the entire world the Granada the American writer got to know.
And within Granada, the Alhambra, the other, superposed city, observed from the Nasrid palace in which he was fortunate to live. Here he was living and writing, so confident of the palace´s magic and “enchantment” as well as of the harsh fact of its miserable state of preservation; and also of its peculiar inhabitants, “the sons of the Alhambra”, as well as of the need to discover to the world this special monument. Tales of the Alhambra has gripped generations of travelers who have figured with this text the mysteries and legendary intrigues of the Nasrid palaces. In the exhibition´s book area, it is possible to corroborate the success of this work, with hundreds of editions in all languages, an unusual abundance of illustrations and its adaptation to educational uses and movie inspiration.
Romantic traveler
His literary work apart, Washington Irving was also the Romantic traveler par excellence. Due to his strong interest in getting to know the places he admired, he frequently travelled through Europe, especially to cities like London, Paris, Bordeaux, and in Spain, successively Madrid, Seville and Granada.
His visit to Spain was due to his interest in the figure of the discoverer of America, Christopher Columbus, but soon he was fascinated by the Spanish history from the Middle Ages to modern times, also by the peculiar crossover of Islamic and Christian culture, and finally, by the Alhambra. That´s how he made two journeys to the city of the Alhambra, the first one from May 9 to 20, 1828, finding accommodation in the Fonda del Comercio, and later, in his second journey with longer staying, from May 4 to June 29, 1829, with accommodation in the Nasrid palace, fulfilling one of his wishes.
The exhibition “Washington Irving and the Alhambra: 150 anniversary” is addressed not only to experts, but also to the general public which will understand the close liaison between Washington Irving and Granada and Andalusia.

Since modern management has been introduced to the Patronato de la Alhambra y el Generalife, there has been the desire of paying an emotional homage to him, which found expression in the marble slab placed in 1914 by the first Patronato de la Alhambra in the rooms he lived in and designed for the Emperor Charles V. Later, in 1929, in the same time the Museo Casa de los Tiros was opened, Leopoldo Torres Balbás, architect and curator of the Alhambra, carried out an environmental museographic approach in this area, brought to an end in 1959, coinciding with the celebration of the centenary of the death of the writer. In this occasion, the Granada City Council organized the first public homage to the North American writer with a series of lectures and a slab that has survived until today in proximity of the font next to the Gate of Justice.
Fifty years after, the Patronato de la Alhambra is paying a merited tribute to Washington Irving with this exhibition that aims to recall a man who converted the visit to the monument into a life experience, and who contributed to the wish that many others would like to repeat that experience, appealing to universal values the Alhambra still has today.