Visions of the Alhambra of Álvaro Siza fascinates the Portuguese President 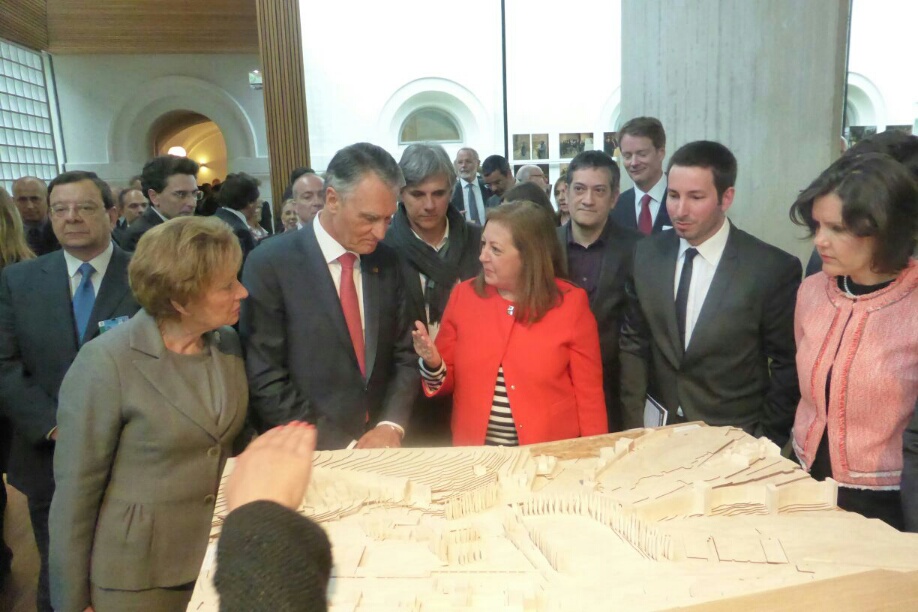 The exhibition arrived today at the National Museum of Art, Architecture and Design in Oslo after a successful stay at the Alhambra itself in which it was visited by over 46,000 people.

Earlier tonight the President of Portugal Mr Anibal Cavaco Silva said that he was fascinated by the Alhambra in Oslo (Norway), when he visited the exhibition ‘Visions of the Alhambra’, which displays his compatriot Álvaro Siza’s architectural vision of the Monument. The exhibition arrived today at the National Museum of Art, Architecture and Design in Oslo after a successful stay at the Alhambra itself in which it was visited by over 46,000 people.
As part of his official visit to Norway, Cavaco Silva inaugurated this exhibition at the National Museum of Art, Architecture and Design in Oslo and declared “I was fascinated. It is an honour to be here presenting an exhibition about this master of universal architecture with a project for such a universal place as the Alhambra”.
The Director-General of the Council of the Alhambra and Generalife, María del Mar Villafranca, guided the President on his visit together with the Granada architect Juan Domingo Santos, who co-authored with Siza the Puerta Nueva project, which won the International Ideas Competition to design a new welcome and reception centre for visitors to the Monument. After his visit to the exhibition Cavaco Silva highlighted "the intelligent way in which contemporary architecture resolves the various challenges in a fully integrated way, bearing in mind that the Alhambra is a World Heritage site".
He also praised Álvaro Siza, whom he said was a reference in the field of architecture at world level and that with this project “the historic and the contemporary come together so that society can continue enjoying all the values provided by Heritage”. The official ceremony was also attended by staff from the Spanish Embassy in Oslo, as well as by important personalities from Norwegian politics and culture.
This travelling exhibition produced jointly by the Council of the Alhambra and Generalife and the Aedes Architecture Forum of Berlin invites us to discover the architectural project for the New Entrance and Visitors Centre of the Alhambra, jointly designed by Álvaro Siza Vieira and Juan Domingo Santos, architects from Portugal and Granada respectively, who in 2010 won the “International Ideas Competition: Atrium of the Alhambra”.
After its presentation at the Aedes Architecture Forum in Berlín in March 2014, the exhibition travelled to the Vitra Design Museum (Weil am Rheim, 2014), the Palace of Charles V (Granada, 2015) and the National Museum of Art, Architecture and Design (Oslo, 2015). Next year it will be on show at the Aga Khan Museum (Toronto, 2016-2017).
Using a combination of audiovisual exhibits, drawings, plans and scale models, the exhibition invites us to immerse ourselves in the sensitive, conceptual approach of these magnificent architects, who have managed to combine the historic and the contemporary
According to the guidelines set out in the Alhambra Master Plan, this new space is to become a real place of access to the monument that is fully adapted to the area in which it will be located; a space that is modulated by the topography of the terrain, which will be partly underground and which will dialogue respectfully with the monument and the area around it without imposing itself in any way.
The main objective is to improve the entrance to the monument and cover a wide range of services for visitors which are today considered vital in one of the world’s most important cultural destinations: to welcome, guide, inform … It must also house a restaurant, cafe, toilet facilities, offices, left luggage, bookshop, meeting-points and places to rest etc.
Another important feature will be its role as a space of transition between the fast pace of the keen traveller, the hustle and bustle of the city … and the tranquil, sensual introspective space offered by the Alhambra. The Atrium will help us prepare our senses and our outlook, so as to be able to fully enjoy the experience of our most unique heritage … The vocabulary of light, shade, water and nature must transport us smoothly from the present to the sensitivity of the Nasrids, the builders of these palaces.
The exhibition ‘Visions of the Alhambra – Álvaro Siza’ installed in the Crypt and the Presentation Room of the Palace of Charles V was visited by 46,287 people. The exhibition has also aroused the interest of numerous experts, architects with a high international reputation and students from various Architecture Schools in Oporto, Oslo and the United States who travelled to the Alhambra to find out more about the project for the Puerta Nueva, the Alhambra’s future Welcome and Reception Centre.
For more information, please visit www.alhambra-patronato.es