Universo Morente in the Alhambra 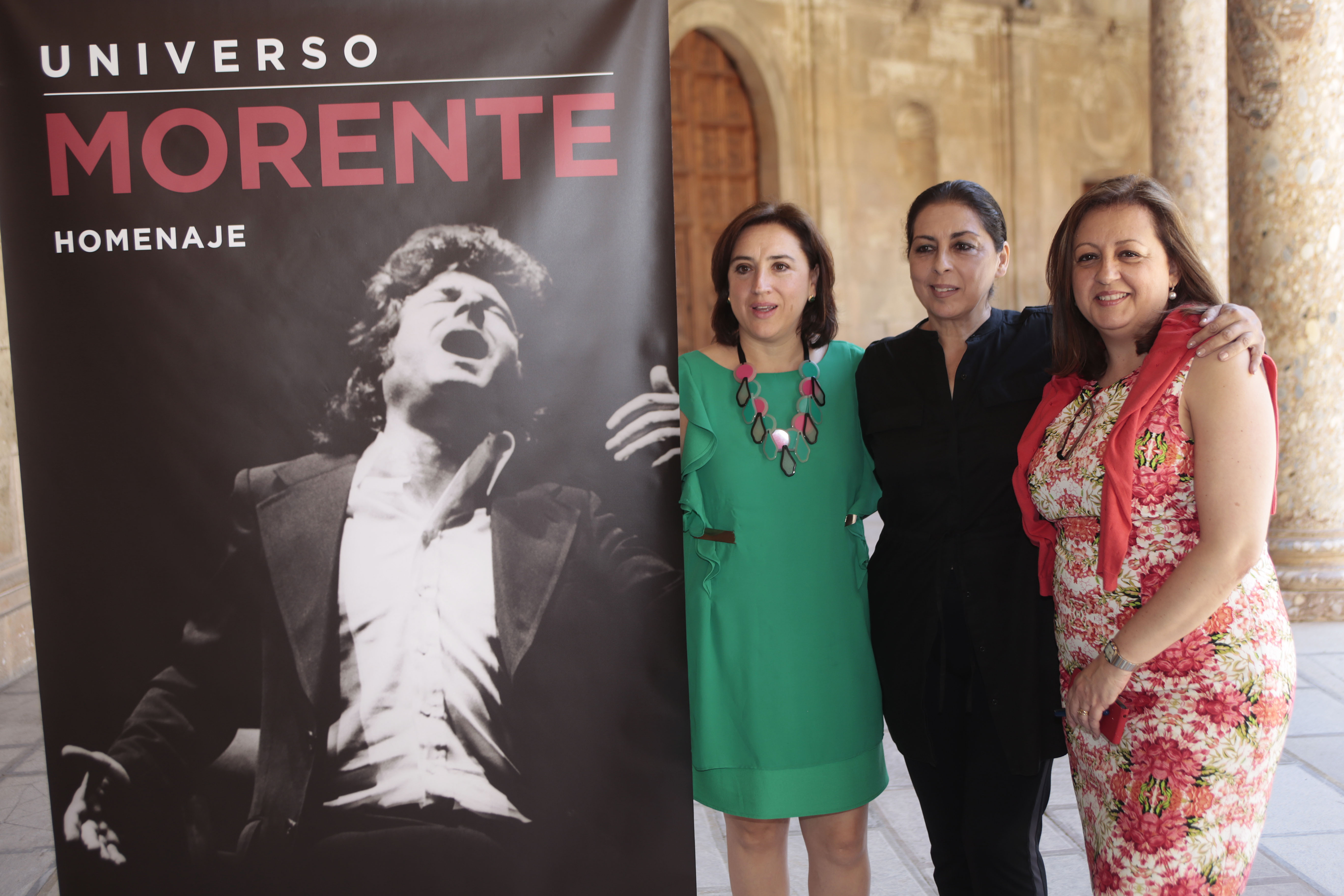 The Alhambra and Enrique Morente (Granada 1942 - Madrid 2010) come together in a series of events entitled Universo Morente...

The Alhambra and Enrique Morente (Granada 1942 – Madrid 2010) come together in a series of events entitled Universo Morente. This morning, María del Mar Villafranca, the Director of the Council of the Alhambra and Generalife, presented the events being organized as a tribute to the “maestro, to the musician, to the artist, to the person, to his family and to all Morente enthusiasts. To the man who dreamt about the Alhambra”.
The presentation was also attended by Aurora Carbonell, the widow of the multi-talented artist and by Sandra Díaz, the Delegate of the Regional Government of Andalusia in Granada, who said that “Morente has never left the Alhambra. His memory will live on here forever in this place that was a constant source of inspiration for him”.
Universo Morente is a broad-based multidisciplinary project in which art, performance, music, words and poetry combine to present the legacy of the artist from Granada, one of Andalusia’s best-known performers. The tribute is divided into two parts: the show  entitled ‘Graná canta, toca y baila a Morente’ (Granada sings, plays and dances to Morente), which will be held in various venues in Granada, the Teatro del Generalife (5 September), the Teatro Alhambra (6 September), Sala El Tren (20 September) and La Tertulia (26 September), and the exhibition Universo Morente, organized by the Council of the Alhambra and Generalife with the “passionate” support and participation of the Morente-Carbonell family, to be held in the Palace of Charles V, in the temporary exhibition rooms in the Granada Fine Arts Museum, scheduled for next October.
In Graná canta, toca y baila a Morente, which is scripted and directed by the flamenco dancer Juan Andrés Maya, it is expected that homage will be paid to “one of the greatest this city has ever produced, Enrique Morente” through flamenco dancing and singing with that special Granada flavour. It has also been confirmed that three of Morente’s children, Estrella, Soleá and José Enrique, will be taking part in the show in the Teatro del Generalife, on 5th September, so completing a “star-studded line-up” that includes artists such as Pepe Luis Carmona Habichuela, Pedro el Granaíno,  Amparo Heredia la Repompilla, José Fernández, Joni Cortés, Rafaela Gómez, Rafi Heredia, Sara Heredia; guitar pieces by Antonio Heredia el Chonico, Manuel de la Loles, Manuel Fernández, Rafael Fajardo, and recitals by Curro Albaycín and Mariquilla with Tatiana Garrido.
On the day after, 6th September, Juan Pinilla, Antonio Gómez el Colorao, Pedro Carmona, Antonio Campos, David de la Jacoba, Gema Caballero and Antonio Fernández will take the stage at the Teatro Alhambra alongside the guitarrists Juan Habichuela Nieto, Carlos de la Jacoba, David Carmona, Rubén Campos, Miguel Ochando and Alfredo Mesa, with dancing by Patricia Guerrero, Ana Calí, Antonio Vallejo and family.
In the Sala el Tren in Granada, on 20 September at 21:00, Chonchi Heredia, José el Francés, La Nitra, Sergio Colorao, Monty, Toni Maya, El Nitro, Fernandurri, Raúl Mikey, Irene Cebollas, José Antonio Cebollas and Marcial Heredia will dedicate their performances to the maestro Morente, accompanied by the guitarists El Petete and Luis Mariano, with Julián Heredia on the bass and dancing by Antonio Canales, Luis de Luis and Popo Gabarre. The icing on the cake will be provided by the groups Fausto Taranto and Lagartija Nick.
Tickets for these performances are available from today at the Teatro del Generalife, Teatro Alhambra and Sala El Tren, and at the different outlets run by El Corte Inglés, a company which has collaborated with this event.
A night of poetry and debate with Enrique Morente has also been organized. It will be on 26th September at 21:00. Admission will be free until the venue is full.
The Universo Morente exhibition project will be curated by Amaranta Ariño and divided into 5 sections: In the words of Enrique Morente, Discography, Art work, Listening points, Projections. A catalogue will be published with photographs and pictures of his works along with an illustrated biography of Morente with texts written among others by Amaranta Ariño, Pedro G. Romero, José Manuel Gamboa, Balbino Gutiérrez, José Luis Ortiz Nuevo, Miguel Mora and Antonio Pradel.
The exhibition will be inaugurated with a performance by Morente’s widow, Aurora Carbonell, and the Morente family. The event will take place at dusk in the courtyard of the Palace of Charles V amidst stage art in the form of wire sculptures made by Aurora Carbonell.
For more information, please visit www.alhambra-patronato.es