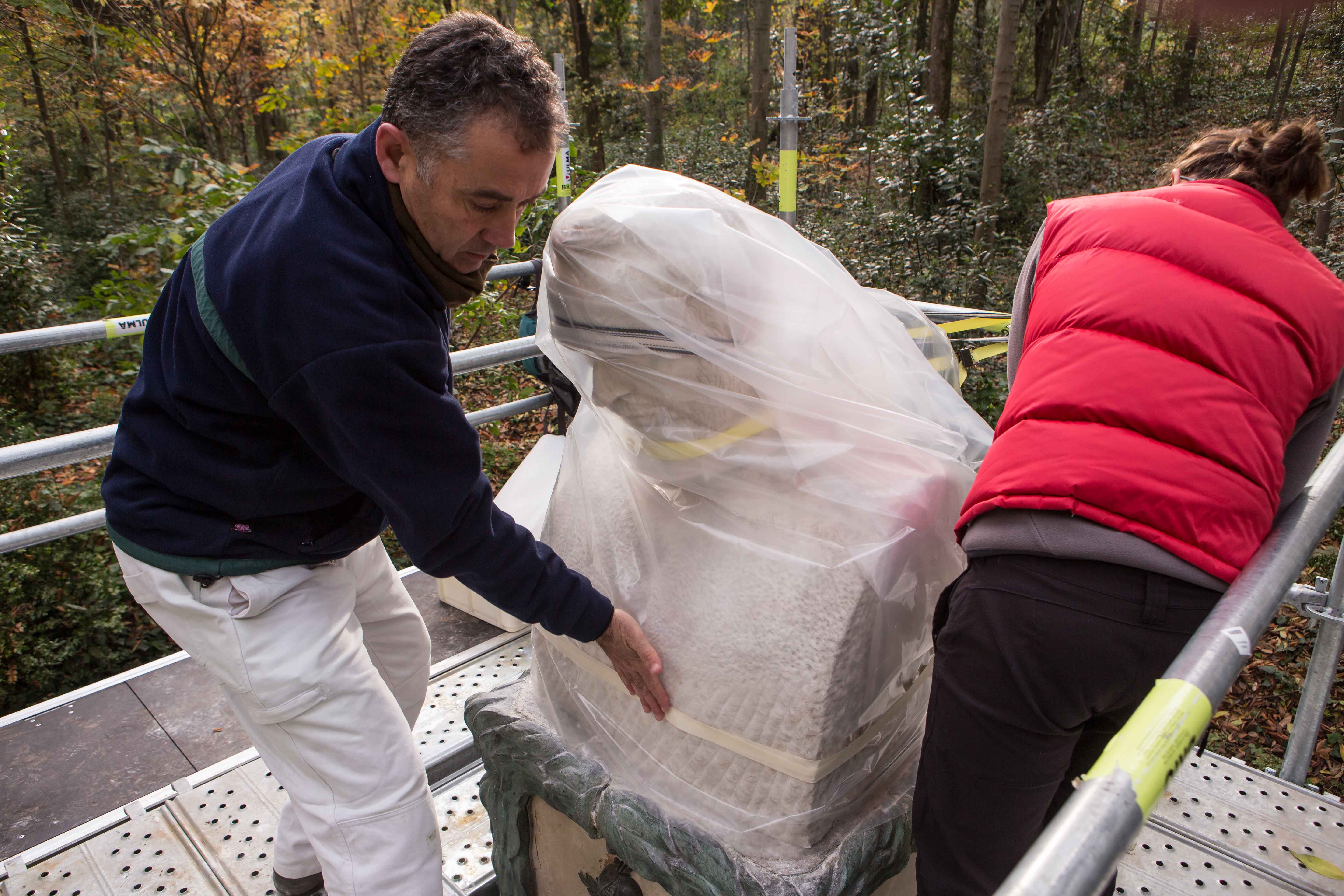 The sculpture by the Almería artist Juan Cristóbal (1897-1961), which is dedicated to the intellectual Ángel Ganivet (1865-1898) and was installed in the Wood of the Alhambra in 1921, has ‘retrieved’ its head, which was damaged during strong winds in Granada on 22nd November which brought down one of the large trees that surround the sculpture.
This morning, the Director of the Council of the Alhambra and Generalife, María del Mar Villafranca, was in the wood, supervising the work prior to the replacing of the damaged head, and explained that thanks to “swift” action, “all injuries were avoided. Throughout the afternoon of 22nd November, we worked effectively and diligently, with an emergency and safety team controlling the situation from the word go, so as to avoid any more serious damage”.
In just two weeks the Alhambra’s Conservation and Restoration Department have completed the reconstruction of the piece that was struck by the falling tree “on the back of the neck, the most fragile part of the sculpture, where the stone is at its thinnest. The blow knocked the head off at the neck, and as it fell it struck the edge of the marble border around the fountain, damaging the border and fragmenting the edge of the neck”.
The architect-conservator of the Alhambra, Francisco Lamolda, explained that the wind also “shifted the monolith that forms the main platform for the bust and cracked the adhesive and replacement mortars”. Lamolda also made clear that the restoration work had centred on “cleaning the organic stains using chemical and mechanical cleaning procedures, joining the fragments and flakes together using adhesives and resin injections, removing fractured mortars, joining the two main parts together again with fibre-glass bolts, sealing cracks and repairing other minor defects”.
In his assessment of the damage, Rafael de la Cruz, the Head of the Alhambra’s Woods and Gardens Department, described the tree that was felled by the storm.  He said that it was a 110-year old Mediterranean hackberry that was 20.5 metres high, which had been growing near the Fountain of the Tomato in the Wood of the Alhambra. “The tree was knocked over during a period of intense wind in which gusts of over 50Km/h (level 7 on the Beaufort scale) and temperatures of 24.4ºC were recorded at the Fuentepeña meteorological station, extreme conditions which brought down various other trees and broke off numerous branches”.
The sculptural monument to Ángel Ganivet, a well-known intellectual from Granada, was inaugurated over 90 years ago and depicts a nude male figure holding a male goat by the horns. The face is that of the painter Manuel Ángeles Ortíz. This sculpture stands on a stepped platform of stone inside a pond. Behind it is a large rectangular column topped by the bust of Ganivet. In 2013, the marble sculpture was restored by the Conservation Department, who removed surface dirt and lime incrustations, as well as copper salts and oxides from the bronze sections. The idea of erecting a monument to the author of Granada la Bella was first put forward in 1908 on the tenth anniversary of his death.
For more information, please visit www.alhambra-patronato.es