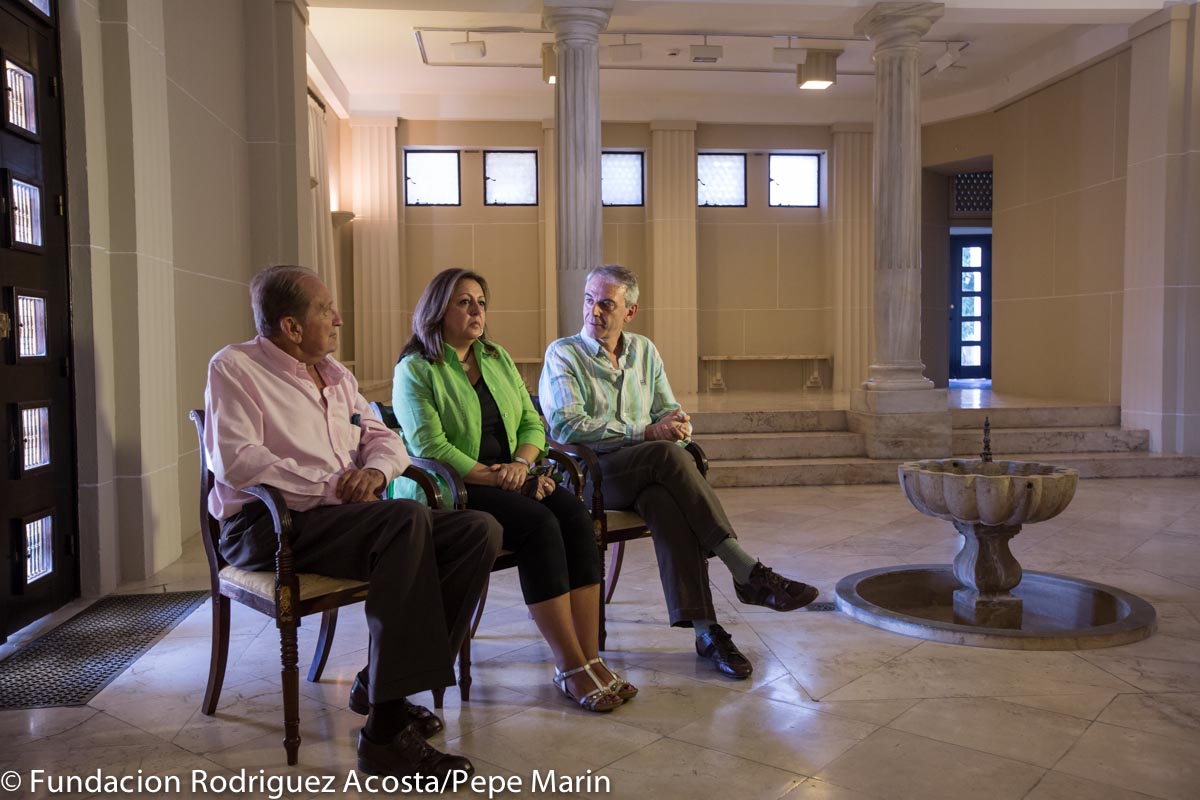 This morning the Chairman of the institution, the artist Miguel Rodríguez-Acosta Carlström...

This morning the Chairman of the institution, the artist Miguel Rodríguez-Acosta Carlström, and the Director of the Council of the Alhambra and Generalife, María del Mar Villafranca Jiménez, visited the Foundation to supervise the state of the building works, which will enable a new “reinterpretation of the space. From now on light will be playing a very important role, after the uncovering of two large windows in the foyer. We have also found latticework, Nasrid capitals, marble benches and pieces of modernist architecture that decorated the walls and which although we knew existed, had largely been forgotten. The idea is also to furnish the space with its original furniture”, explained Rodríguez-Acosta.
For her part, Villafranca stated that this finding will be “another incentive to come and rediscover the Carmen Blanco of the Rodríguez-Acosta Foundation, declared a National Monument in 1973 and appreciate its architectural details and original decorations”.
On the occasion of an exhibition of drawings by Federico García Lorca in the 1980s, wooden panels were hung on the walls in order to use the space as a temporary exhibition room, a provisional solution that became permanent, remaining in place for over 30 years, until now.

Since April when the Rodríguez-Acosta Foundation embarked on a new phase, in which the Regional Government of Andalusia has taken on new responsibilities for it, acting through the Department of Education, Culture and Sport and the Council of the Alhambra and Generalife, various different cleaning jobs have been performed on the ornamental pieces in the gardens, new itineraries have been laid out in order to open the institution to the public, with different types of visit including a combined visit with the Alhambra. Various different cultural activities have also been planned.

The Rodríguez-Acosta Foundation was created in 1941 by order of the will of the painter José María Rodríguez-Acosta. Its headquarters are in Granada in the White House built by its founder between 1916 and 1930 alongside the ancient towers known as the Torres Bermejas and near the Alhambra and Generalife. Its objectives include the promotion and dissemination of culture, a duty it has performed through various cultural programmes: grants to artists wishing to attend Fine Art schools, competitions, exhibitions, conferences, seminars, recitals and publications of research about Andalusia and Granada.

The Rodríguez-Acosta Foundation has expanded its collections of artworks and documents with a number of donations, including one from the Gómez-Moreno family in 1973, which led to the creation of the Institute of the same name.