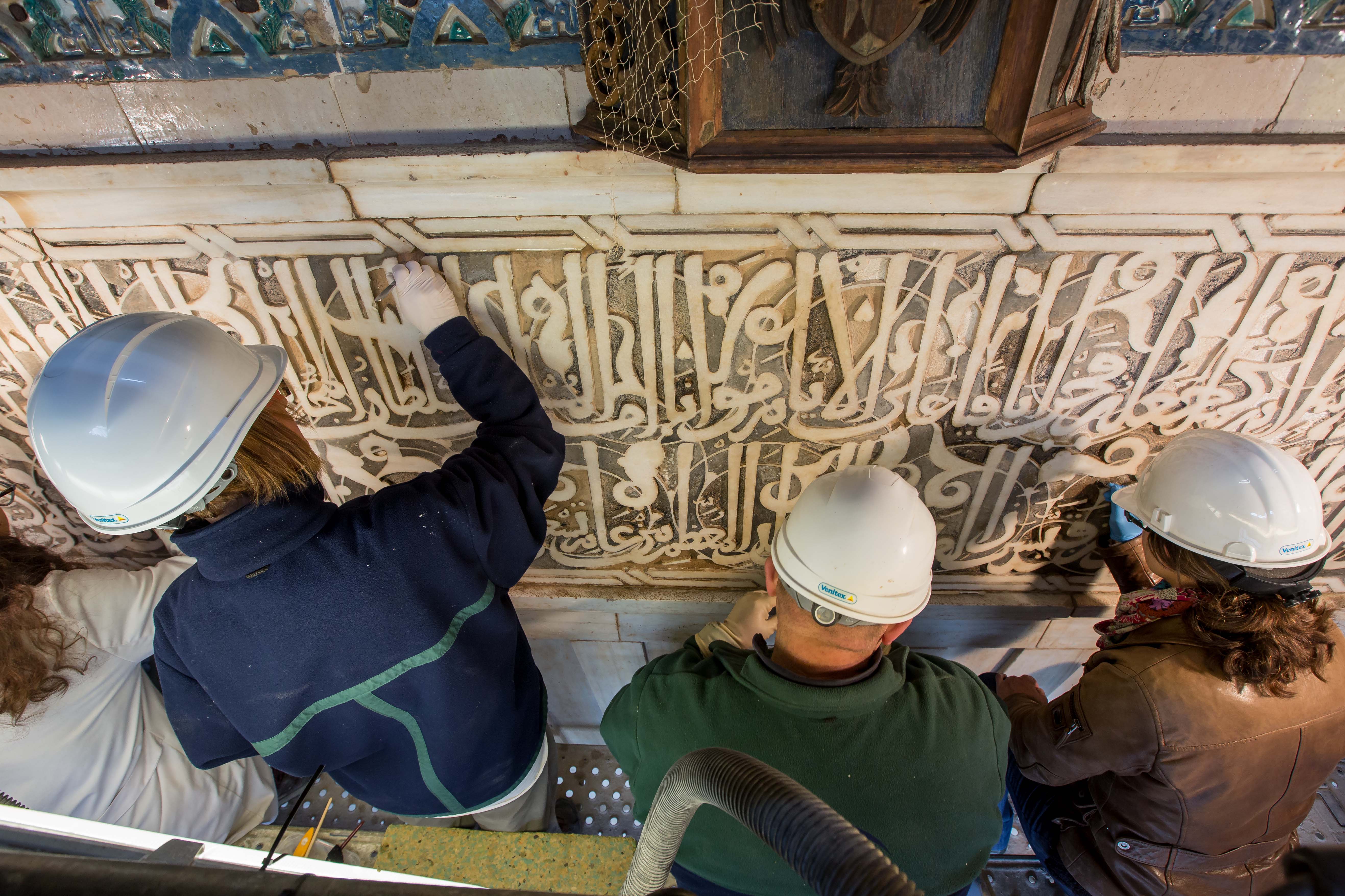 The Alhambra never ceases to surprise. The restoration of the Puerta de la Justicia or Gate of Justice has uncovered various original Nasrid decorations created with unique craft techniques. The Conservation and Protection Department began work last October on this emblematic space built by Sultan Yusuf I in 1348, the date that appears in an inscription in Arabic on the foundation stone situated in the outer façade, one of the few that have been found in the Alhambra.
This morning the Director of the Council of the Alhambra and Generalife, María del Mar Villafranca, came to supervise the restoration work on the gate, which is now in its final stages. She commented that “the cleaning work is producing huge surprises. The restorers have uncovered materials and colours that had lain hidden and have exposed unique delicate pieces worked with meticulous care, excellent examples of the exquisite, highly refined craft techniques used by the Nasrids in epigraphy, plant motifs, etc. All this information gives us a clearer picture of the Alhambra in the 14th and 15th centuries”.

The restoration work on the gate has focused particularly on the outer façade, in which the restoration team have cleaned the columns, the arch, the canvas of stone, the founding inscription in Arabic, the panel of sebka (decorative rhomboid patterns), the niche, the copy of the Gothic sculpture, the arches and walls with mural paintings and the wooden door with a metal lining. Work on the inner facade has concentrated on the stone features and imitation-brick murals.

For his part, the architect-conservator of the Council of the Alhambra and Generalife, Francisco Lamolda, explained that during the cleaning and consolidation of the different parts of the Gate the restorers found that “after removing the layer of dirt obscuring the ashlars, other stones in different colours appeared which make the gate even more beautiful. We are currently studying an Arabic inscription in inlay carved out of white Macael marble with incrusted slate, a piece that shows that the mediaeval craftsmen also had great skill when it came to working with slate. This is the only example of this technique so far documented in the Alhambra”.
The Restoration Department of the Council of the Alhambra and Generalife was responsible for the technical management of this project, which cost 47,133.20€ and involved a multi-disciplinary team of restorers specializing in wood, plasterwork and tiles, together with professionals from the works and maintenance department, and the masonry, carpentry, plumbing and electricity workshops. Researchers from the University of Granada also took part in the research and analysis of the materials.
The Puerta de la Justicia has great symbolic value in the Alhambra. The sculpted hand which appears in the keystone of the great outer arch and the key situated above the inner entrance arch are well-known Islamic symbols, which contrast with the Gothic image of the Madonna and Child by the sculptor Roberto Alemán. This sculpture was installed by order of the conquering Christian King and Queen on the large stone panel with the Arabic inscription relating to the foundation of the gate, which appears above the key.
The sculpture of the Madonna which today occupies this space is a copy of the original on display at the Granada Fine Arts Museum. The main aim of the restoration work was to thoroughly clean this work of art, originally painted in an array of colours which had been obscured by a thick layer of dirt.