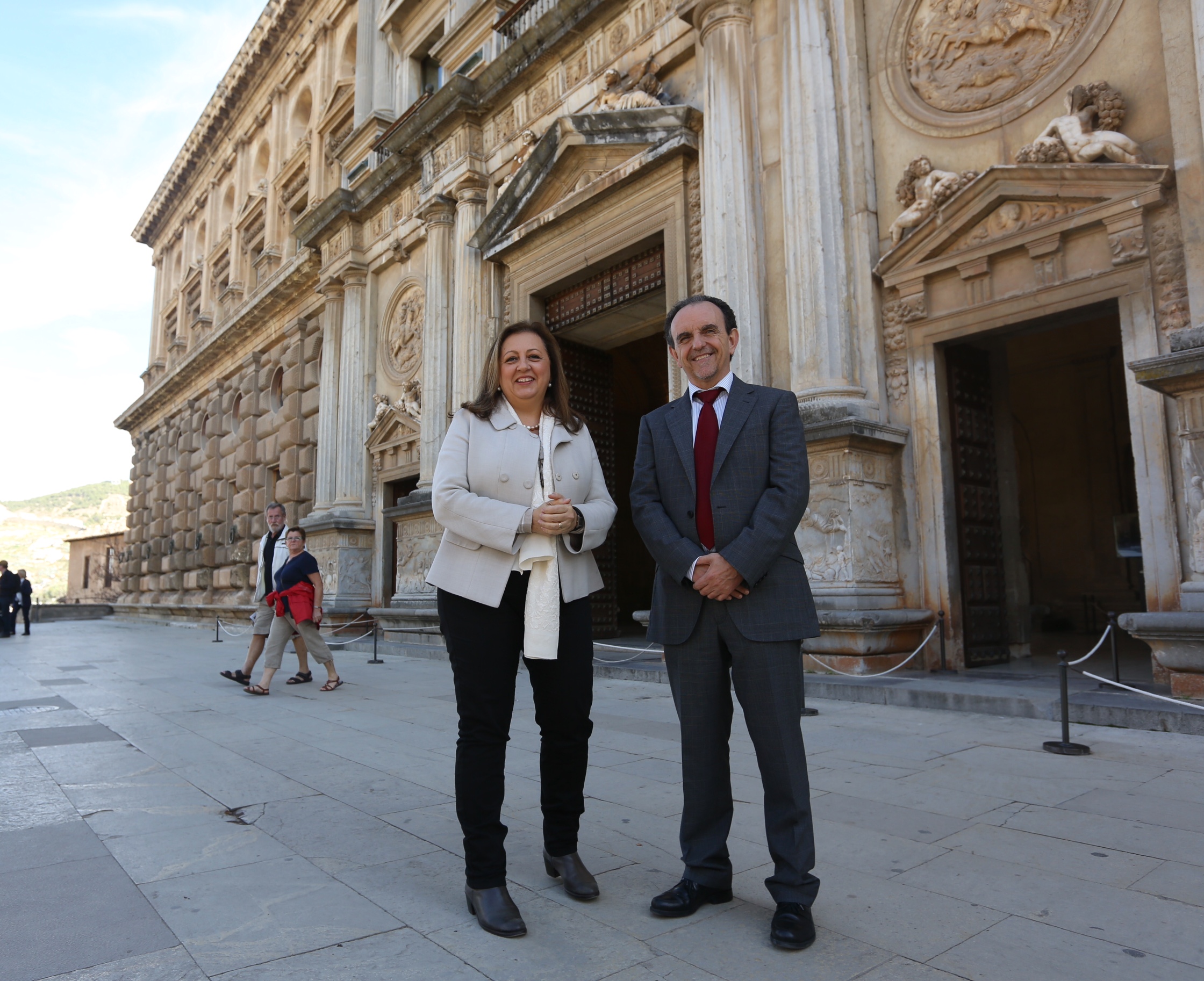 Daily news related to the Council and the Alhambra and the Generalife complex
Rafael Rodriguez presents an agreement for the development of products for the promotion of tourism in the city of Granada as a whole.

The Regional Ministry for Tourism and Commerce and the Council of the Alhambra and the Generalife are working together on a range of initiatives to promote and market the monument as a tourist destination, enhance the quality of tourist visits and develop products that can stimulate business in different areas of the city of Granada, in order to attract more visitors and encourage more people to stay overnight in the city.

According to the cooperation agreement presented today in Granada by the Minister, Rafael Rodriguez, and the Director of the Council, María del Mar Villafranca, both bodies will work to enhance the quality of the visit and the design of a cultural product that aspires to excellence. They will also work to ensure responsible and sustainable use of the Monument by both tour guides and travel agencies.

Under the terms of the agreement, the Council and the Ministry will develop initiatives to promote and create products that encourage visits to other tourist attractions in the capital, such as the Albaicín, so helping to increase the number of overnight stays in hotels. These initiatives will include the organization of familiarization trips (fam trips) and the promotion of the Alhambra in trade fairs and trade missions in Spanish and international markets.

According to Rafael Rodríguez, this agreement “is of historic importance in that it is the first time in 105 years of marketing the Alhambra for tourism, that a public body with powers in tourism has done so”. It is also “a step along the road in the Department’s policy of cooperation with other bodies to enhance a key sector of our economy such as culture”.

He also stressed that this collaboration will enable better use of public resources and increased efficiency in the management of tourist flows, so strengthening the position of the most visited monument in Spain, with more than 3.2 million visitors last year.

To this end, Rafael Rodriguez announced that he will be speeding up the planned move of the Ministry’s tourist information office in the city centre "to its new location in the place with the highest number of tourists in the city, next to the ticket office of the Alhambra, and at no cost whatsoever".

The agreement also provides for joint actions aimed at launching projects for the innovation and application of information technology to improve the management and the creation of new tourism experiences during the visit to the monuments. The Andalucía Lab will be advising on the implementation of these measures.

The Alhambra and the Generalife group of monuments received a total of 3,244,874 visitors last year, of whom 2,315,017 came for tourism, cultural and educational reasons. Of this total, 1,736,363 were visitors who stayed overnight in the city of Granada and 51,565 stayed in other parts of the province. 479,557 were day-trippers and the rest were local residents. All in all, these visitors have an economic impact on the city worth around 500 million euros a year and provide direct and indirect employment to about 6,800 people.

Rafael Rodríguez and María del Mar Villafranca were accompanied at the presentation of the agreement held at the Palace of Carlos V, by the Delegate of the Regional Government in Granada, Sandra García; and the Territorial Delegate of Public Works, Housing, Tourism and Commerce, Manuel Morales, among other representatives of public authorities.