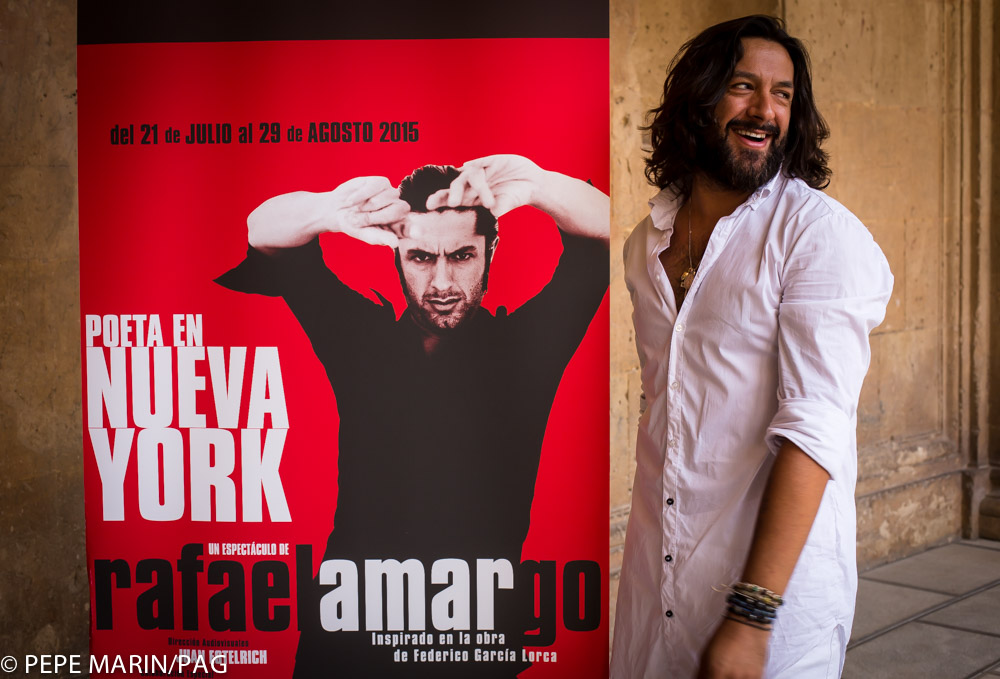 The show staged as part of the Lorca and Granada cycle is on from Tuesdays to Saturdays at10 p.m until 29th August.

The Delegate of the Regional Government, Sandra García accompanied by the dancer and choreographer, Rafael Amargo and the coordinator of the Lorca and Granada in the Generalife Gardens programme, Mariano Sánchez, presented the production, which is inspired by ‘Poet in New York’ by Federico Garcia Lorca and directed and choreographed by Rafael Amargo. The first night is on Monday 20th July at the Generalife Theatre and from then on it can be seen from Tuesdays to Saturdays at 10 p.m. until 29th August.

The original production was first staged with great success in 2002 in the Lope de Vega Theatre in Madrid and established Rafael Amargo as one of the main innovators in flamenco today. In July 2014 he updated the show to bring it back to the stage with new choreographies, music and audiovisuals in “a new version that respects the original but is more in tune with a more mature stage of my life” the author explained.

He decided to use the same group of artists and the same production team in which Edith Salazar and Eduardo Cortés were responsible for the music, Juan  Estelrich was the stage and audiovisual director, Nicolás Fischtel was in charge of lighting and David López of production. It also has some of the original cast with special collaboration from two of Granada’s best-known flamenco artists, Toni Maya and María La Coneja, who will be sharing the stage with the next generation of the Maya family: Maite Maya will be singing and Antonio Jiménez will be playing the flamenco box.

Rafael Amargo’s version of ‘Poet in New York’ is a flamenco show that combines the most traditional aspects of this art with a fusion of contemporary tendencies in music which include jazz pieces and Latin music, which are blended with poems from the book by Federico Garcia Lorca recited in image form by top-class actors such as Marisa Paredes, Cayetana Guillén Cuervo and Joan Crossas.

“I knew I had to do something that mixed both the old and the contemporary at the same time and that there would have to be deep song flamenco such as the Jewish Cemetery, a bit of folk… poems such as Living Sky in which I imagined a box of dolls where a toy ballerina … dancing to the sound of the notes would sketch out a whole array of figures like those depicted by Lorca… The Black Men, a wedding in an imaginary Harlem full of gypsies. Death and The Ruin of a diva whose career is in fast decline. The sound of a herd of horses. An ode to Walt Whitman. The city, the metropolis wrapped up in itself in repetitions and imitations of steps, of the monotonous repetitive movements that are far away from deepest Andalusia. A rag time from Broadway at its peak…..” explained Rafael Amargo.

The dancer and choreographer said that part of the success of the show is due to the team that has worked with him since its creation. The film director Juan Esterlich has done a fantastic job with the audiovisual and stage management, as has Antonio Belart, the costume designer, who has already received three Max Performing Arts Awards for the costumes in A Little Night Music, Black the Clown and Follies.

Amargo also highlighted the important role played by the musical director, Edith Salazar, a Venezuelan composer, singer, teacher and pianist who is well-known for her participation in television programmes such as Operación Triunfo, Que tiempo tan feliz and Levántate, and who composed all the pieces in which flamenco has been fused with other styles. She also takes part in the show itself playing three pieces live on the piano.

Rafael Amargo also recruited Manuel Segovia, the director and choreographer of the Iberica dance company, who is responsible for the part with Spanish popular folklore, which is set to music by Carlos Núñez and Berrogüeto.

With an excellent track record of packed theatres and high praise from the critics, Poet in New York is now coming to the Generalife Theatre to offer an original perspective of the trip that Federico Garcia Lorca made to New York in 1929. Amargo also visited the famous American city as part of his preparations for the design of the set, two trips and two universes which have come together to shape a production that is certain to surprise the audience.

Sandra García emphasized that the Regional Government “will continue to support programmes such as this one which provide a boost to the local economy and create jobs and which are an important tourism and cultural reference in the province and beyond. I am sure that this new show will once again prove highly satisfying in an artistic sense because of its high quality and also in commercial terms because of the tourism it attracts to Granada and the image it projects of the city far beyond its boundaries” she commented.

For his part, Mariano Sánchez Pantoja, the coordinator of the Lorca and Granada in the Generalife Gardens programme, said that he was delighted to have Rafael Amargo, an internationally renowned flamenco artist for this the 14th edition of the programme, in particular with his version of ‘Poet in New York’, a show that is a masterful synthesis of various genres: flamenco, jazz, latin music…, a combination that he thought would fully satisfy the broad-based and eclectic audience that attends the Lorca and Granada programme.

He was especially happy to note that year after year Lorca and Granada in the Generalife Gardens receives greater coverage in national media. This strengthens his conviction that a top quality show in such a unique setting as the Generalife Theatre in a city that arouses so much interest in overseas visitors such as Granada is a sensational means of promoting our area and its artists.

He also declared that ‘Poet in New York’, which has been applauded by audiences all over the world, will find in the Generalife Theatre the grandiose setting it requires to be enjoyed in all its glory.

He finished by reminding everybody that, as always, the Ministry of Culture has set some very attractive prices so that this will not be an obstacle preventing people from seeing the show. Admission tickets cost €32 each. However there are discounts with the traditional special offer of two tickets for the price of one on Tuesdays, Wednesdays and on 3rd August and discounts for unemployed people, pensioners, students, youth-card holders, tourist-pass holders and visitors to the Alhambra and Generalife Group of Monuments, who can buy tickets at €20 each.

Tickets can be purchased at all El Corte Inglés stores, on their website (www.elcorteingles.es ) and by calling 902 400 222. In Granada, they are also on sale at the Teatro Isabel La Católica (until 31st July) and at the ticket offices in the Generalife (until 16th July).