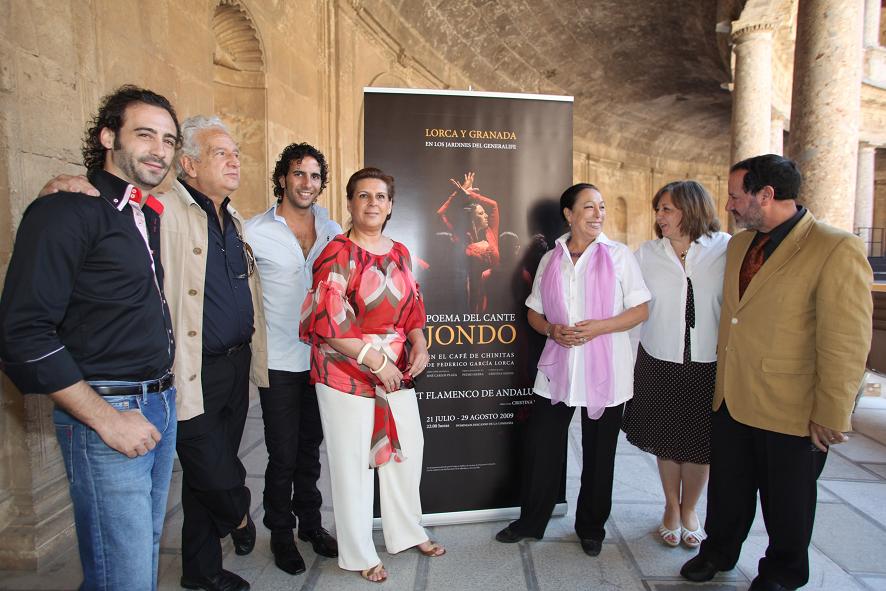 This year the performances will take place from July 21 until August 29, Mondays to Saturdays (no performance on Sundays), at 22:00

The Andalusian Minister of Culture has presented the spectacle Poema del Cante Jondo in Federico García Lorca´s Café de Chinitas, within the Program ‘Lorca and Granada in the Generalife Gardens’, celebrated for 8 consecutive years. This play will be taken to the stage by the Ballet Flamenco de Andalucía, directed by Cristina Hoyos, with José Carlos Plaza at the head of the stage management, and Pedro Sierra as the music conductor. This year the performances will take place from July 21 until August 29, Mondays to Saturdays (no performance on Sundays), at 22:00.
With this spectacle, the Regional Ministry of Culture opens again the series that from its beginning had taken very good acceptance; after seven years and more than 360.000 spectators, this program has turned into an outstanding figure within the summer programming in Andalusia and, as the numbers reveal, in one of the projects of major popular acceptance of those carried out in Spain.
Poema del Cante Jondo has been conceived, as Cristina Hoyos indicates, “in a singing café with crystal lamps and green mirrors”. For its authors, the Café de Chinitas is the perfect scenery, where exuberant shows of El Zorongo, El Vito, Los cuatro muleros and many others contrast in a fascinating way with the austerity and the truth of Cante Jondo (Flamenco Singing).
The atmosphere created in this piece is dream / nightmare, raising emotions or sensations of solitude, flight forward provoked by desperation by means of drugs, alcohol or easy sex. There personages are impure, opposite to the purity of Cante Jondo; dirty, opposite to the cleanliness of Cante Jondo; and elusive and cowardly, opposite to the valor and force of Cante Jondo.
Who is interested in the spectacle Poema del Cante Jondo in the Generalife Theater can get tickets (20 € each) whether in the shopping centers El Corte Inglés and Hipercor in all Spain, in the ticket offices of the Access Hall to the Monumental Complex of the Alhambra and the Generalife or in Teatro Isabel La Católica. Furthermore, a 50 % discount will be offered to tourists visiting the Alhambra, pensioners, unemployed, students, owner of the Bono Cultural or of the Carnet Joven, and for those persons who purchase their ticket until July 20. Every Monday, there is the special offer 2 for 1 until the closure of the spectacle, next August 29.