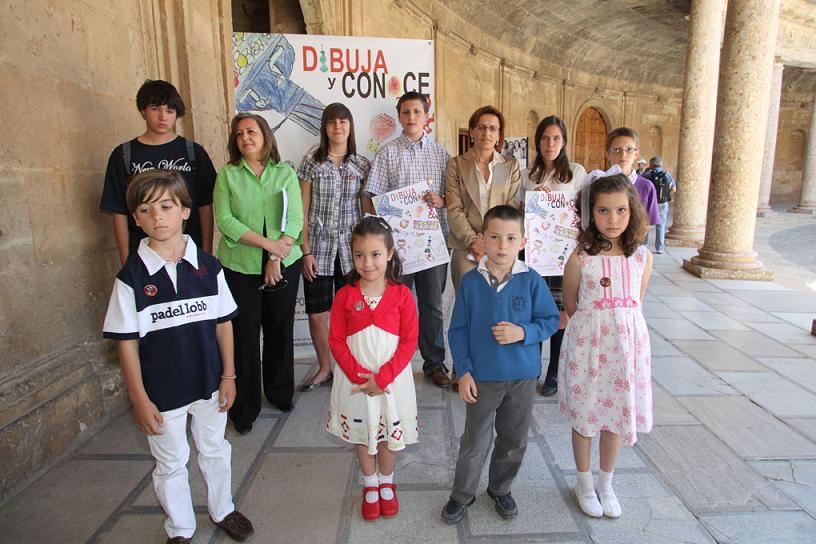 The Director of the Patronato de la Alhambra y Generalife, Maria del Mar Villafranca Jiménez, and the regional education delegate of Andalusia in Granada, Ana Gámez, have this morning handed the awards to the scholars taking part in the 7th edition of the contest “Draw and know the Museum”, for pupils of primary and secondary schools. Also the activities planned for today have been presented, on the occasion of the celebration of the International Museum Day, whose this year´s motto is Museums and Tourism.
In January, February, March and April, 1776 students from Granada city and province, belonging to 32 different school centers, have taken part in the program called Draw and know the Museum of the Alhambra.
The jury of this 7th edition has been composed by Carlos Villalobos and Miguel Ángel Moleón Viana, professors at the Faculty of Fine Arts in Granada, and Juan Mata Anaya, professor at the Department of Education of Language and Literature at the University of Granada. Lucía Orellana Zapata, scholar from the primary school Salesianos San Juan Bosco in Granada, was the winner of the first award for drawing; whereas David Sevilla Serrano from the primary school Juan XXIII Cartuja (Granada) has been finalist. With regard to the category 7 to 8 years, the first award went to Matías Estrella Aroza from the primary school La Presentación, and finalist has been Sandra Garrido García from the primary school Cristo de la Expiración in Torre Cardela.
In the section 9 to 11 years, Sergio Sánchez Pérez from the school Colegio Cristo de la Yedra in Granada was the winner, and Andrea Quintana Ruiz from the primary school Colegio El Zagal in Cenes de la Vega has been finalist.
With regard to the category of Know the Museum of the Alhambra for the pupils of secondary schools, who have written an essay on the piece of the Museum that has most attracted their attention, the winner of the section 12 to 14 years was Esperanza Ramírez Moreno from the school Sagrado Corazón de Jesús in Granada; whereas finalist has been Miguel Medina, scholor from the secondary school IES Bulyana in Pulianas.
In the category 15 to 17 years, the best essay was written by Maria de los Ángeles García Márquez from the secondary school IES Trevenque in La Zubia, whereas Rubén de Frutos Altolaguirre from the secondary school IES Albayzín has been finalist. After the awards ceremony, the assistants have visited the virtual exhibition installed in the Hall of the Palace of Charles V.
Activities planned for the International Museum Day
The Patronato de la Alhambra y Generalife has organized an intense day with activities on the occasion of the International Museums Day  in order to place the Museum of the Alhambra in the vanguard of using new technologies of social communication and to offer to the visitor the possibility of approaching heritage in a didactic and innovative way.
During the whole day, the Museum of the Alhambra will remain opened by way of exception from 9:00 to 14:30, and guided tours conducted by volunteers will be realized, from 10:00 to 13:30.