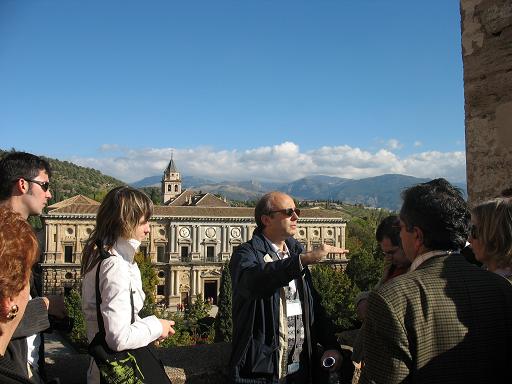 The Patronato de la Alhambra y Generalife starts up next Friday, March 27th, a new edition of the program “Guided visits by specialists”, which begins with a cycle dedicated to “The daily life in the Alhambra”. This activity will take place every Fridays, from 16:00, and Saturdays and Sundays, at 10:00, and it lasts until the next month of June.
Those interested in taking part in this program must reserve the tickets in advance in the office that the Patronato de la Alhambra y Generalife has opened in the Corral del Carbón (from Mondays until Saturdays from 10:00 to 14:00 and from 16:00 to 20:00, and every Sunday from 10:00 to 14:00) or by this telephone number 958 22 11 18. The price of each visit is 6 Euros and the minimum age to register is 12 years.
The doctor in medieval history of the University of Malaga and researcher of the CSIC, Virgilio Martínez Enamorado, is the person in charged of opening the season with a tour about the religious practice in the Nasrid Alhambra, planned for next Friday from 16:00. On the following day, the archaeologist Eva Moreno has planned to enter the Arabic Baths of the Alhambra; whereas Paula Sánchez Gómez has designed a tour through the daily life in the Medina of the Alhambra.
After Easter Week holidays, the guided visits return, on the 17th of April, to the programme of the Patronato de la Alhambra y Generalife, with a cycle dedicated to the “Poetical visions of the Alhambra”, that begins with the guided visit by the professor of literature of the University of Granada, Andrés Soria, through the Baroque collection of ballads in the Alhambra. On the following day, the poet José Carlos Rosales is going to discover the poetry of the 20th century and its relation with the monument, and on Sunday, 19th of March, “The Alhambra as scene of the work by Federico García Lorca” is the conductive thread of the visit of the professor of literature of the Autonomic University of Madrid, Mario Hernández Sánchez.
“The painted Alhambra: Sorolla, Fortuny and Rusiñol” is the protagonist of the guided visits by specialists on the weekend of the 24th, 25th and 26th of April, and will be done by Javier Moya Morales, Emilio Escoriza Escoriza and Francisco González de la Oliva.
“The Alhambra and the water” is included in the program of guided visits during the month of May. The historian María Cullel has programmed her visit, about the function of the water in the palatal city, foreseen for Friday 8 of May, whereas the hydraulic system of the Alhambra is the conductive axis of the guided visit by the professor of medieval history of the UGR, Antonio Malpica, foreseen for the 9th of May. The historian Nani Biedma Molina makes her tour through the visions of the water in the Nasrid Palaces.
In the second half of May, the guided visits by specialists takes as a reference other contemporary visions of the Alhambra, are done by Carlos Bruzón, Julio Juste and Bernardino Líndez. “The historical restoration in the Alhambra” is the argument chosen by the architect of the Patronato de la Alhambra y Generalife, Francisco Lamolda, for its titled visit “The architects in the recent history of the Alhambra”, on May 22nd. On the other hand, the main professor of the University of Granada, José Manuel Rodríguez Domingo concentrates during its visit on the decorative restoration of the Alhambra: from the Contreras family to Modesto Cendoya, and the archaeologist Carlos Vílchez, dedicates his tour to the interventions done by Leopoldo Torres Balbás.
The nature in the Alhambra puts the finishing touch to the visits of May. The professor José Tito Rojo explains in his route the eight centuries of gardens in the Alhambra; the biologist Manuel Martin dedicates the visit of Saturday of May 30th to the Nasrid Fauna, and Manuel Casares analyses the passage of time in the gardens of the Alhambra. The program of guided visits by specialists will finish in June, with a glance through the music, done by the writer and journalist Rafael del Pino; by the director of the International Festival of Music and Dance of Granada, Enrique Gámez, and by the director of the Center of Musical Documentation of Andalusia, Reynaldo Fernández Manzano.