The Patronato de la Alhambra presents the crop 2008 of the oil of the Dehesa of the Generalife, extracted from centenary olive trees 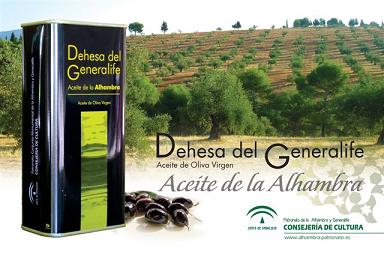 The Patronato de la Alhambra y el Generalife has announced the results of the crop of olive oil of the Dehesa of the Generalife during 2008, date in which there has been gathered a total of 8,727 kilograms of olive extracted from centenary olive trees and 3,180 have been packed in cans.

At the beginning of 2003, the Patronato de la Alhambra y el Generalife started the labours of cultivation and utilization of the olive groves of the Dehesa of the Generalife together with others placed in other attached estates of the Monument (Alixares, environment of the Cemetery, Cerro del Aire, Huerta de la Mercería). In total, it is a cultivation of more than 52 hectares and 4,722 olive trees, of which we have to highlight the importance of their centenary character. Nowadays, the Oil of the Alhambra is inside the parameters of conversion towards the Ecological Agriculture.

In its most, the type of olive tree that is situated in this zone is the known as “Lucio”, ancient exclusive variety of the province of Granada, present also in scanty measure, in the North regions of The Vega and in Temple-Alhama. This one is a variety that, though it is slightly productive, since it is only productive in the terminal parts of the sprouts, it possesses a notable historical and cultural interest, for its agronomic singularity and for its elderly attachment with the Monumental complex.

The fundamental objective of putting in value these olive groves, from the landscape, cultural and territorial perspective, is that it has directed the system of utilization of the area into to respectful formulae with the nature and the environment, which it has allowed the Board of the Alhambra and Generalife to stimulate the cultivation of the “Dehesa del Generalife” in the Andalusian Association Committee of Ecological Agriculture.

Throughout these years, there have been designing methods of cultivation of these areas as well as of crop, manipulation and transport of the olive, obtaining, from one year to the next, major qualities of oil progressively.

For the grinding and packing of the olives, we had the collaboration of the company Hermejor de la Reina, S.L., whose olive-oil mill is located in the country house of Angulo in Villanueva de la Reina (Jaén), which posses some of the best and more modern facilities of this type, capable of guaranteeing the trace ability of the olive and the produced oil.

Equally, the Council of Agriculture and Fishing has given technical assistance in this project, through its Food-processing Laboratory in Atarfe, who has carried out the analytical tests of the harvested olives.

The interested in acquiring this exclusive product, can do it in the Bookshops of the Alhambra (Monumental complex of the Alhambra and Generalife); Club of the Gourmet of El Corte Inglés; the shop Oliver (Plaza Trinidad in Granada); Al Sur de Granada (Elvira street); Juan House Delicatessen (Hispanidad avenue, in Santa Fe); La Yedra Restaurant; La Oliva shop (Rosario street); Parador of San Francisco, Oil olive Museum of Vélez de Benaudalla (Granada); Treasures of Granada shop (Nigüellas, Granada), and in the internet sites www.aceitevirgen.com and www.directodelcampo.com