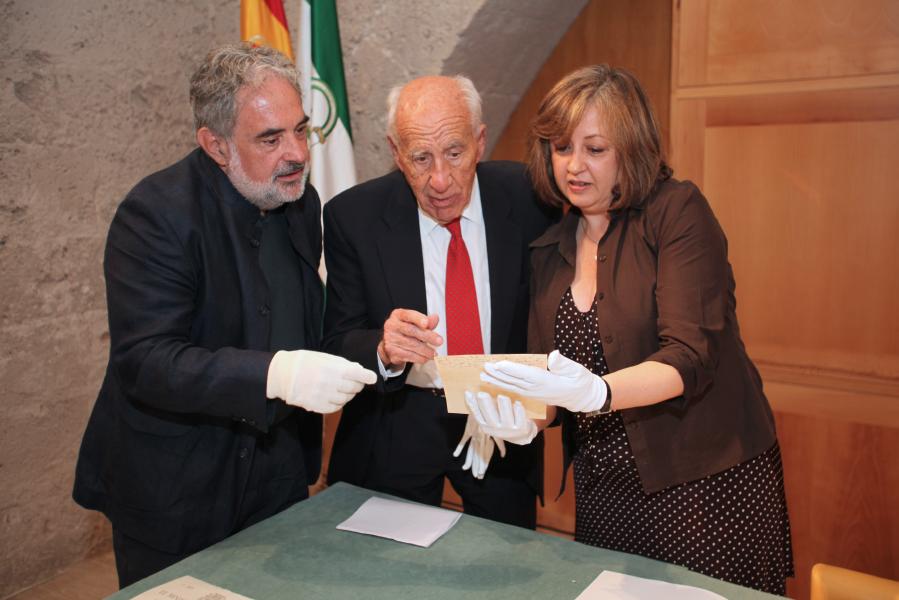 From now on, the Archive of the Patronato de la Alhambra y Generalife will hold the legacy of the architect Leopoldo Torres Balbás (1888–1960), considered to be one of the Architecture Curators of the most important monuments in the 20th century. This morning at the Palace of Charles V, María del Mar Villafranca, Director of the independent body, accompanied by the son of Torres Balbás, Rafael Torres Márquez, has presented part of the collection acquired by the Alhambra, site where he held an appointment as Architecture Curator between 1923 and 1936. The collection consists of his diary, personal letters, photographs, postal cards, engravings, maps, drawings, caricatures, and others.
The collection Torres Balbás, valued at EUR 90.000, is divided into the personal archive, the photographic collection and library, containing ca. one thousand five hundred items (books, magazines and separates from specialized publications on Christian and Islamic Medieval architecture and archaeology. To that one should add the items already held by the Library of the Alhambra, as well as by the libraries of the School of Architecture of Madrid (Escuela de Arquitectura de Madrid) and the Museo Valencia de Don Juan, where he was Director and where part of his collection was incorporated at his request.
The photographic collection of Torres Balbás consists of photographic glass and acetate plates from the 1920s and 30s, of different monuments he was responsible of or he has seen in his many journeys, as well as of his restoration works. These items reveal a portrait of Spain during that moment.
In the Archive, materials from his teaching activity as professor of History of Architecture, from 1931 to 1958, have been found: scripts of his research works and publications, in which is notable that he rigorously dealt with themes in relation to architecture and city planning; his sketch book with sketches of monuments he saw during the journeys in the summertime of the first 1920s, etc. This series are extremely important for researchers intending to learn more about the moment in which the modern conservation of Spanish heritage was born and fields like Hispano-Islamic architecture and city planning was outlined and developed.
In addition to this, the Torres Balbás collection acquired by the Patronato de la Alhambra y Generalife contains correspondence from the architect with colleagues and public figures he was friend with (Conde de las Infantas, Gómez-Moreno, Falla, Lambert, Terrasse, Marañón, etc.); diaries from his youth and from the war, rife with experiences and reflections; photographs of himself and his family; documents from his parents and his brother and sister.
The significant contribution made by this committed researcher and professor grounds on his theoretical thinking, expressed in many different scripts, as well as on his practical experience, which mainly has taken form in his interventions in the Alhambra and the Generalife. We owe mostly to him the actual Alhambra we can see today.