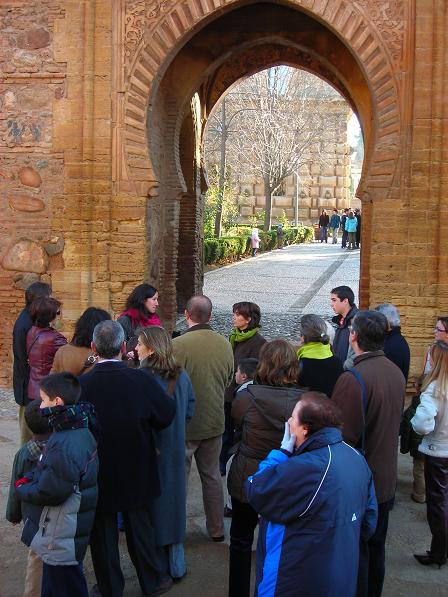 Impressive increase of visitors from Granada, with 150,000 visits for their leisure time to the surroundings of the Complex

In spite of the current context of crisis and the decline on the number of visitors choosing Spain for holidays, the Monumental Complex of the Alhambra and the Generalife has received 1,951,951 visitors in 2009. Tourist, educative and cultural activities are included within these figures, which comprise those visits to the Monumental Complex (2,070,098 visitors), its surroundings and areas with free admission (270,410 visitors), the Museum of the Alhambra (202,895 visitors), the Museum of Fine Arts (166,357 visitors) and temporary exhibitions (242,191 visitors).
In addition to these figures, 77,413 visitors have been lured by different cultural activities, like the concerts taking place during the International Festival of Music and Dance in the Alhambra (22,298 visitors), the Ballet Flamenco de Andalucía with its spectacle Poema del Cante Jondo (with 50,875 visitors),  the Homage to Manolo Caracol in the Patio de los Aljibe court (500), Eva la Yerbabuena’s performance in the Hay Festival Alhambra (900), the doors open days to visit the palace and gardens of the Generalife (1,200 participants) and the Cines del Sur Movie Festival (with 1,500 people attending the opening and the closing ceremony in the Palace of Charles V), among other activities.
María del Mar Villafranca Jiménez, Director of the Patronato de la Alhambra y Generalife, has presented today the report on the touristic, educative and cultural activities in 2009, drawn up by the Data Analysis Unit belonging to the autonomous body. This report shows that the Monumental Complex is the most visited Spanish monument again, in spite of a 4.89 % decrease compared with the figures obtained in 2008, due to the current context of crisis. Also it is confirmed that the reason for the increase in the cultural demand  is the offer by the Alhambra of several cultural activities, such as the visit to museums and exhibitions.
The report highlights, in terms of monthly distribution of the visitors to the complex, that the 10th October was the day with the highest capacity, since the totality of the tickets were sold (8,474); while the day with the lowest capacity was the 16th December, with 1,672 tickets sold. The daytime visits are the most demanded, with 89.23 %, followed by the visits to the Gardens (6.81 %), the evening visits (2.84 %), the Alhambra Tourist Pass (0.70 %) and the sporadic access cards (0.43 %).
Visitors are also drawing special interest to the cultural landscape of the Alhambra and Generalife. In this regard, the aforementioned study indicates that the surroundings and the free areas have received 270,410 visitors. In 2009, especially impressive was the increase of visitors from Granada who have chosen the surroundings of the Monument for their leisure time, having reached 150,000 visitors. This figure means a rise of 40.29 % compared to 2008.
In terms of the distribution according to the type of visitors, the report underlines that particular visitants represented 64.17 % of the monument capacity, followed by the organized trips representing 29.43 %, and by the cultural-institutional visits, representing 6,40 % of the capacity.
The Monumental Complex of the Alhambra still is mainly visited by EU-residents, representing 43.10 %, followed by the Spanish tourism (40.47%), indicating an increase of 5.81 % compared to 2008, and by the rest of nationalities (16.44 %). The same figures occur when dealing with group visits, since the Europeans represent 55.59 %, followed by the Spanish tourism (25.09 %) and the rest of nationalities (19.31 %).
The visitor’s profile has a specific chapter in the report on the touristic, educative and cultural activity within the Monumental Complex of the Alhambra and Generalife. Most of the tourists visiting the Alhambra are Europeans, between 30 and 60 years old, with academic education and qualified occupation, and when they leave the Monument they have got a high or very high level of visit satisfaction. The most valuable characteristic is the good state of preservation of the buildings, the maintenance of the gardens and the cleanliness.
Furthermore, the consolidation of the booking and advanced ticket selling system through the concession holder Serviticket is confirmed by this report, used by 65.21 % of the visitors.
Monumental Complex of the Alhambra and Generalife