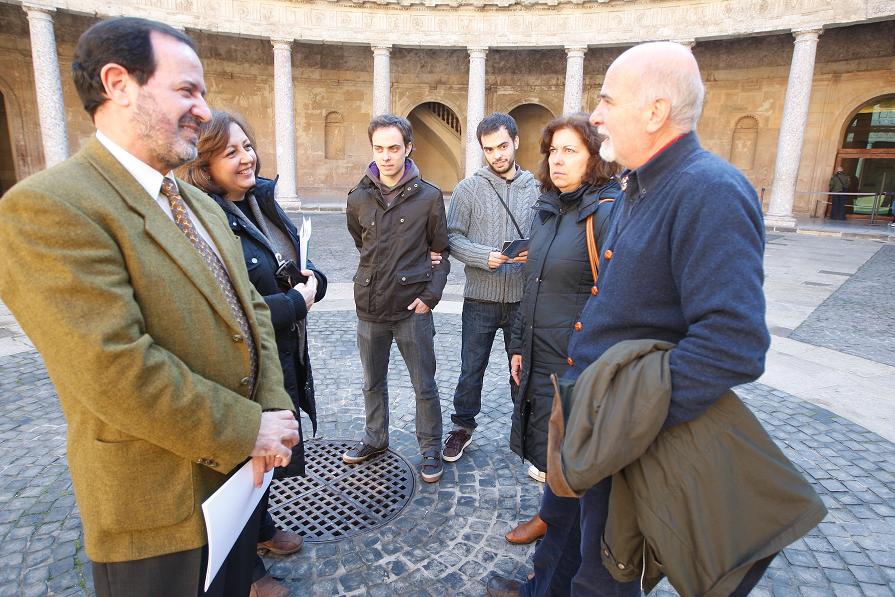 María del Mar Villafranca, Director-General of the Patronato de la Alhambra y Generalife (PAG), and Pedro Benzal, Regional Director in Granada of the Ministry of Culture of the Autonomous Government of Andalusia, have presented today the report on educative and cultural tourism in the site in 2010, drawn up by the Data Analysis Unit. This report shows that the Monumental Complex is again the most visited Spanish monument, with more than three million visitors (3,345,311), which implies a slight increase with regard to the two preceding years, when the first symptoms of economic crisis had been noticeable.
The Director-General stressed in her speech that the monument still is the “main tourist attraction” of Granada and Andalusia, since it is again the most visited site in Spain, after leaving behind the decreasing trend during the last years. The analysis has also proved that the cultural consumption has increased, by means of the Alhambra’s offer of visits to museums and exhibitions as well as other cultural activities.
Regarding the kind of visiting activity, the report proves that the educative and cultural visit to the Alhambra represents 64.88% of the total visits, with 2,170,437 visitors choosing the Alhambra for their leisure activity. The exhibitions are ranking second with 24.07% of the visits, i.e. 805,233 visitors. These figures were followed by the Museum of the Alhambra (5.63%), the Museum of Fine Arts (5.41%) and the ‘Summer in the Alhambra’ programme, representing 0.01% of the visitors.
In addition, the report recorded 58,158 persons, who have not been included in the total number of visitors, attending to different cultural activities, such as the concerts taking place during the International Festival of Music and Dance in the Alhambra (22,284), the Ballet Flamenco de Andalusia with its show Poema del Cante Jondo (32,216), the Homage to the Orquesta Ciudad de Granada at the Palace of Charles V (2,000) as well as different courses and other cultural activities taken place within the Monumental Complex (1,658).
Concerning this point, the Director-General has highlighted that the increase of the figures of Monumental Complex has been substantially influenced by two exhibitions of great interest: Lions: Restoration of a symbol (588,217) and Matisse and the Alhambra (99,920). But also The Alhambra Grows: 25 years of heritage acquisition (53,209) and Washington Irving: 150 anniversary (55,858), closed on 28 February 2010, have “stepped up” the Alhambra’s cultural offer.
The report highlights, in terms of monthly distribution of visitors to the complex, that April 30 was the day with the highest capacity, since 100% of the tickets were sold (8,704); while the day with the lowest capacity was December 16, with 1,645 tickets sold. The months with the highest number of visitors recorded have been May (233,628) and August (233,213). In terms of the most demanded visit type, the daytime visits are in the top position, with 87.28% of the visits, ranking second the visits to the Gardens (8.01%), and in the following ranks, evening visits (3.15%), Tourist Pass (0.86%), visits of the landscape and urban surroundings (0.17%) and sporadic access cards (0.52%).
Visitors have started to be especially interested in the cultural landscape of the Alhambra and Generalife. In this regard, the aforementioned analysis proves that the surroundings and free areas of the Alhambra have received 291,110 visitors. In 2010, especially impressive was the increase of visitors from Granada who have chosen the surroundings of the Alhambra for their leisure activities, having reached 164,579 visitors. This figure represents a rise of 9.72% compared to 2009.
In terms of the distribution according to the type of visitors, the report underlines that particular visitors represented 61.53% of the monument capacity, followed by the organized trips representing 33.02%, and the cultural and institutional visits, representing 5.46% of the capacity.
The Monumental Complex of the Alhambra have been mainly visited by residents in Spain, representing 45.11% of the visits, ranking second the EU-residents (36.22%), mainly visitors from France and Italy, and third the visitors from other countries (18.67%). In 2010, the number of Spanish visitors has lived an increase (4.64%), the same as the one of non-EU visitors, compared to the visits by EU-citizens, which has fallen 6.88%.
With regard to the profile of the school children attending the programme ‘Education in the Alhambra’, the report proves that 49% of them are from Granada city and province, ranking second the children from the rest of Andalusia, representing 47.18%, and third, those from the rest of Spain (3.33%).
The visitor’s profile has a specific chapter in the report on the educative and cultural tourism within the Monumental Complex of the Alhambra and Generalife. Most of the tourists visiting the Alhambra are Europeans, between 30 and 44 years old, with an academic education and qualified occupation, and when they leave the Monument they have got a high or very high level of visit satisfaction. The most valuable characteristic they specify in this regard is the good state of preservation of the buildings, the maintenance of the gardens and the cleanliness.
Furthermore, the consolidation of the booking and advanced ticket selling system through the concession holder Serviticket is confirmed by this report, used by 68.21% of the visitors, i.e. 3% more than in 2009, ranking second the ticket selling system of the Alhambra (30.92%) and third, the Tourist Pass, with 0.87% of the access tickets sold.
The use of new technologies has positively influenced the promotion of the knowledge about the monument. In 2010, 650,000 visitors entered the PAG web site (Alhambra), which is 22% more than in 2009, with an average time on site of 14.33 minutes, i.e. 17% more than in the last year. Most of these virtual visitors have academic education (69.60%) as well as qualified occupation. It is worth noting that visitors from 160 countries entered the web site, although most of the visitors surfing the PAG web site are Spanish. Most of the users from other countries are from the USA (4.80%), followed by users from Germany (3.99%), France (3.46%) and the UK (2.69%). Another significant detail of the report is the recorded number of users of the Bluetooth service at the Monumental Complex, which totals 31,739 visitors who have downloaded the software to their mobile phones in 2010.