The Minister of Culture and Sport of the Regional Government of Andalusia presents the project for the Tourist Train connecting the Alhambra with Granada and the Albaicín. 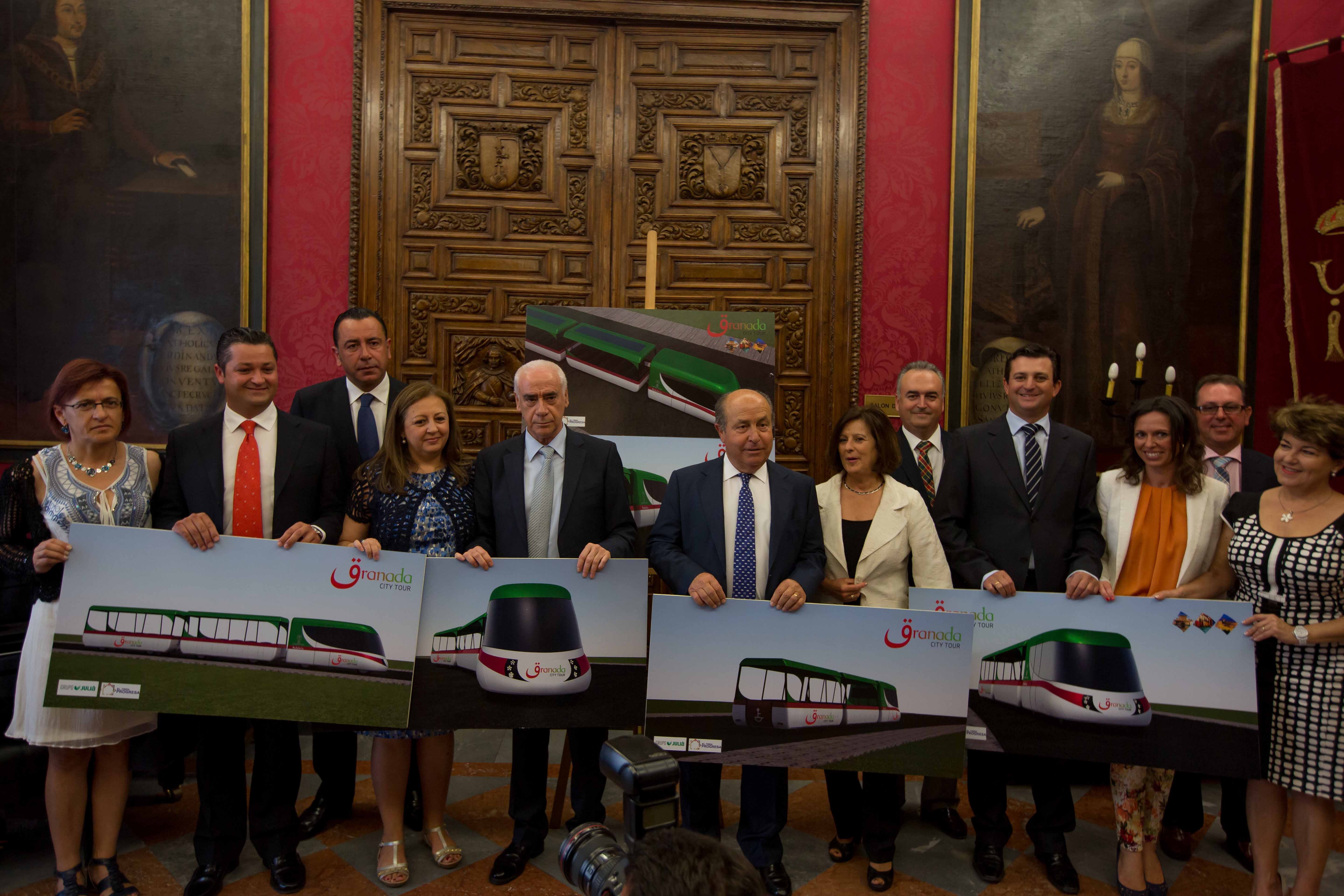 This morning the Minister of Culture and Sport of the Regional Government of Andalusia, Luciano Alonso, and the Mayor of Granada, José Torres Hurtado, presented the project for the new tourist train connecting the Alhambra with the city of Granada and the Albaicín, which is due to enter service in September.
The event was also attended by representatives of the Grupo Julià, José Adell, and El Tren Progresa S.A, Luis Miguel García, managers of the joint venture company that was awarded the tender for the Granada City train service, together with the Delegate of the Regional Government of Andalusia in Granada, María José Sánchez Rubio, the Director of the Council of the Alhambra and Generalife, María del Mar Villafranca Jiménez, the Provincial Delegate for Education, Ana Gámez, and the Councillor for Tourism of Granada City Council, Rocío Díaz.
The new tourist transport service will follow a route around the city’s most emblematic areas and will consist of four hybrid vehicles with two carriages, each with a capacity of 30 people. The launch of this service will provide jobs for 15 people in this first initial phase.
In his speech, Alonso emphasized that the project was the fruit of consensus between various public administrations as part of their commitment to “the city and its people, which will undoubtedly improve accessibility and mobility for the tourists who visit Granada. The cultural sector plays an important role in tourism; one out of every four people chooses Andalusia because of the cultural activities it offers. This new means of transport is a tourism product in its own right, complementing the cultural and heritage attractions of Granada, to which it adds value and helps promote”.
The new hybrid vehicles, which have required an investment of 1.5 million euros, will travel at a maximum of 25 km/h. Their gas emissions are 40% lower than conventional trains.
The Granada City train will run every day of the year with an approximate frequency, depending on the season, of 15 minutes. Two routes are planned: a daytime route of 8.4km which will last one hour and will visit some of the most important places in Granada –Plaza Nueva, Paseo de los Tristes, Placeta de Abad, Calle Alhóndiga, Calle Molinos and Paseo del Generalife, among others- starting off at the Alhambra, going down the Cuesta de Gomérez and returning via the Cuesta del Caideiro; and a night-time route of 3.5 km lasting 30 minutes, which sets out from Plaza Nueva goes along the river along the Carrera del Darro up into the Albaicín and back to Plaza Nueva along the Calle Elvira.
On this question, the Minister of Culture and Sport made clear that the “Alhambra has a strong commitment to Granada and its heritage. Two weeks ago we ceded the use of part of the Casa de la Estafeta to the City Council to improve the tourist information service about Granada. The Department has also taken on new responsibilities in the Rodríguez-Acosta Foundation, through the Council of the Alhambra and Generalife; We are also taking part in the events organized to celebrate the Millennium of the Kingdom of Granada; Through the Council of the Alhambra we have made an application for the Darro Valley to be officially declared an Asset of Cultural Interest. All the different institutions must continue to work together, pulling in the same direction. Cooperation is fundamental”.
The price of this new tourist service for adults will be 6€ for those doing the full circuit and 8€ for those who want to make an unlimited number of trips in the same day (hop-on hop-off). Those over 65 will pay 2€ for a complete circuit and 4€ for the hop-on hop-off service; while children under 8 years of age will travel free either way.
Granada City Council will be offering, in collaboration with Granada City Tour, discounts for residents of the Albaicín Quarter, who can buy a 10-trip ticket at a special price just by presenting their Identity card. This will be free for over-65s.