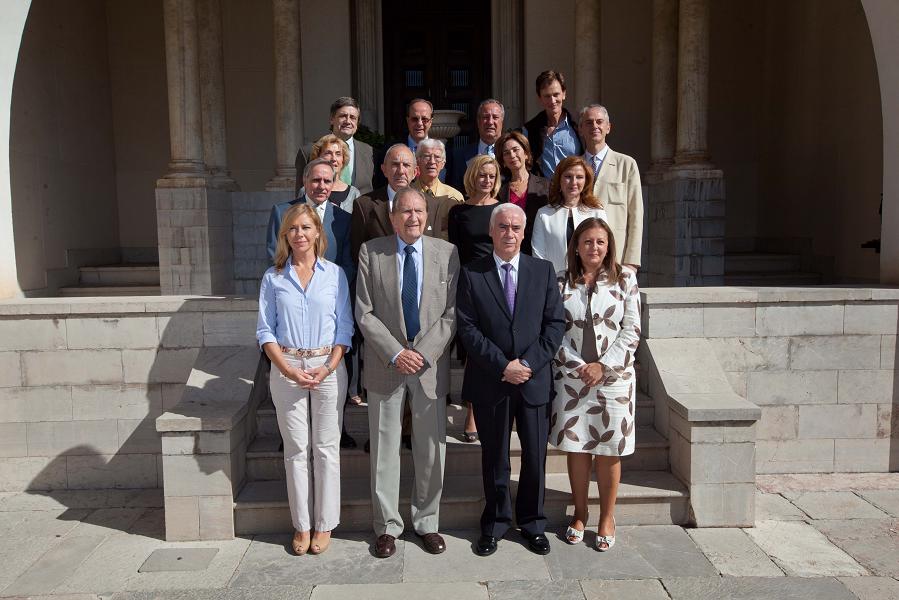 Following the meeting between the Patronato, the Culture and Sports Department of the Junta de Andalucía (Regional Goverment of Andalucia) and the Patronato de la Alhambra are integrated as new governors, after the alterations to the statutes

The Rodríguez-Acosta Foundation is beginning a new phase. This morning Luciano Alonso, the Minister of Culture and Sport of the Junta (the Autonomous Government) of Andalucía, has presided over the swearing in of the new members of the Patronato of this Granada organization, after the signing of the agreement of collaboration between the Patronato de la Alhambra y Generalife and the Foundation, therefore ensuring its conservation and maintenance. At the same time, the future of this Carmen (traditional Andalusian house), a National Monument since 1973, is guaranteed, together with its cultural activity.

From now onwards, the president of the Patronato of the Foundation will be the artist, Miguel Rodríguez-Acosta, together with five patrons of honour: the Regional Minister of Culture and Sport, Luciano Alonso; the Vice-chancellor of the University of Granada, Francisco González Lodeiro; the chairman of Caja Granada, Antonio Jara, and the ex director-general of the UNESCO, Federico Mayor Zaragoza, the latter being a lifetime title.

The Rodríguez-Acosta Foundation will also have ten members, as proposed by the Foundation, and nine proposed by the Junta: the Vice Minister of Culture and Sport, María del Mar Alfaro; the general secretary for Culture of the Regional Government, Montserrat Reyes; the director-general of the Patronato de la Alhambra y Generalife,
María del Mar Villafranca, and the director-general of Cultural Property, Elia Rosa Maldonado. Among the members designated by the Regional Ministry of Culture and Sport there are personalities of recognized prestige in the field of Arts, Letters, and Cultural Heritage, such as the architect Victor Pérez Escolano, the journalist Pilar del Río, the ex-director of the International Music and Dance Festival of Granada, Enrique Gámez, the director of the Picasso Museum of Málaga, José Lebrero and the artist Soledad Sevilla.

This agreement means that the Junta is extending its capacity for action on an Andalusian Asset of Cultural Heritage to bring it closer to public patrimony, therefore becoming involved in the management of an establishment of local, regional and national reference.

The maintenance of the building, which safeguards the legacy of the Gómez-Moreno family, must also be kept up. Among the activities to be carried out are the organization and planning of cultural and research activities, in preparation for opening to the public within the proposal put forward by the Monumental Complex in collaboration with other organizations in the city.

The director-general of the Monument, María del Mar Villafranca, and the president of the Foundation, the artist Miguel Rodríguez-Acosta, have signed this agreement, which will remain valid for the next five years. The integration of the Junta (Regional  Government) into the Rodríguez-Acosta Foundation will be possible by means of a public subsidy to the amount of 341,000 Euros for 2012. This sum will be included in the annual budget of the Patronato de la Alhambra y Generalife, which will also provide other material and personal resources.

In order to deal with its new status, it has been necessary to modify the present statutes of the Foundation, although “it will continue to maintain the same philosophy, respecting the ideology of the founder, José María Rodríguez-Acosta, the autonomy, objectives and staff”.

To make the regular functioning of the organization more operative, an Executive Commission is being created, presided by the President of the Foundation together with the director-general of the Patronato de la Alhambra y Generalife, which will ensure the compliance of the agreements reached.

The Rodríguez-Acosta Foundation was created in 1941 by the testamentary legacy of the painter José María Rodríguez-Acosta. It is based in Granada, in the Carmen built by the founder, between 1916 and 1939, next to Torres Bermejas and near the Monumental Complex of the Alhambra y Generalife. Its objectives, among other things, are to promote and spread culture, developed by means of cultural programmes: grants to artists for Educational Centres in Fine Arts, both national and abroad, competitions, exhibitions, conferences, seminars, recitals and publications concerning research about studies on Andalusia and Granada.
The artistic and documentary collections of the Rodríguez-Acosta Foundation were enriched by the donation of the Gómez-Moreno family in1973. That donation led to the creation of the Institute of the same name and with the donation of the work and library of Granada painter Manuel Maldonado, in 1988.