The Gardens of Light that inspired Sorolla 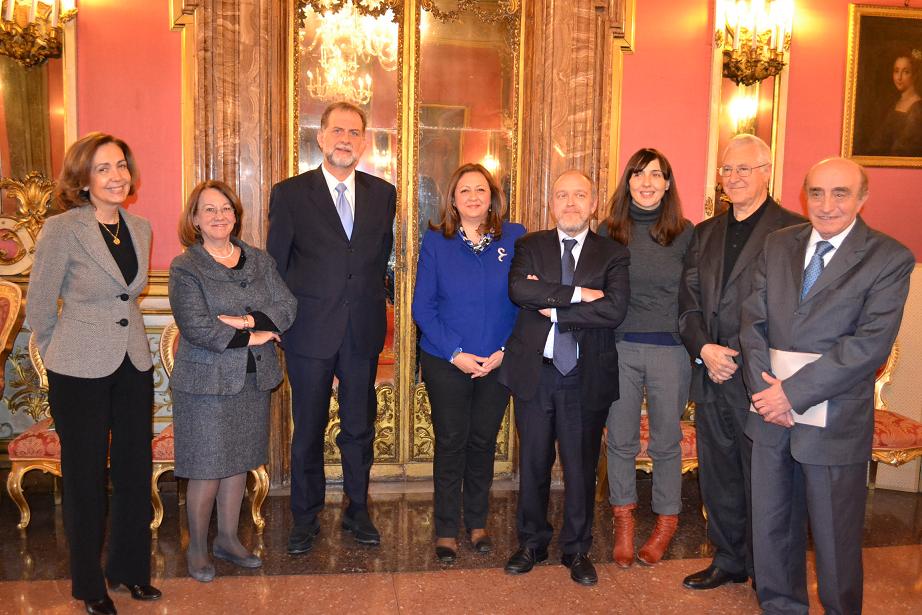 Director of Patronato de la Alhambra y Generalife and representatives from the Palazzo dei Diamanti, Ferrara (Italy) and Madrid’s Sorolla Museum present travelling exhibition, due to reach the Alhambra this summer, at Spanish Embassy in Rome

Valencian artist Joaquín Sorolla (1863-1923) will return to the Alhambra this summer with his Gardens of Light, a travelling exhibition that will have three different settings: the Palazzo dei Diamanti, seat of the Gallerie d’Arte Moderna e Contemporanea di Ferrara (Italy), the Palace of Carlos V Museum of Fine Arts, in Granada, and Madrid’s Sorolla Museum. This morning, representatives from the three institutions – María Luisa Pacelli, María del Mar Villafranca and Consuelo Luca de Tena, respectively – presented the project, which will see the light this spring at the Palazzo dei Diamanti in Ferrara, where the Sorolla’s works will be exhibited for the first time in Italy.

Also present were Alfonso Lucini, Spanish ambassador to Italy, Tiziano Tagliani, mayor of Ferrara, and Mario Canella, director of Ferrara Arte, along with representatives from the Italian general and specialised media art press, all of whom welcomed the project with great interest.

When it goes on show in the Granada Museum of Fine Arts, on the upper floor of the Palace of Carlos V, Sorolla: Gardens of Light will be made up almost 60 pieces, including 37 from Madrid’s Sorolla Museum, one from the J. Paul Getty Museum, on show in Spain for the first time, and 20 from major Spanish and international private collections.

Sorolla. Gardens of Light is broken down into seven sections (Earth, the Alhambra, Water, Courtyards, Gardens, Characters and the Garden of the Sorolla House), all contributing, without a doubt, to a better understanding of the work of the Valencian painter, who continued to reflect on the possibilities of his art until the very end of his life. The exhibition focuses on a crucial moment in the creative life of the painter, the years of his full maturity and, specifically, the works arising from his fascination with gardens and his meeting with Andalusia, which affected him so deeply as to make him remodel the poesy and style of his work in his later years.

In Andalusia, Sorolla, considered one of the most fascinating figures of the Spanish art world of the 19th and 20th centuries, discovered a subdued richness, a source of poetry, contained in shady corners, the murmur of water in the fountains and in the silence of sun-bathed courtyards. His own garden, planned and laid out at that time, further transmitted and amplified his metamorphosis.