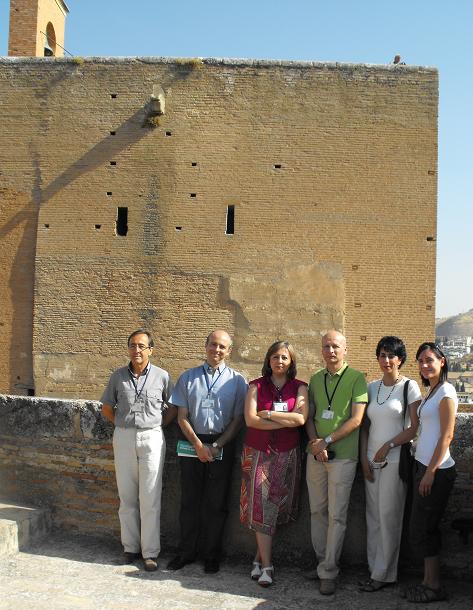 The director of the Patronato de la Alhambra y Generalife, María del Mar Villafranca, has visited this morning the tower Torre de la Pólvora, located in the area of the Alcazaba; right before it has been opened to the public after two years closed for restoration works. The Servicio de Conservación y Restauración (Conservation and Restoration Service) of the independent institution has been responsible for carrying out this intervention which resulted in the discovery of a 16th century platform for artillery, later transformed into the garden Jardín de los Adarves preserved until today.
In the restoration works, several buried structures were detected, which are the proof for the possibility of lower levels in the parapet walk and inside the tower. This is the reason for the use for the first time in the Monumental Complex of non-destructive archeological prospection methods based on the Ground Penetration Radar, supervised by the Grupo de Electromagnetismo de Granada under the University of Granada.
The information obtained by means of these methods, as well as the record of all actions undertaken in advance, have been introduced in a data bank that will allow the Servicio de Conservación y Restauración of the Patronato de la Alhambra y Generalife to program necessary action plans to complete the study and interpretation of the entire area, formed by the Torre de la Pólvora and the wall that surrounds it.

The restoration works began with the repair of the wall that forms this garden to guarantee its architectural preservation and its visual recovery, since it has been completely covered of climbing vegetation, hiding the wall from the visitor´s view from outside the area.
To complete that action, the recovery of the original level of the parapet walk was necessary, which in the 16th century had the function of supporting two small cannons to defend the bottom of the wall. The passage of time, with successive transformations, had notably modified this site, and even the top part of the wall parapet has been covered. In the course of the intervention, the filling ground accumulated in the last four centuries has been removed in a controlled way and, at the same time, two jardinières, that had been affecting the wall placed beneath them, have been demolished. During this action, the Servicio de Conservación y Restauración of the Patronato de la Alhambra y Generalife has found two merlons for artillery, unique in their design in the Alhambra, between which the cannons were pointing on the bottom of the wall.
The Patronato de la Alhambra y Generalife has opened the Torre de la Pólvora for visitors with access to the Monumental Complex, on Tuesdays, Wednesdays, Thursdays and Sundays of July, 8:30 to 20:00, presenting their General Access Ticket.