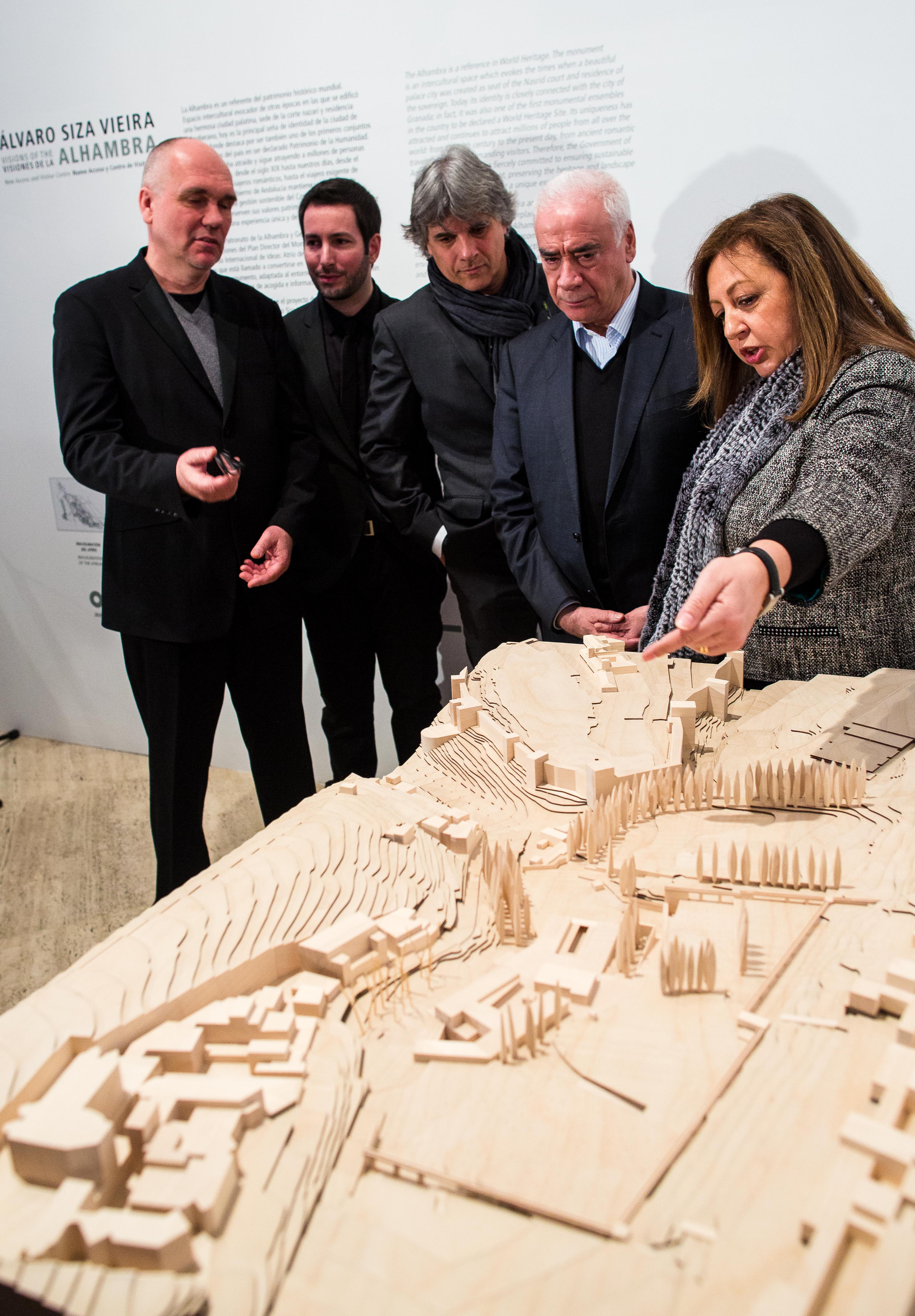 The Minister of Education, Culture and Sport presents an exhibition on the project by the master architect Álvaro Siza entitled “Puerta Nueva de la Alhambra”, which won the International Ideas Competition for the design of a new visitor entrance to the Monument

The ‘Visions of the Alhambra’ of the Portuguese architect Álvaro Siza (Oporto, 1933) are the central feature of the exhibition which, from today 9th February until 19th April, will be on display in the Crypt of the Palace of Charles V where the “maestro of maestros of architecture” can see the project which he described as the “dream of his life” take shape.
This morning, Luciano Alonso, the Minister of Education, Culture and Sport of the Regional Government of Andalusia made excuses for Siza, who due to a slight illness was unable to travel to Granada and therefore did not accompany the Minister today at the presentation of this project. The exhibition, which is backed by the Berlin International Forum on Architecture and Urban Design (Aedes) and the Council of the Alhambra and Generalife, comes to the ancient fortress today after its visits to the German capital and the Vitro Museum in Basle. “This exhibition is undoubtedly a huge international showcase for the Alhambra of the 21st-century, via a cultural project which blends past, present and future” said Alonso.
The Puerta Nueva (New Gate) project designed by Álvaro Siza and Juan Domingo Santos (Granada,1961) won the International Ideas Competition organized by the Alhambra in 2010 to choose a project for its new entrance pavilion and visitor information and welcome centre, which will have a final budget of 45 million euros. The approximate schedule for carrying out the building work is five years and it is hoped that the first stone will be laid next year in 2016.
Visiones de la Alhambra / Álvaro Siza has almost 50 exhibits including numerous sketches for the Atrium of the Alhambra project by Siza, the winner of the prestigious Pritzker Prize in 1992, generally considered as the Nobel prize for architecture. It also has scale models, execution drawings and 3D representations, which will allow the public to get a closer look at the Puerta Nueva project, a creation to which Siza himself says in the exhibition catalogue “I have devoted myself body and soul. Each project is a challenge, but this one is mythical”. There are also 5 audiovisual exhibits, including a trailer for the short film Dificilísimo. Puerta Nueva de la Alhambra, (Enormously Difficult – New Gate of the Alhambra) by the film director Juan S. Bollaín.
The exhibition also has numerous pieces which demonstrate the “close links “that Siza and Juan Domingo Santos have with the Alhambra. Álvaro Siza first visited the monument with his parents when he was a boy: “I was fascinated. I came back later several times, on occasions accompanied by great aficionados of the Alhambra who helped me immerse myself in its history”, a joy he has often acknowledged.
For María del Mar Villafranca, the Director of the Council of the Alhambra, the Atrium of the Alhambra “is a great cultural project in itself. This new reception area presents a huge challenge to combine past, present and future in a way that relates especially well with its privileged surroundings, which predispose our visitors to the experience of enjoying heritage in an organized way and with the chance of understanding it better from the perspective of an advanced architectural concept”.
After its stay at the Alhambra, the exhibition will go on show at the National Museum of Art, Architecture and Design in Oslo (May 2015) and at the Aga Khan Museum in Toronto (from July 2016 to January 2017). This exhibition project was made possible thanks to the enthusiasm shown by the Berlin International Forum on Architecture and Urban Design (Aedes), through its director, Hans-Jürgen Commerell, who stressed that “we couldn’t wait to see the exhibition in context, in the Alhambra, in the place for which Álvaro Siza conceived this project”.
To coincide with this exhibition, the Alhambra has organized a lecture/debate, which will be held this afternoon from 17:45h in the events room at the Palace of Charles V and for which access will be free until all seats are taken. One of the architects behind the project, Juan Domingo Santos, will be explaining his “Reflections and visions on the Atrium of the Alhambra”. The event will be chaired by the Director of the Monument and by its Architect-Conservator, Francisco Lamolda, who will also be taking part in the debate.
The Puerta Nueva project will involve the reorganization of the different entrances to the Alhambra, a task which the two architects believe “will be complicated” and in which the insertion of the building into the landscape and its relationship with the surrounding area and with the archaeological remains will all be decisive features.
The Alhambra and the Generalife were declared World Heritage Sites in 1984 by UNESCO. The Council of the Alhambra and Generalife is the body responsible for the protection, administration and conservation of the monument together with all its buildings, woods, gardens, cultivated fields and grounds, and for the drafting and development of the plans that must be followed in the conservation, restoration, excavations and research that must be carried out and in general all things relating to them, affecting them and that maybe carried out within their boundaries and adjacent areas.
The Council of the Alhambra and Generalife meets the needs of protection and conservation of this important, exceptional piece of heritage and it does so from a modern conception of cultural heritage that goes beyond its historical and artistic value to cover the preservation of the surrounding environment and its landscape dimension, as befitting the Alhambra’s position as part of the historic and artistic heritage of the city of Granada.
For more information, please visit www.alhambra-patronato.es