The Alhambra’s patrimony is growing 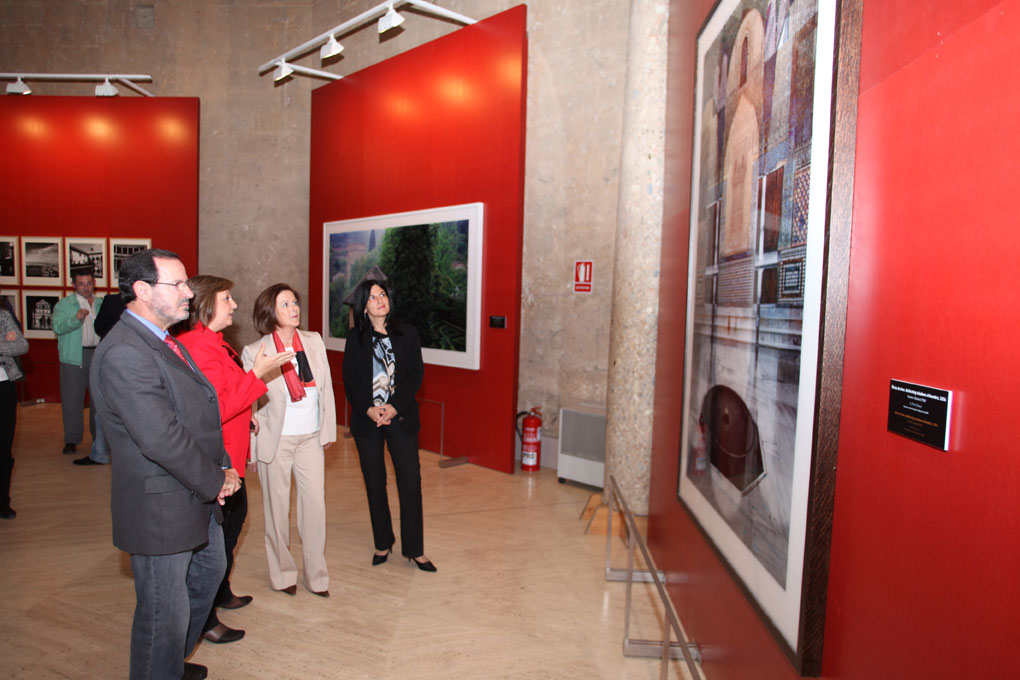 The representative of the Andalusian government in Granada and the Director of the Autonomous Body visit an exhibition, which shows part of the acquisitions made in 25 years of independent management

This afternoon, María José Sánchez Rubio, representative of the Autonomous Government of Andalusia, and María del Mar Villafranca, Director of the Patronato de la Alhambra y Generalife, have visited the exhibition La Alhambra crece (“The Alhambra Grows”) in the Chapel and Crypt of the Palace of Charles V, accompanied by Pedro Benzal, Regional Director of Culture of the Autonomous Government in Granada, and María Inmaculada López Calahorro, Director-General of Museums and Artistic Promotion of the Autonomous Government. The exhibition puts on display part of the patrimonial goods acquired by the Autonomous Body during the last 25 years, since 1985, when the Spanish state transferred the competence over the management of the Monument to the Autonomous Government of Andalusia.
La Alhambra crece. 25 años de adquisiciones del Patronato de la Alhambra y Generalife (“The Alhambra Grows. 25 years of acquisition by the Patronato de la Alhambra y Generalife”) is the title of this temporary exhibition, which is open to the public until June in the Palace of Charles V. The exhibition puts on display an array of 274 pieces out of more than 11,000 pieces, acquired by purchase, donation or deposit, made up by Fincas, plots of land, Nasrid objects, photographs, engravings, paintings, first editions of literary works and Modern Art pieces. With these acquisitions, the performance of the duties is obtained, regarding the “protection, increase and transmission to future generations”, in accordance with the Spanish Historic Heritage Laws 1985 (§ 1.1) and the Andalusian Historic Heritage Law 2007.
Some of the most remarkable objects of the display are the earring of gold thread and glass from the Nasrid period (14th c.) found during excavations in the Generalife, coins from the period of the Catholic Kings, an array of weapons and carbines from the Spanish War of Independence, an oil painting by Aureliano de Beruete y Moret (1845-1912), a photo album of Jean Laurent (19th c.) with ca. 140 photographs, works by David Roberts and Frederick Lewis (19th c.) and Modern and contemporary photographs by Valeriano López, Bae Bien-U, Fernando Maqueira and Adrian Tyler, amongst others, as well as capitals, gorroneras (upper door hinges) and a display of plasterwork pieces from the plaster workshop of the Santisteban family, recently acquired, with a total amount of 4,500 pieces.
There is an audiovisual section in the exhibition with the display of film documentaries from 1905 of the Pathé film studios, which has recovered its film stock, which has been dispersed in film libraries all over the world, with the project Audiovisual Memory of the Alhambra. Also the movie ElDorado, set in the Alhambra and directed by Marcel L’Herbier in 1921, is on display.
Immovable goods
Furthermore, the people who come to the exhibition will know more about, by means of an audiovisual presentation, the immovable goods acquired in the last 25 years by the Autonomous Body, with the aim of fostering the interplay between the Alhambra and Cultural Landscape. In order to carry out the policy of recovery and acquisition of immovable goods related to the Monument, the Alhambra has used a large extent of the financial funds generated by the touristic visits to the Complex. In particular, a total amount of EUR 26.444.731,71 have been invested, divided in different budgets of several financial years, for the incorporation of the plot of land of Los Alijares (136,496 m2), the property called Carmen de Bravo (1,341 m2), the building called Hotel Reuma (2,378 m2), the property called Carmen de los Catalanes (19,280 m2) and the one called Carmen de Bellavista (5,750.50 m2).
Location: Chapel of the Palace of Charles V
Dates: Until 6 June, 2010
Times: Monday to Sunday, 9:00–20:00.