The Alhambra receives the Hispania Nostra Prize for its new signposting system. 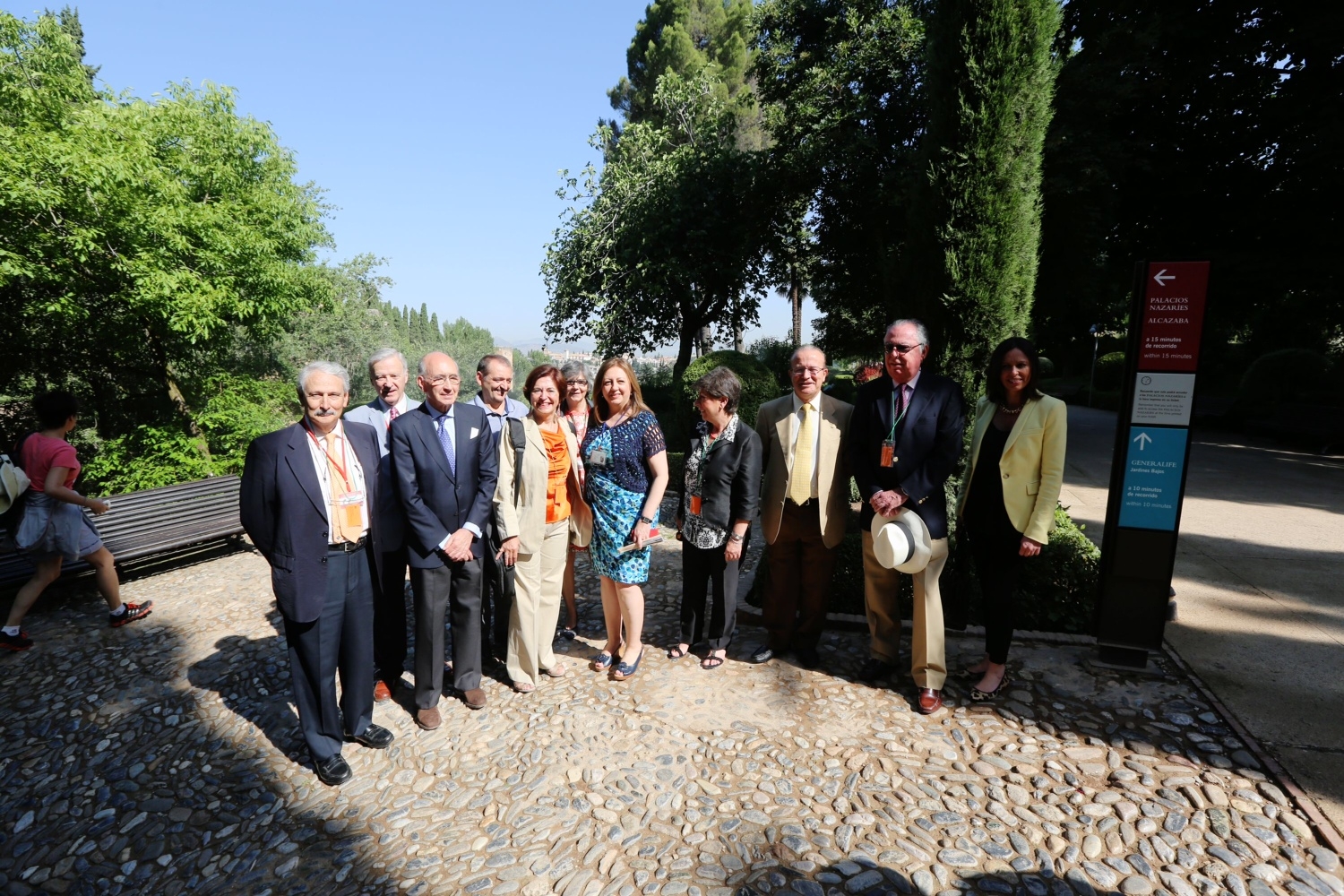 This morning the Alhambra received the Hispania Nostra award for the new signposting system installed in its Group of Monuments...

This morning the Alhambra received the Hispania Nostra award for the new signposting system installed in its Group of Monuments. From today, a plaque in the Entrance Pavilion at the Generalife will commemorate this prize, presented jointly by the Banco Santander Foundation in recognition of the Alhambra’s good practice in the conservation of our cultural heritage.
The Director of the Council of the Alhambra and Generalife, María del Mar Villafranca Jiménez, accompanied the President of Hispania Nostra, Araceli Pereda Alonso, in the unveiling of the commemorative plaque. The jury that selected the winners praised the Monument’s signposting system because it achieved “the necessary balance between the maintenance and conservation of this legacy, perfectly integrating its signposting into the landscape of the complex, minimizing its impact”.
“The signposting project is part of a larger initiative set out in the Master Plan for the Alhambra and Generalife. Our greatest challenge has been to provide the Alhambra with new signs that help the tourists who visit us to find their way around the monument, so enabling us to channel the flow of users towards tourist and cultural areas of general interest”.
In addition to the Alhambra’s signposting project the Hispania Nostra Prize 2013 was also awarded to the Riverbank Park in Pamplona, the University of Alcalá de Henares for its “permanent commitment to the recovery of our cultural heritage”, and the project for the conservation, enhancement and promotion of the ancient olive trees in the Sénia area (Castellón, Tarragona and Teruel).
Throughout the weekend, heritage experts will be taking part in sessions for debate and reflection organized by the Hispania Nostra Association in the Palace of Charles V. After the inaugural session, the Director of the Alhambra, María del Mar Villafranca Jiménez, is scheduled to give a lecture entitled The Cultural Landscape of the Alhambra and its Heritage Value. Later, Rafael Mata Olmo, Professor of Regional Geographic Analysis at the Autonomous University of Madrid will be talking about The European Landscape Convention. In the afternoon it will be the turn of María Linarejos Cruz, the coordinator of the National Plan for Cultural Landscapes at the Spanish Cultural Heritage Institute (IPCE).
On Saturday Joan Nogué i Font, Head of the Landscapes Observatory of Catalonia will be taking part in a meeting to talk about Rediscovering place: change in the paradigm, civil society and landscape. This will be followed by a Round Table discussion about Cultural Landscape between the landscape architect, Ana Luengo Añón, and the former Director of Culture and of Cultural and Natural Heritage of the Council of Europe, José María Ballester.
In the afternoon, the architect Pedro Salmerón, the art historian Ángela González and Miguel Ángel Troitiño, Professor of Human Geography at the Complutense University in Madrid, will be discussing the Urban Landscape, while the Agrarian Landscape will be the main theme for discussion in the last debate session with José Castillo, Professor of History of Art  at the UGR, and José María Martín, the Director of the Observatory of Spanish Historic Heritage and also a member of the UNESCO Centre of Andalusia.
The Hispania Nostra association was set up in 1976 on the occasion of “European Architectural Heritage Year” on the same lines as the Europa Nostra organization. Hispania Nostra, whose Honorary President is Her Majesty Queen Sofia, is a non-profit-making association, officially declared to be of public use. Its purpose is to defend, safeguard and promote Spanish Cultural Heritage and its surroundings. It is the only Spanish cultural association that defends cultural heritage in all its conceptual and geographical integrity.
For more information, please visit www.alhambra-patronato.es
www.hispanianostra.org