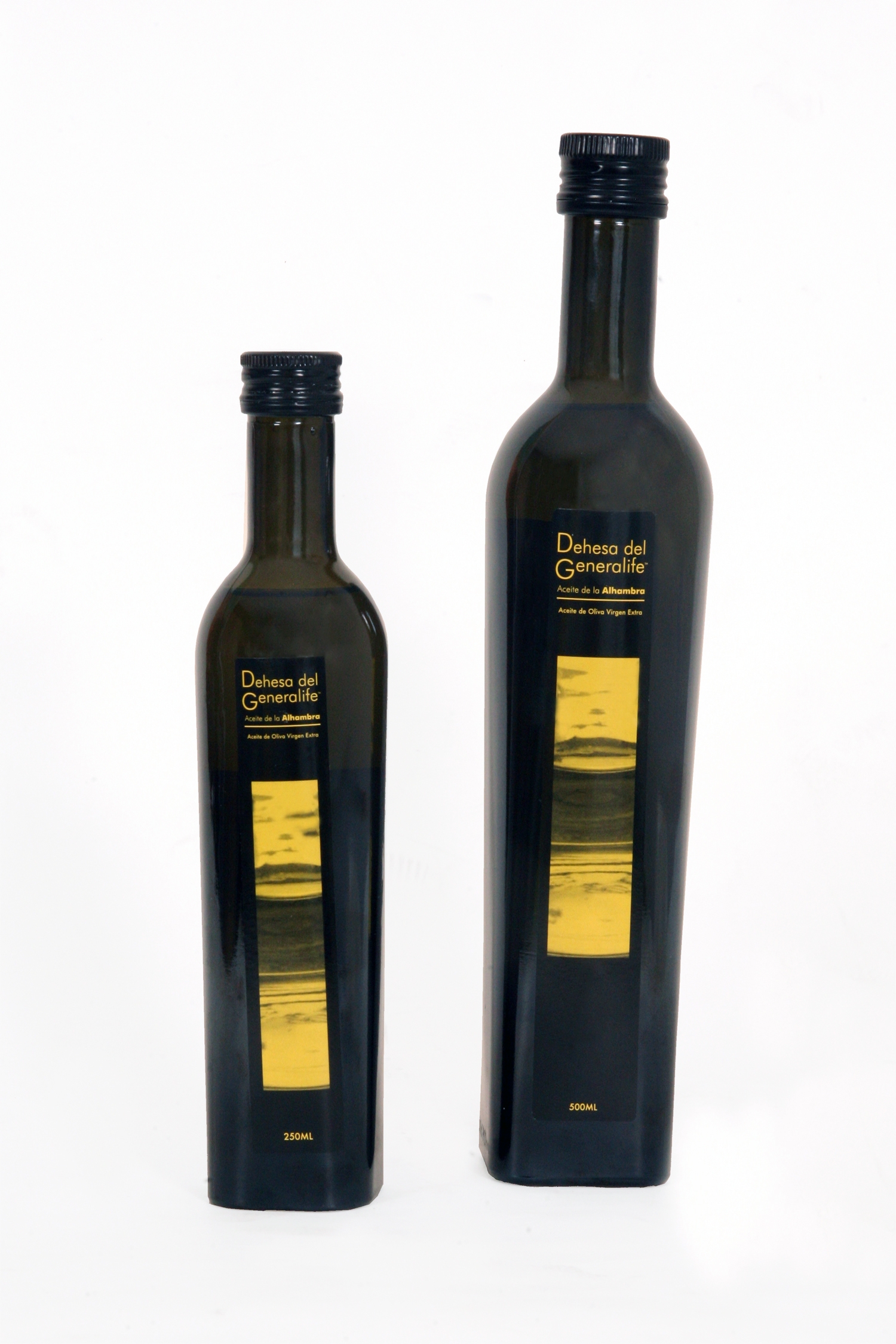 This year the ‘liquid gold’ comes in a new 250ml and 500ml glass-bottle format.

The Alhambra now has a new harvest of extra virgin olive oil from the Dehesa del Generalife. This morning the Monument’s Director, María del Mar Villafranca, accompanied by the Head of the Gardens, Forests and Vegetable Gardens, Rafael de la Cruz, presented this year’s olive oil production at the Gastrotur Trade Fair, which was being held at the Fermasa fairground in Armilla (Granada), where visitors have been able to taste this ‘liquid gold’ and savour its various qualities.
This year 20,000 kilos of olives were picked from the Alhambra’s ancient olive-trees, from which a total of 2,760 kilos of oil was obtained, a relatively low yield due to the lack of rain last winter. The oil has been packaged in 4,452 units, of which 2,000 are on sale in 500 ml tins and the remaining 2,452 in a new design in 250ml and 500ml glass-bottles. This new bottle will protect the ‘liquid gold’ it contains from the light, so as to conserve the qualities and aromas the olives had when they were picked.
The Dehesa del Generalife extra virgin olive oil is available at the Alhambra shops located at the Alhambra itself and in the centre of Granada at Calle Reyes Católicos number 40; and at a number of exclusive, carefully selected outlets.
At the beginning of 2003, the Council of the Alhambra and Generalife decided to farm the olive-groves in the Dehesa del Generalife together with others in fields around the Monument (Alixares, area around the Cemetery of San José, Cerro del Aire, Huerta de la Mercería). In total, there are over 52 hectares of olive-groves with 4,722 olive trees, many of which are centuries old.
The main variety of olive-tree in this area is the ‘Lucio’ olive, an old variety exclusive to the province of Granada, which is also to be seen in equally small numbers in the Norte-La Vega and Temple-Alhama regions of the province. Although this variety is not very productive as it only bears fruit at the tips of its shoots, it is very interesting from a historical and cultural point of view, because it is such an agricultural rarity and because of its close links with the Alhambra.
The basic objective of this project is to enhance the value and the appreciation of these olive-groves from a landscape, cultural and territorial perspective. This essential principle has guided the decision to farm the area using nature- and environment-friendly methods, and this has enabled the Council of the Alhambra and Generalife to apply for these products of the Dehesa del Generalife to be registered with the Andalusian Ecological Agriculture Committee.