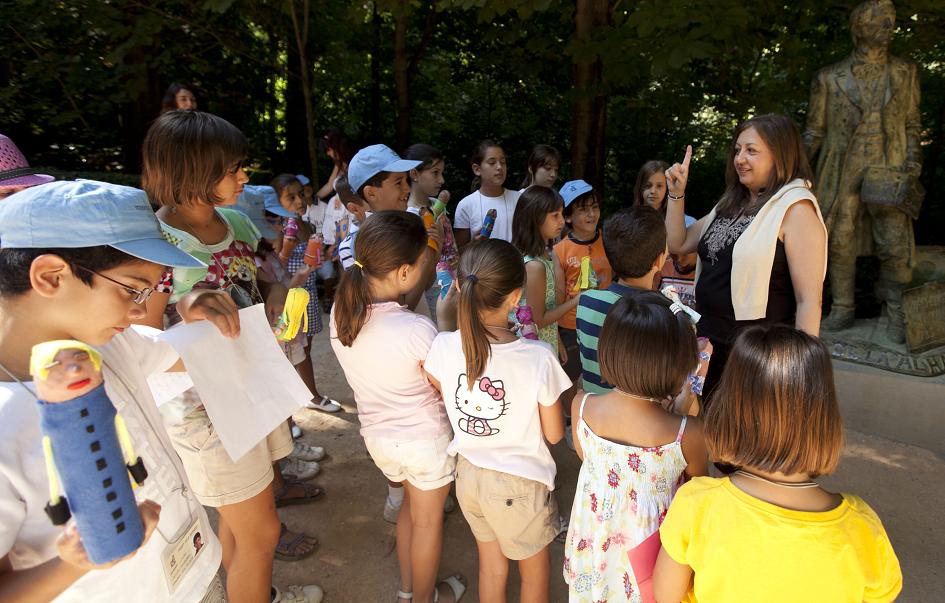 Kids play a leading role in the Alhambra summer. Throughout the month of July, 142 schoolchildren take part on an educational program, which aims to approach the Nasrid monument to schoolchildren from 7 to 14 years old offering guided tours and didactic workshops. This morning, the Director of the Patronato de la Alhambra y Generalife, María del Mar Villafranca, has been to the Gate of Justice and the Alhambra Wood to spend time with the kids who are enjoying a week of recreational activities on the grounds of the historical-artistic complex. During the tour, Villafranca has made the kids aware of the importance of preserving and taking care of “the Alhambra, a place which preserves the essence of integrity and authenticity, two paramount principles to a World Heritage site”.

This year most of the participants at “Summer in the Alhambra” come from Granada city and province. There are also boys and girls from Madrid, Burgos and even the United States. Some of them live temporarily in the city while others spend their holidays visiting their relatives from Granada. Besides it must be highlighted that many kids have decided to spend their holidays here for the fourth consecutive year.

The program combines guided tours around the monuments with workshops that develop the participants’ understanding and interpreting skills on these complex historical artistic monuments. The activities take place during a week from 8.45 a.m. to 15.15 p.m. and are developed by a group of heritage interpreters who accompany the girls and boys during this period.

Los Leones (The Lions) –the group of the younger kids, from 7 to 11 years old- will scour the Royal Water Channel, the New Gardens, the Alhambra, the Observation Point of the Lindaraja, Sorolla’s exhibition “Gardens of Light” and the Medina for a week. There the participants will learn about the different trades that may have been performed in the popular neighbourhood settled on the hill of Sabika between the XIII and the XV centuries. These visits will be complemented with workshops on incense, puppets or scale models among many other activities. Besides, kids will develop theirs skills with paintbrushes and colours.

The group of the older kids – between 12 and 14 years old- will be Las Gacelas (the Gazelles). In one of the different itineraries created for them, the kids will follow the path that people from Granada would walk to reach the zoco of the Alhambra: Alhambra, Tahona Gate, the square of the zoco, and finally they will walk among orchards to get to the Alhambra through its medieval access. They will also learn many details about the well-known Vase of the Gazelles of the Museum of the Alhambra and its relation to the Sultan.